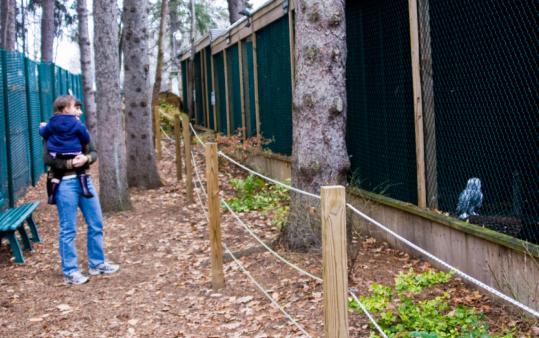 The author and her daughter, Maia Hart Smith, observe a snowy owl at Wild Wings. (Jonathan B. Smith for The Boston Globe)
By Melissa Hart Globe Correspondent / October 3, 2010

People tend to get their wings mixed up, with humorous results. It’s not unusual for Terry Kozakiewizc, director of the raptor center, to get a call like this:

“I picked up the phone and the caller said he’d like to order three dozen wild wings.’’ Kozakiewizc said, breaking into a wide smile. “I said, ‘We’ve got ’em, hon, but they’re alive.’ ’’

Wild Wings Bird of Prey Facility, at Mendon Ponds Park in Honeoye Falls, houses over 20 raptors including eagles, owls, hawks, falcons, and a vulture. Most of the birds were hit by cars and have permanent injuries ranging from vision loss to damaged wings; they cannot be released back into the wild.

Kozakiewizc makes the raptors available for public viewing five days a week year round, hoping to foster awareness and increased respect for birds of prey. Watching a barred owl soar through the sky is exciting indeed, but getting to see Hunter, Wild Wings’ fluffy resident barred owl, close-up on her perch inspires me to drive more mindfully.

The facility offers educational programs and guided tours. Participants can dissect owl pellets or paint a portrait of a live raptor on its perch. Visitors can stroll along Bird Song trail to feed chickadees, then step into Wild Wings’ colorful Cottage Store with its avian-themed gifts. Just out the back door, a tidy outdoor compound of wood and wire cages houses stately red-tailed hawks, diminutive Eastern screech owls, bald and golden eagles, and an elegant black-spotted snowy owl named Pearl.

Each enclosure gives the raptors numerous perches and room to move about, even to take limited flight. Volunteers have paid close attention to each species’ needs — brightly-colored hanging toys tempt the curious crow, and a pile of low stones provides a perfect seat for the tundra-nesting snowy owl.

My daughter was most enamored of Wild Wings’ resident bobcat, who roused herself from a nap in a bed of straw and dashed up to the fence. Tara, captive-bred and declawed, lives in a spacious cage with ramps and bridges for roaming. But while we stood there, her amber eyes remained fixated on my child.

“She sees her as a toy, hon,’’ Kozakiewizc told me, and so we retreated into the Cottage Store for hot cocoa, coffee, and cookies. Kozakiewizc explained that Wild Wings is a family affair, and that she’s the only paid employee.

“My husband builds enclosures for the birds, and my son Nick does a lot of the educational programs for kids.’’ She pointed to a grinning young man helping to restock a shelf with child-sized footballs in the shape of bald eagles and furry leopard-print purses.

Their affection for each bird is palpable. Kozakiewizc recounted the recent death of Shasta, a 25-year-old red-tailed hawk. “I’m so glad he died before he had to be cooped up for the long winter,’’ she said, and went on to relate the story of how, for the past three years, a wild red-tail had brought freshly-caught squirrels to the aging Shasta, continuing even after his fellow hawk died.