Old Town is a new treat 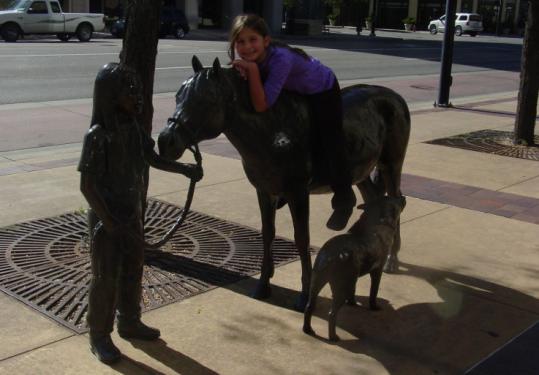 Lila Hempel-Edgers poses in downtown Wichita, which is filled with public art, much of it streetscapes meant to be discovered. (Geoff Edgers/Globe Staff)
By Geoff Edgers Globe Staff / January 2, 2011

WICHITA, Kan. — Before we start, a request: No Toto jokes. And check “we’re not in Kansas anymore’’ at the door.

There. Now you have permission to travel to Wichita.

The trouble with this city, which sits smack dab in the center of the United States, is all in the reputation. If you’re from Boston, New York, or anyplace even slightly snooty, chances are you are not going to pick this flat, Midwestern city as a vacation destination. You are more likely to consider a hipster haven such as Austin, the mountain highs of Colorado, or the isolated beauty of Montana.

But if you miss Wichita, you’re missing something. This is on-the-cusp America, a place where old ways and new styles are beginning to blend, where empty downtowns are being revived, museums founded, and unexpected treasures lie waiting in antiques stores that have not been ruined by savvy yuppies raised on PBS “junking’’ specials.

We came for the Tallgrass Film Festival, now in its eighth year, which had invited me to show my film, “Do It Again,’’ twice over the weekend. We stayed in Old Town, which has cobblestones, coffee shops, and clubs that spring to life at night.

Traveling with a baby means taking shifts. I got to go out at night, hanging out with some of the film directors in town, and, on one joyous evening, packing myself into a van for a visit to Rene’s, home of the 24-hour taco. In the morning, my wife, Carlene, got out early, heading to the local YWCA to swim laps. By the time she returned, the kids were up and ready and we hit the streets.

There we encountered two of Wichita’s main curiosities. First, we saw the incredible amount of public art, much of it made up of streetscape sculptures meant to be discovered. We had a public art guide in hand and it became a game for our daughter, Lila, 8, to find the squirrel or the turtle. (The life-size man reading the newspaper was easier.) What was strange was that on a beautiful crisp morning, there was nobody out. As we would learn, Wichita is, like so many places, a driving city by virtue of there being no traffic and a just-developing population of downtown residents. Our company for much of the morning was stationary and bronze.

We found proper lattes and a great place to hang at Mead’s Corner and, when we were properly energized, a huge, two-floor antiques mall just across the street. They had a stuffed deer going for $10,000, which we didn’t consider buying, and endless rows of colored-glasses from the 1950s, which we did contemplate purchasing. In the end, Carlene picked up a bunch of old books and I bought a record produced locally in the ’60s with original cover art by R. Crumb.

Where to eat? We were told that the Old Mill Tasty Shop was the place to go, a local institution famous for its chicken salad and milkshakes. This advice created a cycle in which I either ate foods that I felt would almost immediately kill me (chicken-fried chicken, biscuits and gravy) or jogged so I could work off those foods.

There is a world-class art museum in Wichita, but we didn’t go. There are world-class art museums in many cities, but nobody else has Cowtown, which looks to re-create Old West living circa 1870. Lila roamed the grounds, hopping onto a horse-drawn wagon at one point and mildly refusing to jump off. We took in a gunfight on the main drag, wandered through the one-room schoolhouse and funeral parlor. When we got hungry, we bought a couple of $2.50 hot dogs from a woman at the saloon.

The beauty of Cowtown and another place we visited, Exploration Place — a meld of a science and children’s museum — is that despite what you are told, they are both walkable from downtown. They’re located on the Arkansas River Bicycle Path, a paved trail whose only flaw was that there were not enough people using it.

What else did we find during our short stay: a fantastic artist co-op, Gallery XII, where we could actually afford to purchase art; a second antiques store full of ’50s jukeboxes and ’40s cigarette machines and other objects I desperately wanted to buy, but that were too big to bring on the plane; and Uptown Bistro, which allowed us to get some healthy choices (seared tuna, shawarma with homemade hummus) to offset our vacation eating habits.

When it was over, we realized just how much we had enjoyed Wichita. It only took me a day back in Boston to do a real estate search for a place downtown. No, we weren’t going to be moving to Kansas, but it was nice to dream of regular visits to the Tasty.

Where to stay
Hotel at Old Town
830 East First St.
Wichita
316-267-4800
www.hotelatoldtown.com
Inside this 104-year-old building is a sizable atrium with a piano bar, breakfast buffet, and 24-hour coffee. In the rooms are stove, fridge, and comfortable beds. About $149 a night.
Where to eat
Old Mill Tasty Shop
604 East Douglas Ave.
316-264-6500
The Kansans rave about the New York chicken salad sandwich, but the huevos rancheros, biscuits and gravy, and strawberry milkshake were our favorites. Mary Wright doesn’t just own the place, she makes the gravy. Sandwiches no more than $8.
Mead’s Corner
403 East Douglas Ave.
316-201-1900
Mead’s Corner is owned by First United Methodist Church and all its profits go to support its ministries. We learned that later. What we learned first is that the gelato is fantastic and the lattes have that “we-know-what-we’re-doing’’ froth. Panini and pastries available.
Rene’s Restaurant
677 North Eisenhower St.
316-945-0991
Looking for some 2 a.m. tacos? Stop here. You can chow down for as little as $5.