Capital melting pot? Not when it comes to food 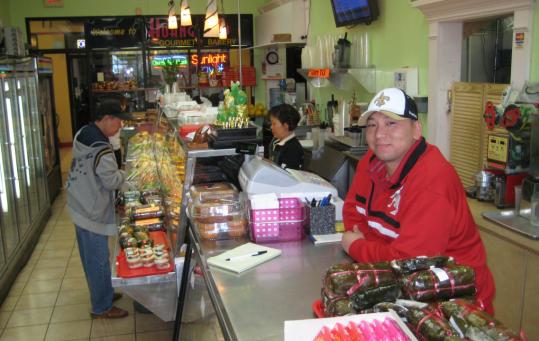 WASHINGTON — The nation’s capital gets a lot more press for its national treasures than for its international ones. But as anyone who has hailed a taxi in the city and then struggled to understand the driver can attest, it’s a remarkably multicultural place. Dozens of immigrant groups call the metropolitan area home, including large numbers of Ethiopians, Vietnamese, Salvadorans, Koreans, and many others.

That makes the District a great, if undersung, destination for new food experiences. Like recent arrivals the world over, many of Washington’s immigrants cluster in neighborhoods dotted with restaurants offering authentic, cheap food and stores selling otherwise hard-to-find ingredients. The result is a whiff of home for the immigrants, and an opportunity for a foreign-style adventure for visitors.

New and old Little Ethiopia
Scratch the surface of Washington’s civic and economic life and you’re bound to come across a number of Ethiopians. The area has long been a magnet for the East African immigrants, who first flocked to the city in the 1970s after a military government took over their country. These days, more than 30,000 Ethiopians call the area home, according to the 2008 census. Newcomers often start out as taxi drivers, but a dynamic, supportive Ethiopian community helps them quickly acclimate.

Ninth Street just south of U Street, unofficially the city’s Little Ethiopia, offers immigrants a familiar place to relax, schmooze, and talk a little business. Once riddled with crime, the block was colonized by Ethiopians five years ago. While a number of the original dimly-lighted, all-male bars still exist, the area is gradually becoming hip. The neighborhood now includes Yetenebi Restaurant, featuring baked goods and a gleaming cappuccino machine, and the Ambassador Bar and Restaurant, which offers live music on Saturday nights.

Habesha Market definitely belongs in the “new’’ camp. Unlike the other restaurants on the block, service is informal — no waitresses — and the kitchen is open and airy. Owner Dereje Zewdie says he was inspired by mall food courts, with their cheap and accessible meals. This is the kind of place where a busy cabdriver can get a quick bite, but these days it’s popular with young professional Ethiopians, too, who talk over platters of doro wot (spicy chicken stew) and Habesha tibs (beef or lamb sautéed with jalapeno and tomato) scooped up with flat injera bread. Bagged injera is for sale, as well as CDs of Ethiopian music and a variety of unusual spices like berbere, mitmita, and korerima.

Where Vietnamese mingle
It doesn’t look like much from the outside: a big Chinese-style gateway and a nondescript line of stores surrounding a large parking lot. But Eden Center is the meeting place for the mid-Atlantic region’s Vietnamese immigrants, most of whom arrived in the late ’70s and early ’80s. “This is a hub for the community,’’ said Nick Hoang, whose family owns Hoang Vy bakery, located on an indoor arcade and specializing in sweet sticky rice and avocado smoothies. “Everyone’s scattered, so they come here to mingle, eat, talk about rumors.’’

With 120 shops, you can spend hours wandering around. There are mani-pedi joints, vendors selling dragonfruit and green guavas, traditional herbalists, and cafes serving sweet Vietnamese iced coffee. All of that, though, is a diversion from the highlight: the food. There are dozens of restaurants, many offering whatever was common in the chef’s village back in Vietnam.

Hai Duong Restaurant is one of Eden’s newest-looking establishments. But the family that owns it is quick to tell how the matriarch started out as the cook in someone else’s restaurant before renting a tiny place of her own, only moving to a bigger location several years later and expanding further just six months ago. Now a daughter is taking over as chef, replicating her mother’s recipes. The specialty is banh xeo, a crispy crepe filled with shrimp, pork, and bean sprouts, but it’s hard to say no to the pho, traditional Vietnamese noodle soup that’s served with lime, basil leaves, and bean sprouts.

Latin, but not Mexican
Salvadorans make up Washington’s largest immigrant group, with 200,000 in the metro area. Many now live in the suburbs, but their traditional base is central DC’s Mount Pleasant and Columbia Heights neighborhoods. The first wave of immigrants set up camp here in the 1980s after fleeing a civil war and it is still the landing spot for many arrivals.

The area is gentrifying quite a bit, as a walk north on 14th Street from the Columbia Heights Metro station illustrates. But it still bears a pervasive Salvadoran flavor, and after a couple of blocks, new restaurants and cafes give way to a string of Latin businesses. The Panam International Market is bustling and packed to the gills with foreign foodstuffs like plantains and long swords of aloe vera.

Out on the sidewalk, trucks pull up throughout the afternoon and gaggles of men hop out in search of lunch. There are a number of simple restaurants catering to them and other residents, offering tacos, tamales, and the beef or tripe soup that’s popular with Salvadorans.

Gloria’s Pupuseria is one of the cheeriest establishments, with turquoise walls and flowered oilcloth on the tables. Owner Gloria Umana says she opened the place 11 years ago as a single mother who needed to make a living. She serves the traditional staples, as well as pupusas, corn tortillas stuffed with cheese and pork or refried beans that are accompanied by curtido, a salad of pickled cabbage and onion.

For dessert? A few doors down is Pan Lourdes Bakery, where a pineapple empanada is less than a dollar. And when the weather’s nice, a vendor sets up shop on the west side of the street, selling cut-up mango, pineapple, or jicama for $3 a bag.

Strip malls and samgyupsal
There’s something unusual about Annandale. Unlike the other immigrant neighborhoods, the area isn’t chock-a-block with shops. Instead, the community that has become Washington’s Koreatown has retained its suburban flavor, with low-lying strip malls housing real estate agents, jewelers, and florists. Most of the signs are in Korean.

Almost 70,000 Koreans live in the area; many started out owning small businesses like liquor stores and gradually worked their way up to more lucrative investments. Annandale is for them, with more than 1,000 Korean-owned businesses that cater to their middle-class needs.

The biggest draw for non-Koreans is the food. The area includes dozens of Korean-owned restaurants, including mom-and-pop places that variously specialize in tofu, porridge, seafood, and Korean-Japanese cuisine.

Gooldaegee (“Honey Pig’’) Korean Barbeque restaurant is surely one of the liveliest. The place is regularly packed with a mix of Koreans and Caucasians who sit around circular tables with built-in grills. Customers order raw meat — samgyupsal (pork belly) and bulgogi (marinated beef) are popular — and the waitress cooks it to their specifications in front of them. Rice and a number of small vegetable dishes round out the meal. With prices relatively low, colorful posters lining the walls, and loud Korean pop music blasting in the background, it’s hard not to have fun.

Amanda Abrams can be reached at manda.abrams@gmail.com.