THIS STORY HAS BEEN FORMATTED FOR EASY PRINTING
San Francisco

No matter the neighborhood, pour the Fernet 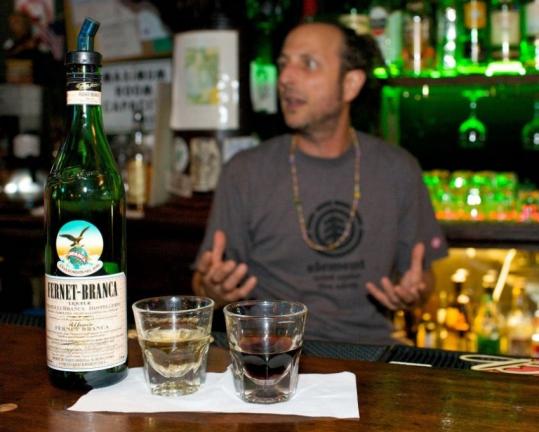 A few days before I was scheduled to fly into the city, I spotted a listing online for the 2d annual Barback Olympics, a raucous event in which the city’s “top barbacks’’ compete in grueling races that primarily involve carrying kegs, running across car-tire obstacles, and rapidly drinking beer. More remarkable than the event itself was its sponsor: Fratelli Branca Distillerie, maker of an old Milanese liquor called Fernet Branca.

If you’ve never heard of Fernet - and unless you’ve spent a lot of time in Italy or Argentina, you probably haven’t - this may not mean much. But the Fernet distillery sponsoring a drinking event in the United States is akin to a truffle-oil maker sponsoring ESPN’s X Games.

For reasons not entirely clear, San Francisco has an obsession with the inky liqueur. Ask for Fernet at most bars in New York, Chicago, or Boston, and be prepared for blank stares. But in the 49 square miles of San Francisco, where over 50 percent of the country’s Fernet consumption occurs, ordering the drink gives one automatic insider status.

From its roots as a medicinal tonic in 19th-century Italy, Fernet has held onto - and in San Francisco, has exaggerated - its mythology. Proponents say it eases the symptoms of PMS, is good for treating an upset stomach, and can cure all sorts of ills. The writer Hunter S. Thompson famously said that as long as he was drinking Fernet, he wouldn’t get a hangover (bartenders will tell you the same). The drink’s medical claims even kept it on the shelf during Prohibition, despite its being 40 percent alcohol.

My first shot was an overpowering blast to the palate, throat, and stomach, hinting at: sugarless jägermeister, menthol cough drop, and Middle Eastern and South Asian spices. Like most novices, I was totally unprepared, and not entirely thrilled, by the sensation. But a while later something funny happened: I wanted more.

In my quest to sample the beverage at some of San Francisco’s quintessential watering holes, I found Fernet to be one of those universal concepts that ties the city’s disparate neighborhoods together. After briefly stopping by the Barback Olympics at the chichi club Ruby Skye near Union Square Park, I hopped on the N-Judah train out to the Inner Sunset neighborhood, a quiet stretch of less-visited San Francisco just south of the Strybring Arboretum in Golden Gate Park.

As I walked into a friendly local dive called the Little Shamrock, which struck me as a kind of extended living room that served alcohol to the neighborhood, bartender Drew Kurzweil was pouring shots of Fernet for a pair of gentlemen quietly sitting at the end of the bar. I had been hoping to try out a couple variations of Fernet drinks that night, but it was already too late - only half a shot remained in what had been the bar’s last bottle.

Two days later I stopped by The Alembic, in Haight-Ashbury, on a tip that the bartenders there were adept at making pre-Prohibition cocktails with exotic liquors. While it wasn’t on the menu, the bartender didn’t bat an eye when I asked for a Fernet cocktail with a side of pickled quail eggs, which were bright magenta, tart, and refreshing, and a pork belly “BLT’’ topped with charred jalapeno aeoli and smoked salt.

The Alembic is a small, airy space with tall ceilings, a worn wooden floor and bar, and a significant collection of bourbons, scotches, and other whiskeys, all crossed with a Victorian aura of mixology and alchemy. When a middle-aged man at the bar asked how the bartender made a Mojito, the bartender replied, only half-joking, “Hopefully not at all.’’ The drink he poured me was a sweet and spicy mix of Fernet Branca, peach brandy, rye whiskey, Punt a Mes vermouth, Angostura Bitters, and a twist of lemon. It was a remarkable match for the quirky, yet delicious snacks, and a perfect prelude to an afternoon walk in Golden Gate Park.

At Wish, an upscale lounge in the hip SOMA neighborhood, I tried yet another unlisted cocktail: Fernet, tequila, and a splash of Pernod on the rocks. More acerbic than the drink at The Alembic, this one (which goes by a Spanish name unsuitable for print) was like a Ricola cough drop transmogrified into an alcohol beverage with a sweet anise finish. It was strong, and though the flavors folded into a cogent whole better than I would have expected, I wouldn’t recommend it for Fernet novices.

As the night wore on, I was determined to get a drink at the epicenter of San Francisco’s Fernet habit: a dive called R-Bar, on the edge of the infamous Tenderloin neighborhood. From the outside, R-Bar looks like just another beer-and-shots place tucked into a lackluster block. Beneath a generic awning, the bar’s entrance is adorned by a pair of metal outer doors (which look like prison gates) lighted by seedy red lights. Inside, however, R-Bar is more polished than the exterior suggests, with a nice mahogany bar and a clean, post-work aesthetic.

R-Bar was packed with 20- to 30-somethings of a professional tilt, a noticeable number of whom I overheard asking for Fernet with a ginger back: a shot of Fernet chased by a shot of ginger ale, the most popular way the stuff is consumed in the city. I tried a Fernet and on the rocks, a more refreshing, and less cloying, cousin of rum and Coke. On the way out, I counted roughly 40 bottles of Fernet lining a small ledge over the entrance - just a fraction of what R-Bar goes through each month in pouring nearly a quarter of San Francisco’s Fernet.

Before leaving the city, there were two things left to do. The first was to try one of the few Fernet cocktails actually listed on a menu, the “606,’’ at the popular restaurant Nopa. It was a perfectly balanced combination of Bols Genever, Fernet Branca, and Dolin Sweet Vermouth.

The second was a deviation from the trendy milieu of the food and drink industry; I wanted to see how my great-uncle and -aunt, who are both in their 80s, worldly, and live across the bay on the Berkeley-Oakland line, would react to Fernet. Here, at last, I would get a more neutral reading of this storied drink.

After gorging myself on one of my great-aunt’s mouthwatering meals - the better to test Fernet’s purported virtue as a digestif - and commencing a long game of Scrabble, I broke out the bottle. My great-aunt took a nip and gave an ambiguous poker face I interpreted as politeness. My great-uncle, who likewise appeared less than enthusiastic, noted with a slight frown: “Well, it’s interesting.’’

It struck me that perhaps Fernet was destined to remain a niche drink in San Francisco’s bar scene. But as we battled on in Scrabble, I noticed my great-aunt continuing to sip the Fernet with what eventually became an expression of relish. As she reached the bottom of the small tasting glass, a mischievous smile crept across her face - and she asked me to pour her just a little more.

Just about every bar in San Francisco, from the hipster-infused Mission to the preppy Marina neighborhood, serves Fernet Branca. A few special places:

Nopa
560 Divisadero St.
415-864-8643
www.nopasf.com
One of San Francisco’s culinary stars with an upscale bar serving finely crafted drinks. Order a Fernet-based cocktail, the “606,’’ while you wait for a table. Or stop by for an early drink before a night out in the neighborhood. Reservations recommended for dinner. Daily the bar opens at 5 p.m.; bar snacks until 6; dinner 6 p.m.- 1 a.m.

R-Bar
1176 Sutter St.
415-567-7441
On the edge of the rougher Tenderloin and upscale Nob Hill neighborhoods, R-Bar serves more Fernet Branca than any other bar in the city. A great place to order a Fernet with a ginger back, or get a Fernet and Coke on the rocks. Daily until 2:00 a.m.

The Alembic
1725 Haight St.
415-666-0822
www.alembicbar.com
Serving pre-Prohibition cocktails, a broad range of whiskeys and other liquors, and upscale bar food, The Alembic doesn’t have a Fernet cocktail on the menu - but will whip one up if you ask. Lunch noon-5 Friday-Sunday; dinner daily 5 p.m.-1 a.m. and at the bar till 2 a.m.

The Little Shamrock
807 Lincoln Way
415-661-0060
A relaxed pub that serves as an extended living room for the quiet Inner Sunset neighborhood. Always a fun place to drink Fernet while playing darts, backgammon, or any of the board games that the bar provides on a shelf in the back. Daily until 2 a.m.