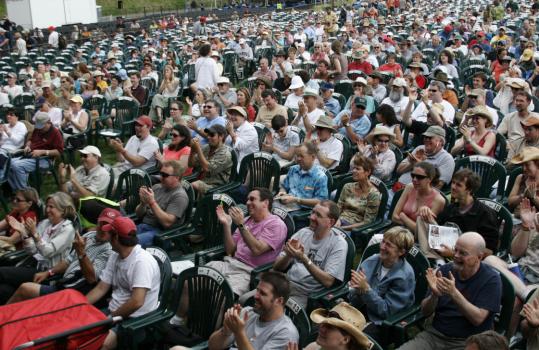 WILKESBORO, N.C. - The earplugs on my pillow were way better than the mints at a first-class hotel.

David "Dancin' Dave" Versch left them for me when I camped in one of his tents at Merlefest, a four-day musical tribute to Doc and Merle Watson held each April in North Carolina's Blue Ridge Mountains. Versch learned the tricks of festival camping, and earned his nickname, by attending bluegrass happenings for more than 20 years. He knows, for example, that bonfire jam sessions last late into the night, long after the stages have gone dark (hence, the value of earplugs).

Versch also knows that connoisseurs consider camping the best way to overnight at a music festival. My hippie son, a veteran of this sort of thing, couldn't imagine doing it any other way when we started talking about going to Merlefest. The idea of taking tents, camp stoves, and sleeping bags seemed cumbersome. But Dancin' Dave's link on the Merlefest website offered campsites where everything was set up and ready.

I had camped as a child, but never like this. I unzipped the front door to discover that our cots were up, sleeping bags open, and a little broom was stashed under the step stool that doubled as a bedside table, with a battery-operated lamp as a bonus. Camp seats and a collapsible cooler were stowed neatly in the corner, and rugs carpeted the floor.

Merlefest brings nearly 80,000 people to Wilkesboro, population 4,116. All of those folks have to stay somewhere, so makeshift campgrounds spring up in the soccer field behind the YMCA and several other places served by a fleet of shuttle buses. This has been going on since 1988, evolving from an idea to raise money for Wilkes Community College with a concert in memory of Merle Watson, who had been killed in a 1985 tractor accident.

For four days, the college campus becomes a peaceable kingdom. Old timers and mountaineers in overalls settle back in canvas chairs and tap their toes, while dreadlocked young men and women dance like dervishes. College kids gyrate in hula hoops, and some baby boomers lounge around with books to read between acts. Babies bounce up and down to the music, while their older siblings toss Frisbees and their parents stretch out on picnic blankets. It's a huge crowd, yet somehow it doesn't feel overcrowded. There is room for everybody, with fiddle strains and banjo rhythms swirling around, and friendly local folks acting like good hosts.

I followed my nose to the food tent and bought barbecued chicken from the Baptist Church ladies, and roasted corn from Wilkes County high school cheerleaders. Boy Scouts handed out program booklets covering a dozen stages. The music was as eclectic as the people who came to hear it. I started one morning by listening to the Carolina Chocolate Drops, an African-American string band. Before I crawled back into my sleeping bag that night I had heard Doc Watson, and a zydeco-folk-reggae fusion band called Donna the Buffalo. I listened to The Waybacks, Ralph Stanley, Bearfoot, the Avett Brothers, and a bunch of others. And I ran into Versch at the dance tent, where we chatted while he taught me the two-step, bluegrass style.

Versch thinks everybody gets along at Merlefest because they all come for the music, and the music is "so darned good." He also gives a lot of credit to the organizers. Versch has been coming since 1995. He got the idea for his business as he was driving home from Merlefest in 1998.

"I had seen a story on the news about a woman who has a business called Festivals International. She takes people to concerts all over the world, and gives them a first-class experience. It got me thinking about how I could do something like that," he said.

He never had a business plan. "My plan was, I better get some tents. It just happened so fast," he said. A decade later, the Dancin' Dave enterprise supports his festival habit.

"My real job is working for the road crew in my township," he said. "I accumulate lots of overtime plowing snow in the winter, and they're very flexible about letting me take that time off."

That means that about a half dozen times a year Versch can load up his truck and trailer with 20 or so tents and a lot of gear. He has created a little circuit of festivals from Florida to New York, and cultivated a presence that has turned into friendships with performers and campers.

"I meet and serve folks from damned near all over the world, including China, Australia, Austria, England, Spain, the Netherlands, Canada, and even Russia," Versch said.

An extended family of amateur pickers from Durham, N.C., camped next to me at Merlefest. The kids were teenagers, and when they weren't playing, they were listening to bluegrass on a boom box.

Amy Peters said her family started camping with Versch when the children were small. Now, they just like its simplicity.

The performers at the festivals tend to overlap, but each event has characteristics that set it apart. Versch begins his season in late March with a trip to Suwanee Music Park in Live Oak, Fla., the site of the Suwanee Springfest and Magnoliafest in October.

"This is the best physical venue of them all," Versch said. "It's in a park built just for music festivals. The main stage is in a bowl-shaped area with big oaks and Spanish moss."

The park stretches more than 500 acres, many set aside for camping, with hiking trails and a lake for canoeing and fishing.

"Amazing, spectacular, magnificent, and inspiring are just a few of the words to describe the experience," Versch said after last year's festival. "I saw Sam Bush four times: with Levon Helm, with Peter Rowan, Tish Hinojosa, Laurie Lewis, and Mike Bubb; with Doc Watson's 'Docabilly' set, and his rip-roarin' Watson Stage set on Friday night. He blistered it," Versch wrote in his blog.

How does he manage not to be overwhelmed by so many musicians, and so many things going on at once? "Just make a decision and go with it," he said. "Get it in your head that whatever you see is going to be good."

Versch said Grey Fox, held mid-July in the Catskills, is his favorite. He first tried out his camping idea here and the organizers embraced his venture.

His advice for first-timers? "Prepare for rain, and hope to be overprepared. Think Gore-Tex."

When a Saturday afternoon thunderstorm blew through Merlefest, I was sure I'd find all my gear soaked. But the tent was water tight, and everything stayed dry. On Sunday, I wore a poncho while I listened to the final acts. More rain. My son and I gathered our dry belongings from the tent and left the take-down to Versch. Slipping a bluegrass CD into the player because we couldn't bear for the music to stop, we drove away as simply as we had arrived.

Bonnie Jernigan can be reached at bonnie@heypayattention .com.