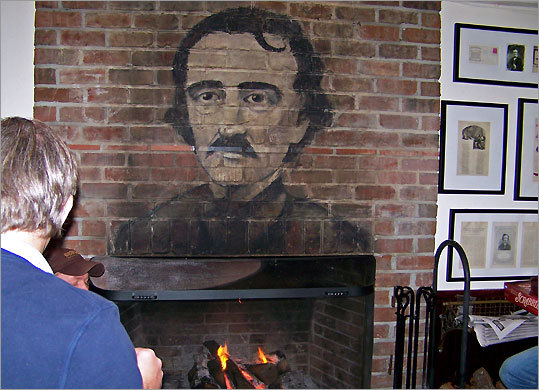 SULLIVAN'S ISLAND, S.C. - This year marks the 200th birthday of Edgar Allan Poe, and various cities who claim him as their own are holding celebrations in his honor. Poe was born in Boston on Jan. 19, 1809, lived in Philadelphia and New York, and died in Baltimore.

Only his most avid fans know that from 1827-28, he also lived at Fort Moultrie on Sullivan's Island, a spit of land off the coast of Charleston. In fact, "The Gold Bug," one of his best-known stories, is set here. "This island is a very singular one," Poe wrote at the story's beginning. "It consists of little else than the sea sand. . . . It is separated from the mainland by a scarcely perceptible creek, oozing its way through a wilderness of reeds and slime, a favorite resort of the marsh-hen."

Today, Sullivan's Island has white-sand beaches and is a favorite of vacationers and day-trippers, if not marsh-hens. But in the early 19th century, the Low Country, as the Charleston area is called, was rich in superstitions and pirate lore. Blackbeard terrorized the waters, and ghosts roamed the lands, or so it was said. It's easy to see why Poe was inspired by the place.

Destitute, he joined the Army at 18 and was sent to Fort Moultrie where he worked as a clerk and was promoted to sergeant major. The fort played an important role in both the Revolutionary and Civil wars because of its proximity to the port of Charleston. Today, it is a national monument.

Poe still haunts this sleepy island: There's a Poe Avenue, a Gold Bug Avenue, and a Raven Drive. Poe's Tavern is the island hot spot. I also visited the Edgar Allan Poe public library, housed in an old ammunition bunker carved into a hillside. At the entrance of the quirky space is a framed Audubon print titled "Raven." Coincidentally, I think, a crow flew overhead as I entered.

The librarians had decorated a bulletin board with a happy birthday banner, balloons, and all manner of Poe stuff. They had set out popcorn, cheese, and crackers. Books by and about Poe were prominently displayed. And a Poe's birthday trivia quiz was handed out to each patron. (In the poem "Annabel Lee," what killed the beautiful Annabel Lee? In "The Tell-Tale Heart," where is the beating heart found?)

Despite its name, the library isn't all about Poe; it's public, with shelves of books, magazines, and videos. Still, it attracts Poe fans from all over. On one Saturday, a man and a woman riding Harleys visited. They asked manager Jeri England about Poe, and then the man said he "felt the aura."

"I know he was in here," said the visitor.

"That's impossible," replied England. "This was built after he died."

"But I feel his spirit," insisted the man, as his companion nodded.

Then he asked England for a favor. "Would you be willing to meet me here late at night so I can pick up Poe's aura?"

Needless to say, the answer was no.

"But I do think there's a sense of him here on the island," says England, a longtime resident. (When she has time, she takes library visitors from out of town for an island tour in her golf cart).

It may not be his aura, but there's certainly a presence at Poe's Tavern. The bar/restaurant is a modern-day altar to him. Images of gold bugs decorate parking signs and the menu. The Gothic writer's visage graces posters and looks out from over the cozy fireplace. You can buy T-shirts and beer mugs bearing Poe's face, crowned by a raven.

At the top of the menu is a bio that begins: "Much like his work, the life of Edgar Allan Poe was short, tragic, and shrouded in mystery." Half-pound burgers with various toppings include the Raven, Gold Bug, Pit & Pendulum, Amontillado, Tell-Tale Heart, and Starving Artist.

Speaking of "Annabel Lee," the love lament that Poe wrote shortly before his death at 40, just who she is remains, fittingly, a mystery. Some insist it was Virginia Clemm, the cousin he married when he was 27 and she was 13. Others say it was Sarah Elmira Royster, who was engaged briefly to Poe before her father broke off the relationship.

But many in the Charleston area are adamant that Annabel Lee was one of theirs. Local legend has it that Poe was in love with Annabel Lee Ravenel whose family was of old blue-blood stock. There's evidence that Poe did befriend Dr. Edmund Ravenel, a conchologist and fellow shell-seeker, while on the island.

In an effort to solve the mystery, I went through several books at the island library and the Charleston Library Society, which calls itself the South's oldest cultural institution.

In one old book, I found a letter by a scholar who signed his correspondence only with his initials: "E.V.H." He concluded that the woman in question was, indeed, Annabel Lee Ravenel. Dissecting the poem, he quotes: "I was a child and she was a child in this kingdom by the sea." He then asks: "What could be more apt? Poe at nineteen on Sullivan's Island! And then the wind 'chilling and killing my Annabel Lee.' She doubtless had malaria which was so prevalent [here] before the discovery that mosquitoes brought chills, and not bad air. And 'her highborn kinsmen came,' the Ravenels, of course! She was Annabel Lee Ravenel! A 'fugitive from Charleston's dust and fever.' "

The last verse of the poem begins: "For the moon never beams, without bringing me dreams / of the beautiful Annabel Lee."

There are no motels, inns, or B&Bs on Sullivan's Island, and only a few short-term rentals. Your best bet is adjacent Isle of Palms, where you can rent condos, cottages, and beachfront mansions (www.iop.net/Community/Lodging.aspx?section=visitors). Historic Charleston, half an hour away by car, has excellent hotels and inns (www.charleston.com).