Pittsburgh goes with the flow 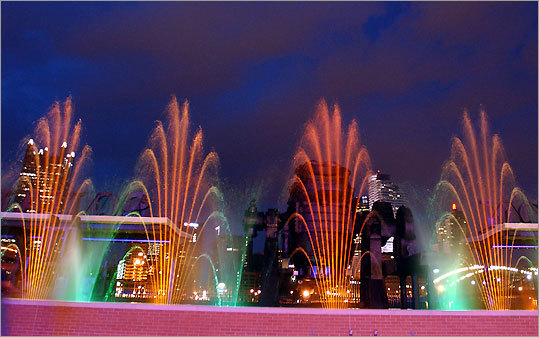 PITTSBURGH - It calls itself a "playground of historical proportions."

Pittsburgh's Station Square began its life in the late 1800s as a hub for the Pittsburgh & Lake Erie Railroad. The complex boasted an opulent passenger terminal, freight facilities, and warehouses on 52 acres at the confluence of the Monongahela, Allegheny, and Ohio rivers.

Over the decades, planes, cars, and trucks eroded the passenger rail business, and the area fell into disrepair. The Pittsburgh History and Landmarks Foundation began redevelopment in 1976, eventually leading to the transformation of the empty railroad buildings into an entertainment district of chic hotels, restaurants, and shops.

One of the featured attractions of Station Square can be found at the Bessemer courtyard and fountain. There stands a giant steel object shaped like R2-D2, a Bessemer converter that dates to 1856.

Today this relic of one of Pittsburgh's mills - where it was used to convert molten pig iron into steel - serves as the backdrop for a state-of-the-art fountain shooting jets of colored water 40 feet into the air. Daily at 20-minute intervals the fountain performs shows choreographed to the music of Frank Sinatra, Celine Dion, ABBA, the Beach Boys, and Pittsburgh's own Christina Aguilera.