The audacity of hoping just to be there

Three days before Barack Obama stands on the Capitol steps and places his hand on Lincoln's Bible, the president-elect will board a train in Philadelphia and begin a well-scripted journey via Baltimore to the center of Washington.

Many hoping to share in Obama's historic Jan. 20 inauguration - an estimated 1 million to 5 million people may attend - will not have such a comfortable journey.

With people booking hotel rooms as far away as Philadelphia (140 miles northeast of the capital) and Richmond (105 miles due south), the crowd converging for the swearing in of the 44th president is sure to bring the city to a standstill.

"The more you can prepare to be on your feet all day, dressed warmly, and be prepared to fend for yourself, the better," said Rebecca Pawlowski, communications director for Destination DC, the city's tourism office.

The inauguration is the center of a days-long celebration of unprecedented proportions: Obama and Vice President-elect Joe Biden will host an afternoon welcoming event on the steps of the Lincoln Memorial on Jan. 18; volunteers will take part in a day of community service throughout the region Jan. 19; and formal balls and casual parties begin Friday, Jan. 16, and continue through Inauguration Night on Tuesday.

With two weeks to go, thousands of people are at work on everything from the parade route to portable toilet placement. Strict security measures prohibit ticketed guests from bringing coolers, backpacks, strollers, umbrellas, and many other items into the restricted areas near the Capitol and the parade viewing stands. Those gathered on the National Mall will be able to carry more, though officials have yet to detail prohibited items. The city is issuing 500 additional vendor licenses, in hopes street food will be plentiful. Yet no one can know exactly how smoothly things will go for what is expected to be the largest gathering in Washington's history.

And then there's the weather, which can often be rainy or snowy, with an average temperature for Jan. 20 of 37 degrees.

Yet Obama's campaign of hope and change has inspired many who wouldn't miss the chance to see the nation's first African-American president sworn into office. Burns, who has stayed at home in the suburbs during past inaugurations, is eager to forge into the fray this time.

"When Dr. King gave his speech, I was outside playing football, and I've always regretted that," Burns said. "For this inauguration, I said I want to be down there."

For those coming from farther afield, just finding a place to sleep has become a historic undertaking. Many D.C. hotels were booked within days of Obama's election, and some hotels more than two hours from the city are charging $699 a night, with a five-night minimum. That's right: $3,495 plus tax for a basic hotel room you will spend little time in. The Ritz-Carlton in McLean, Va., 10 miles from the Mall, is offering a Presidential Package with VIP perks for $75,000.

Scalpers have been auctioning hotel reservations on and craigslist, and last week homeowners were still listing everything from a historic one-bedroom log cabin 60 miles south of Washington to a two-bedroom town house only eight blocks from the White House. The town house goes for $2,000 for four nights, the cabin $5,000 for seven nights.

The point, though, is to be in position near the Capitol by 11:30 a.m. Tuesday, when the United States Marine Band will sound the start of the official swearing-in ceremony.

Organizers are urging people to take public transportation. Single-day Metro passes are available for advance purchase, and trains will begin running at 4 a.m. that morning. A late-December dispatch from the Congressional Inaugural Committee painted a picture of the process: "D.C.'s subway system will be running 'rush-hour' service all day, but is expecting 'crush-level' crowds. Be prepared to wait for space on a train for long periods of time, during which you will have to stand in close proximity to several thousand people."

The US Department of Homeland Security is coordinating security plans with the Metropolitan Police Department, US Capitol Police, the United States Park Police, and other federal and local agencies. Washington officials are offering an emergency notification service by means of text message, if needed during the events. For information, visit inauguration.dc.gov/emergency.asp.

Destination DC officials are hoping visitors will be able to move around enough to take in special inauguration events and everyday sights. Washington.org, Destination DC's website, lists dozens of balls hosted by state and special interest groups that are open to the public for a price. Information about the 10 official balls, to which public access is often difficult, is expected to be available soon at pic2009.org. Those interested in taking part in Monday's day of service can find volunteer opportunities - including at local schools, Habitat for Humanity projects, and youth organizations - at app.cncs.dc.gov/mlkday/viewprojects.asp.

Washington.org also details special inauguration cocktails served around the city, and has compiled a list of "44 Free and Affordable Inauguration Experiences," including the "Civil War to Civil Rights" heritage trail, a $3.60 chili dog at Ben's Chili Bowl, or simply standing on the Lincoln Memorial steps, site of the Rev. Martin Luther King Jr.'s "I Have a Dream" speech.

If the idea of such crowds can seem daunting, it helps to remember why so many want to join in.

"I think just seeing the look on people's faces. Everyone who is going to be there is someone who gave to this, whether with a $5 donation, or helping to get out the vote," said Melissa Roberts, a Boston College senior and vice president of BC's college Democratic group, which is organizing a bus to Washington for the inauguration.

During the campaign, the BC students filled a bus with 80 volunteers to support Obama in New Hampshire.

"So of course all these people want their spot on the bus to DC," Roberts said. "We're probably going to miss a few classes, but we didn't let that stop us during the primary." 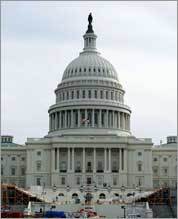 (Alex Wong/Getty Images) With just over two weeks until Jan. 20 inauguration, planners are girding for the largest gathering in the history of the capital.

Information websites for those attending the inaugural:

pic2009.org
Site of the Presidential Inauguration Committee, updating information as the events approach.

inauguration.dc.gov/index.asp
The District of Columbia's inauguration website, which will have updates on road closures and travel information up to the events.

washington.org/visiting/experience-dc/presidential inauguration/information
A rich resource provided by Destination DC with updated information on everything from inaugural balls to themed meals at area restaurants.

secretservice.gov/presidential_inaugural.shtml
Security information from the US Secret Service.