In Lucca, Tuscany without the crowds 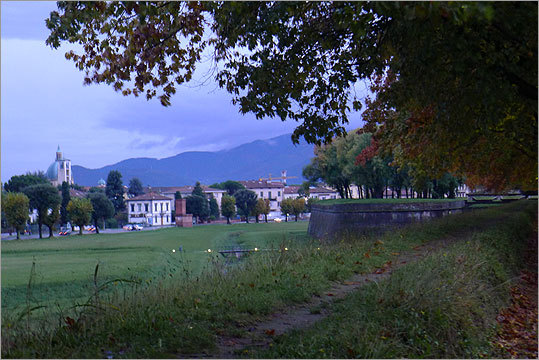 LUCCA — When it feels like the popular Tuscan destinations are more crowded with English speakers than Italian, it’s time to head to Lucca. Nestled in the foothills of the Apennines, only a short detour from the tourist magnets of Pisa and Florence, Lucca is an authentic, immersive Tuscan experience.

The historic center of the city is surrounded by the original, intact, Renaissance-era defensive walls. Enter from Porta Santa Maria, the northern gate to the old city, and you arrive in a bustling piazza with cafes and a few bike shops. If you want wheels, it is best to rent a bike. It is almost impossible to get around by car within the walls, as car traffic is prohibited on most streets for all but residents.

A former two-lane road atop the walls has been converted into a bike path and promenade, accessible by steps or ramps at several points. This perch is a great way to survey the old city and its tile roofs, medieval churches and towers, and Roman-era amphitheater before you explore at street level. As you walk along, peek into the villas and courtyards below. One of the loveliest is Palazzo Pfanner, which was built for a family of silk merchants. The lush, formal gardens have been the setting of several films, including Jane Campion’s “Portrait of a Lady.’’ The grounds and residence are open for tours from April through October.

Some of the sights are better viewed from this height. The oaks that grow on top of Torre Guinigi are a symbol of Lucca, but they are almost impossible to see from the narrow, twisting streets of the city. Of course, the tower itself is an excellent vantage point for taking in the city and surrounding countryside.

Several bulwarks jut out around the periphery of the walls. The grassy fields were once defensive positions, and you can still stumble upon chimneys from the stables and storage rooms that were housed within the walls.

At the San Colombano bulwark, close to the train station, take a break from exploring. Caffetteria San Colombano is open all day, for a coffee and pastry or a glass of wine. This open, modern space with glass walls allows great people-watching, both of the passersby on the promenade outside, and of the distinguished older men who meet here for an afternoon card game.

Lucca is a very walkable city, in part because of the absence of cars. Most destinations can be reached either by taking the path atop the walls, or by strolling down Via Fillungo, the main shopping avenue that winds through the length of the old town.

Via Fillungo is a haven for anyone hoping to find deals while visiting Italy. Silks, leather goods, and jewelry can all be acquired here at great prices. Cross the Piazza Santa Maria and start down Fillungo, and you will soon find yourself at Conforti and Mazzanti. As the owner of this small accessories shop points out the seven folds of fabric in a hand-stitched silk tie, he’ll remind you of Lucca’s history as a center of the Italian silk trade. Across the street at Lenci, timeless, supple Italian-made leather shoes are available for a steal.

Pause at Piazza San Frediano to admire the gold mosaic façade of the Basilica di San Frediano. Farther down the street, boutiques with more familiar names are tucked in among gelaterias and cafes. Bakeries feature a traditional cake called bucellato della Nonna, a raisin-studded, sweet yeast bread that every grandmother knows how to make. Locals amble or pedal down Via Fillungo throughout the day, stopping to chat with friends, picking up provisions for dinner.

Giacomo Puccini, Lucca’s most famous native son, was born and raised in a house in Corte San Lorenzo. Although the house is no longer open to the public, opera lovers still come to take a photo with the statue of the composer that marks the location. (The nearby Hotel Puccini, while quaint and affordable, has no musical association.) Later in his life, Puccini moved to the nearby seaside town of Torre del Lago, where an annual summer festival celebrates his legacy.

Just behind the ancient Roman amphitheater ringed with shops and hanging laundry, Vineria I Santi is tucked into a small courtyard. This wine bar offers a changing menu of small plates and local specialties such as pappa al pomodoro, a thick stew made with day-old bread and fresh tomatoes. If you want more formal dining, both Ristorante Giglio and La Buca di Sant’Antonio offer full menus of local specialties. Among the most special are tortelli lucchese, stuffed packets of a rich, eggy pasta in a hearty meat ragu, and farro soup, the signature dish of every kitchen in Lucca. Farro is a spelt-like grain, and here it is served in a bean and vegetable puree. It is hearty, rib-sticking stuff, peasant fare elevated to art, and you will want bowl after bowlful, with plenty of peppery local olive oil drizzled on top.

That olive oil probably came from La Garfagnana, the rolling hills of farmland north of the city. If you feel like venturing beyond the walls, drive north through the valley of the Serchio River. The hills that rise on either side of the river are covered in olive trees and grape vines, interrupted by the occasional small town. Visit in the late autumn, and the olive trees are draped with nets to catch the first, sweetest fruits as they ripen and fall.

About a half hour north of Lucca, just outside of the spa town of Bagni di Lucca, the Ponte della Maddalena spans the Serchio. This bridge is more commonly known by its nickname, Ponte del Diavolo, or Devil’s Bridge. According to local legend, the high central arch of the stone bridge kept collapsing, and the builder was at a loss. The devil offered to complete the work, in exchange for the soul of the first to cross. But as soon as the final stone of the bridge was in place, the builder sent a stray dog across, tricking the devil. Now sweethearts traditionally climb to the top of the arch, to steal a kiss instead of a soul.

Joan Charlotte Matelli can be reached at joanmatelli@gmail.com.