Sledding in the Alps is an adult thrill 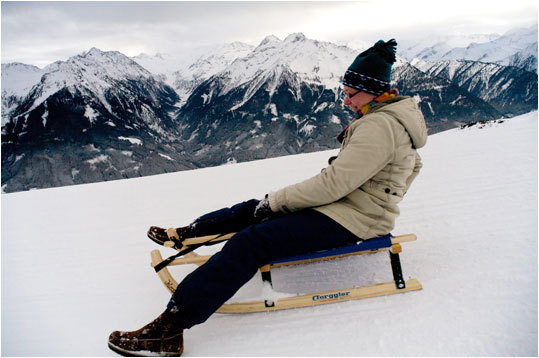 BAD TÖLZ, Germany - Where I’m from in New England, the biggest sled run in town is called Suicide Hill. Steep, and a couple of hundred feet long, this locally infamous slope doles out a handful of twisted ankles and bruised egos each year. That’s why I was shocked when Steffi, my Bavarian girlfriend, upon seeing it for the first time, chuckled and said, “Oh, that’s how we used to sled when we were babies.’’

She then described a fantastical vision of the Alps, where serpentine mountain roads are converted to hourlong sledding runs - called “rodelbahn’’ - and mid-mountain pubs supply fresh beer to thirsty Europeans. A rodelbahn, it seemed, was to my neighborhood hill what the Autobahn is to a parking lot. By the time Steffi mentioned the possibility of us spending the holidays with her family in Germany, I was already looking for tickets.

We arrived in Munich to fresh snow, and a few days later set out with some of her friends and relatives for the Blomberg rodelbahn near the town of Bad Tölz. Still jetlagged, I dozed in the backseat of the car until Steffi jabbed me with her elbow.

“See that?’’ she said, as we pulled into a parking lot. Outside was a statue of a colossal sled propped up vertically. Behind it was a chairlift, the bottom of a ski run, and a picturesque mountain covered in snow-laden trees.

Steffi arranged the details. I waited near the chairlift while she got us lift tickets and 3-foot-long wooden runner sleds, descend ants of the type Bavarians used in earlier times to move lumber and hay down snowy slopes. These have a thin protective strip of plastic or metal on the runners’ edges.

As an avid skier, the routine felt normal: Drive to a mountain, buy a lift ticket, and ride up in a chairlift in a sort of meditative calm. But as we rose between thick stands of fairy-tale pine trees, the reality of what I was doing snapped into focus: I was on a chairlift with a sled. We were a long way up. Was I really going to slide back down?

“Is this where we get off?’’ I asked Steffi as we approached the lift’s middle station. “Nope,’’ she said with a smile.

So up we went, to the top of the mountain, where the sunlit trees glowed white and yellow against a blue sky. A fresh powder sparkled like broken glass, and squeaked underfoot. In the distance, I could see a mostly flat landscape dotted with farms.

I watched a few people glide down the 15-foot-wide path before I sat on my sled and pushed off. Everything was fine as I zoomed through the first steep section of the path. Then it turned left, and in spite of everything I tried, I continued going straight - right into a snowbank. Steffi’s brother was waiting nearby with advice.

“It’s best to sit near the back of the sled,’’ he said, showing me how to brace, lean, and use my feet to steer. Eager to put the tips to use, I promptly entered a sharp turn, spun the sled 90 degrees, and performed my best impression of a human snowball.

By the second run, I could keep pace with daredevil parents zipping down with young children in their laps. That didn’t mean the 3.4-mile rodelbahn was hazardless. At an especially sharp right turn I looked back to see three young German men, hooting and hollering one after the other as each careened off the path into the woods.

As the run ended, Steffi noticed my constant grin. “Now you know,’’ she said, smugly.

Over the subsequent week I couldn’t stop thinking about our next outing, to Urlaubs-Arena Wildkogel, an Austrian ski resort with one of the longest sled runs in the world. At 8.7 miles, this epic rodelbahn goes from the top of a mountain in one town, Neukirchen, to the bottom of a mountain in another, Bramberg. The run can take up to an hour to sled down without stops and sometimes stays open late.

The night before our trip to Wildkogel, I had a hard time falling asleep. It was mostly out of childlike anticipation, but I also admit to pondering what Ulrich Schwarz, a friend of Steffi’s, told us over dinner: “Rodeln [sledding] can be dangerous if you go too fast.’’ As with skiing, the occasional local newspaper report of a serious injury is a reminder that sledding is not without risks.

We ascended the 4,200-foot vertical in a gondola, a nice change from the frigid ride at Blomberg. The views of the quickly shrinking valley below and the jagged mountains across the way were beautiful.

The top of the mountain was snow-covered and dotted with skiers. It was a short walk over a nearby ridge to the start of the rodelbahn. I watched a family with two small children, all on their own sleds, dip over the lip of the run. Despite being a little sore from Blomberg, I thought, if they can do it, so can I.

Well above the tree line, the first part of the Wildkogel skimmed along a relatively wide, gently curving path cut high into the valley wall. Without many aggressive cutbacks, we moved laterally from one mountainside to the next, working our way from Neukirchen to Bramberg.

Twenty minutes later, and about halfway down, we came to a circular wooden structure on the left side of the trail. It was a restaurant and pub called Zwischnzeit (“The Time Between’’). There was a wooden fence with cables to park and lock the sleds and an open deck with tables offering sweeping views.

As we sat outside with a plate of sausages and mugs of beer, Steffi’s father joked, “Ah, a traditional Bavarian meal.’’ Moving indoors to warm up, we were assaulted by what he called, with mock disdain, “traditional Austrian après-ski music.’’ It was a combination of oom-pah and techno. When I saw a remote-controlled miniature gondola moving along the edge of the ceiling and lowering shots of schnapps to the tables on a cable-suspended platform, I knew we had to leave before we got caught up in the festivities.

The second half of the rodelbahn was steeper, with more switchback turns than the top. As we flitted down the tree-lined path, I could feel my adrenaline pumping. My muscles ached as I braced, leaned, and skidded my way through the tight, occasionally icy corners.

The rodelbahn’s finale was a fast straightaway to a sweeping right turn that opened into a slope about as wide as a football field and twice as long. I bolted down as fast as I could, squinting to keep my eyes open as cold air and bursts of powdered snow rushed by.

When the sled came to a stop, my brain was still racing with excitement. The sun had started to set, and I saw behind me what looked like a giant line of Christmas tree lights tracking the rodelbahn back to the summit. I remembered that the lights would stay on until 10 p.m.

That’s when I turned to Steffi and pleaded: “We’re gonna go again, right?’’

Always call ahead and ask about snow conditions. As with skiing, consider bringing or renting a helmet. Parents should use caution when sledding with young children. Some mountains have special “family’’ runs that start midway up the lift. You find countless rodelbahn runs throughout parts of Germany, Austria, and Switzerland, but here are a few within day-trip distance from Munich:
Blomberg (www.blombergbahn.de) A 45-minute drive from Munich, the rodelbahn is 3.4 miles long, covers more than 1,600 vertical feet, and has a chairlift. The trail is narrow, at times steep, and winds through a beautiful pine forest. Lift tickets are about $21 per day, and sled rentals are about $12.
Wallberg (www.wallbergbahn.de) An hour drive, it is more than 4 miles long, covers a more than 2,700 vertical feet, and has a gondola. Lift tickets are $12.50 per ascent, and sled rentals $7.
Urlaubs Arena Wildkogel (www.urlaubsarena-wildkogel.at) A 2 1/2-hour drive, in the town of Neukirchen, Austria, the Wildkogel rodelbahn is more than 8 1/2 miles long, covers 1,300 vertical feet, and has a gondola. Wildkogel is considered a family resort, and while the ride down can take up to an hour, the path is wider and gentler than some. Lift tickets are about $10 per ascent, and sled rentals about $14-$17.