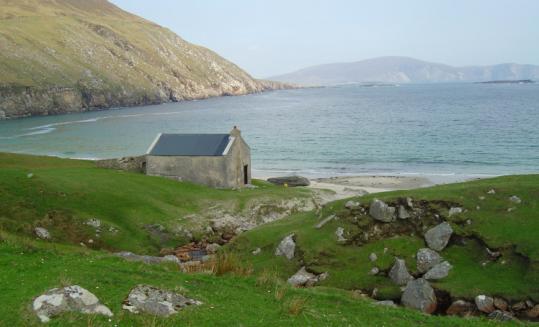 MULRANNY, Ireland - Bags checked, boarding passes in hand, and a table secured at the bar near the Aer Lingus departure gate, we raised a glass to toast our first official book group girlfriend getaway.

Sure, we had done other outings: a movie or two, a field trip to the Isabella Stewart Gardner Museum, even an annual beach house overnight. But this time we were poised to brave an international excursion, and after about a year of dithering over destinations, we made our choice. Not for us the quiet charms of Bath, England, to pay homage to Jane Austen or even Paris, to see if French women really don't get fat. We were off to Ireland in search of Grace O'Malley, the Pirate Queen.

O'Malley, known in the wilds of County Mayo as Granuaile, made a splash in the 16th century by being one of the most daunting and successful Irish pirates of her day and certainly one of the most famous female pirates in history.

With hair cropped short like a boy's, husbands and lovers aplenty, and even a face-to-face meeting with Queen Elizabeth I, O'Malley was formidable. Motivated by more than material gain - although getting and keeping property wasn't easy for a woman in those days - she was also hugely popular for her ferocious resistance to the encroaching domination of the British crown.

Partly inspired by the hoopla around the ill-fated Alain Boublil and Claude-Michel Schönberg "Pirate Queen" musical on Broadway last year and partly by Anne Chambers's book "Granuaile: Ireland's Pirate Queen," we set out to follow in O'Malley's footsteps, while leaving plenty of time for time-honored girlfriend getaway pursuits.

We made the coastal town of Mulranny in County Mayo our home base because of its proximity to O'Malley's stomping ground. Here we found a landscape of calendar-worthy beauty, sheep bearing colorful markings strolling down country roads, and bewildering signposts written only in Irish with the English translations painted over. We also found the Pirate Queen.

Our first encounter with her, or at least her name, was at the Grainne Uaile pub in nearby Newport, a tiny establishment nearly dwarfed by the sign over the door proclaiming it the Mayo Pub of the Year. (Grainne Uaile is a variation on O'Malley's name, and we found many more spellings in the coming days.)

Just big enough for a few tables, the pub offered the usual assortment of stouts and ales and a surprisingly sophisticated menu with such fare as Guinness stew, grilled salmon, and chocolate souffle. We quickly made it our favorite watering hole.

"Grace O'Malley is a local hero," said Liz McManamon, whose husband's family founded and still runs the pub. "We all love how she barged in to Queen Elizabeth and said, 'You may be the queen of England, but I'm the pirate queen of Ireland, and you can't treat us this way.' "

In fact, locals are so proud of O'Malley that at the end of July every year there is a Grainne Uaile Festival on main street, with live music, raft races, and even a spot of sheep shearing.

"The three-day festival is huge, with music in the street, pony trekking for the kids, and on Friday nights we do a seafood night with oysters, mussels, and smoked salmon for anyone who comes by," McManamon said. "Having it all along the water really adds a lovely atmosphere."

The town of Newport, which is perched on the coast of Clew Bay, doesn't only rely on its past to attract visitors. Hardy travelers can climb Croagh Patrick, although they may want to avoid the trek the last Sunday in July to avoid being inundated with pilgrims making the climb barefoot. History buffs can admire the stained glass windows at Saint Patrick's Church, which overlooks the town, or poke through Burrishule Abbey, a 15th-century Dominican abbey that over the years has lost its roof but none of its spooky charm.

In keeping with our theme, we turned our attention to Carrigahowley Castle, also known as Rockfleet Castle, one of the Pirate Queen's homes that still dot the countryside. O'Malley lived at Rockfleet for nearly 50 years until she died in 1603, and although now it's not much more than a lonely turret overlooking Clew Bay, once it was the scene of fierce fighting between her and an onslaught of British soldiers.

"You have to admire her nerve," said Avis Pinkos, a retired teacher in our group who was visiting Ireland for the first time. "It's one thing to swashbuckle with Johnny Depp, but imagine living in this stark place and taking on English soldiers alone."

Our next excursion was to Achill Island, where sheep outnumber humans and where our heroine had logged some time in Kildamhnait Castle, now an ancient tower inhabited (on the day of our visit) by a mare and her colt grazing in the front yard.

The island's spare, windswept beauty deserves at least a day of serious driving to appreciate. We stopped at The Beehive, a restaurant and shop on the Keel Village main road. Despite its unprepossessing exterior, we were welcomed inside with grilled panini, fresh salads, homemade soup, and carrot cake. We also explored the adjacent shop, whose high-end clothing, artisan crafts, jewelry, and pottery by Irish designers were light years beyond the woolen mills we had seen in more touristy areas.

Another stop for visitors paying homage to the Pirate Queen is the Granuaile Interpretive Centre in nearby Louisburgh. A small museum run by volunteers, it is devoted to all things O'Malley, including a video, paintings, and historical papers.

It seemed fitting on our last night in Ireland to trek back to the Grainne Uaile pub for a final feast. The pixie dust was on us that evening, as, halfway into dinner, a few musicians trickled in to play traditional Irish music. More followed and still more until the room was filled with far more performers than onlookers. We don't know if the Pirate Queen could sing, but we clinked glasses in her honor and sat back to enjoy the show.

Felicity Long can be reached at felicitylong@comcast.net.