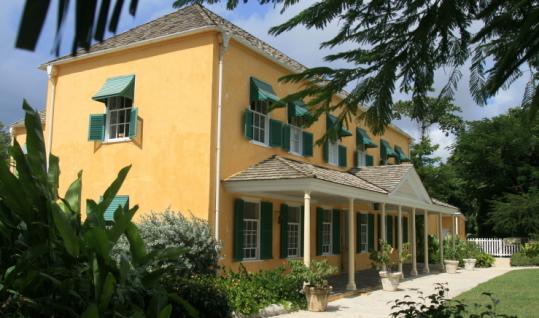 George Washington House in Bridgetown, the capital of Barbados, the only foreign place Washington visited in his life. (Patricia Borns for the Boston Globe)
Email|Print| Text size – + By Patricia Borns Globe Correspondent / February 17, 2008

BRIDGETOWN, Barbados - Every Christmas, crowds watch the historical reenactment of George Washington and his troops crossing the Delaware. The Houdon Bust at Mount Vernon re-creates Washington in 3-D based on forensic research. Now the first US president makes his on-screen debut as a buff teenager played by New York actor Adam Thompson in a docudrama of his trip to the Caribbean island of Barbados, a trip that historians say not only changed Washington but also saved his life.

The year was 1751 when a ship sailed into Bridgetown Harbor with George, 19, and his half-brother Lawrence, 33, aboard. The ship's name, Success, was propitious, for while the island's balmy climate did not improve Lawrence's health as the Washingtons had hoped - he died a year later of tuberculosis - the six-week sojourn helped George's career.

"We like to say that Washington not only slept on Barbados, he woke up here," says Penny Hyman, who directed the film as well as the restoration of the Georgian house and grounds where the brothers stayed. Located in the Garrison historic district, George Washington House represents the only foreign place Washington was ever to visit and offers new insights into his early life.

"It was a pivotal moment for him," said Jack D. Warren Jr., editor of "The Papers of George Washington" and executive director of the Society of the Cincinnati. "George had never been more than 200 miles from his birthplace, and the death of his father had consigned him to a provincial planter's life. Suddenly welcomed into the homes of Barbados's elite families, he saw possibilities for himself. His resolve to get ahead began here."

The downstairs rooms of George Washington House show the simplicity of the 18th-century residence rented by the brothers from Captain Richard Crofton for 15 pounds a month. Sunlight dapples the pine floors and tropical breezes ruffle the mosquito netting on the canopied beds, evoking an atmosphere far different from that of their Virginia home.

Upstairs, a museum recalls the historic context of Washington's visit when sugar was more valuable than gold. "The Williamsburg of George's youth might have had 12 houses and a church," Adrian Loveridge reminds guests of his hotel Peach and Quiet as he leads them through the museum.

Dr. Karl Watson, a professor at the University of the West Indies and member of the Barbados National Trust, suggests, "We mustn't get carried away by size; Barbados enriched the Treasury, pure and simple. George went from an undeveloped country to a cosmopolitan one, a step up the ladder for him. When he returned to America, influential men wanted to hear about his trip."

At the push of a button, a life-size George Washington reads from his diary. We learn that he saw his first fort, first theatrical performance, and first big city on Barbados, and that the island's beauty "ravished" him. Most important, says Warren, Washington's bout with smallpox on Barbados immunized him against the disease that ravaged his troops.

Another life-size figure introduces Olaudah Equiano, who came to the island as a slave and later bought his freedom and promoted abolition in England. The exhibit examines the island colony's system of slavery at the time of Washington's visit and the conundrum of American independence and slave ownership in his later life. (Barbados was settled by the British in 1627; slavery was abolished there in 1834. It gained complete independence in 1966.)

The existence of George Washington House on Barbados surprises US visitors who often are unaware of the historic connections between the two countries. Ron Machado, a native of Westport, Mass., relaxed beneath a tree near the concession area after a tour. "I'm moved that Barbadians have preserved a piece of my country's history," he said.

In the film, which is screened in a visitors center, we see Washington dive with wonder into the warm Caribbean and touch a sea fan. These are two of many experiences the actor had in common with Washington, never having visited a tropical island before.

"I was stepping on a foreign beach for the first time as he did and seeing the beauty that he described in his diary," Thompson says.

A unique contribution of the film is its underscoring of the importance of Lawrence Washington in George's life. The scenes with David Turner as Lawrence remind us that George Washington could not have acquired his social connections, his position in the militia, or eventually Mount Vernon without his brother and mentor.

Thompson recounts that after the film he landed a part to play God. "I told my agent, 'I've played George Washington, I've played God, I retire. It can't get any better than that.' "

Patricia Borns, a freelance writer on Amelia Island, Fla., can be reached at patriciaborns@comcast.net.