Unpretentious Vieques, an island in transition 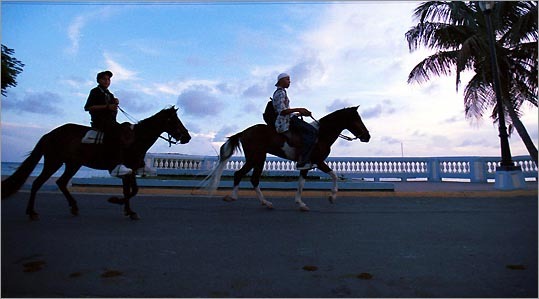 Vieques residents ride their horses down the Malecon in the village of Esperanza in Vieques, Puerto Rico. Navy bombings, Puerto Rican politics, and environmental lawsuits have brought Vieques an agitated sort of fame. But look beyond all that, and you may find a laid-back little island trying to carve out a calmer niche as a tranquil tourist destination. (AP Photo/Tomas van Houtryve)
By Brent Harold Globe Correspondent / January 7, 2007

VIEQUES, Puerto Rico -- One day last year, the island of Vieques woke up to a new graffito in giant white letters across the road running by a popular inn and restaurant: "Foreigner, Take Your $ Home."

A sign of the times in this little corner of Caribbean paradise?

Vieques is the island off the southeast corner of Puerto Rico, three-quarters of which was, until 2003, occupied by the US Navy and used for military training. It was an uneasy relationship. You still see leftover anti-Navy signs: "Marina Afuera ," Navy Out . "Ni Una Bomba Mas ," Not One More Bomb . Another painted on a big boulder translates: "The Abuses of Empire Have a Limit: The Patience of the People."

When the Navy left, it ended 60 years of bombing practice and maneuvers that kept some of the island's most spectacular beaches off limits at various times of the year. Jurisdiction of the former military preserve passed to the US Fish & Wildlife Service. Tourists and investors descended on Vieques, seeking to take advantage of the island's undiscovered charms.

Today, three years into the post-Navy era, a sign in Spanish appeals to locals: "He Who Sells His Land, Sells His Homeland With It."

The earlier message addressed to "foreigner" in three-foot-high letters has been painted over, but is still legible. Locals say the dollar sign probably does not refer to tourist money, but to the unprecedented infusion of investment money . But it makes a visitor wonder: Is this unpretentious island souring from the infusion of outside attention and outside cash?

It isn't easy reading Vieques in these days of transition. Real estate prices and tourist numbers are noticeably up, but you can still tie your hammock between two palms on a quarter mile of beach and see only two or three other people all day . There are more cars on the island, but still no traffic light. And no .

Al's Mar Azul, the down-and-dirty bar near the ferry in Isabel Segunda, continues to attract locals at happy hour with drinks cheap and strong. One of these days someone may make Al an offer he can't refuse and turn it into the upscale place the view would support. But so far, so good.

Most important, local life seems intact. Uniformed school children laugh and play on their way home. The local "paso fino" horses, ridden expertly through the streets with their unusual mincing gait, are holding their own with rental cars and scooters. Older Viequensies sitting each day on the "malecon ," the promenade along the water in Esperanza , invariably have an enthusiastic "buenos dias" for visitors.

Gringo ex-pats, local s, and more adventurous tourists mingle for drinking and dancing at La Nasa, the bar located right on the Esperanza beach. La Nasa has yet to produce a T-shirt, which is somehow comforting.

It's the great beaches here that have been getting most of the attention from outsiders. But there's a lot to this island of a very different sort. Like the meat-on-a-stick stands that spring up on weekends on the road into Esperanza. There is the great flan for sale from a housewife's kitchen. The roosters that unaccountably crow in waves all night . The horses that wander everywhere -- across the road in front of your car, in the yard of your rental . There's the fruit truck -- the best source of fresh fruits and vegetables on the island -- pulled to one side of the road, and the iguanas in the rubble pile.

Still visible are relics of the pre-Navy sugarcane era -- huge rusty cauldrons, broken-down piers, ruins of stone buildings being taken over by forest. While Esperanza caters to tourists, Isabel Segunda, the only official "town," is the business end of the island, full of atmosphere and the occasional ungentrified gem of colonial architecture. Take a break for a bargain lunch at Mar Azul, supplementing your beer with pizza or a huge, sloppy sandwich ordered and delivered from nearby Scoops or Mamasonga and eaten while you watch the pelicans dive.

There may be visitors who choose to spend their entire visit at Martineau Bay, the first and, so far, only large-scale resort and the only one with a wall around it. Outside the wall is the full-spectrum Vieques experience: sometimes noisy, funky rather than slick. Not all pretty. Full of life.

The signs and graffiti are a sign of that life, local people having their say about where their island is going. Vieques is still a real place, a home to its residents more than a tourist destination, which will make it all the more attractive to a certain sort of tourist.

Contact Brent Harold, a freelance writer in Wellfleet, at kinnacum@capecod.net.