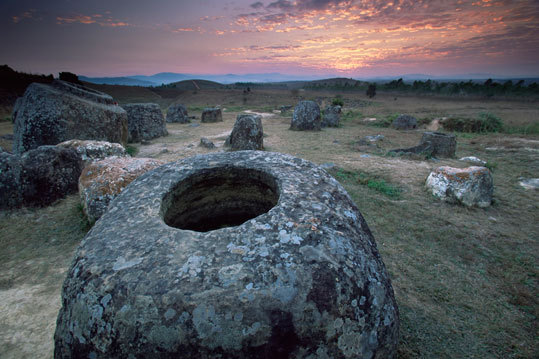 (Colin Brynn/Getty Images) Thousands of massive stone jars are hidden in the hills of Phonsavan, in northern Laos near the Vietnam border.
By Russ Juskalian Globe Correspondent / April 25, 2010

PHONSAVAN — As the small, French-built prop plane descended through the clouds over mountains that opened into a high-elevation plateau, I spotted clusters of circular-shaped depressions scattered across the ground. As the plane flew lower over terraced rice paddies and rolling hills, I saw that a few of the holes were the size of a person, others as large as a house.

I had been warned that I might spot craters when flying into this part of northern Laos near the Vietnam border, but actually seeing these decades-old remnants of some of the more than half a million “secret’’ US bombing missions during the Vietnam War was a surprise. I was here to visit the Plain of Jars, one of Southeast Asia’s most mysterious archeological sites, but what I found was more complex.

Compared with other notable places in the region, Phonsavan is unusual in that many backpackers and tourists have heard of it, but few visit here. It’s on the map because hidden among its hills are thousands of 1,500-to-2,000-year-old stone jars made by an unknown people for an unknown purpose — Southeast Asia’s equivalent of Stonehenge or Easter Island.

But Phonsavan is difficult to reach over land, and its location is removed from the primary backpacking routes. None of the archeological sites was cleared of unexploded ordnance, or UXO, until 2004. Today, only seven of the roughly 60 sites in the area are safe to visit.

Like anyone who arrives in Phonsavan by air or bus, I was greeted by a cadre of tour and guesthouse representatives vying for my attention. This meant a free ride into town as long as I was willing to listen to the driver pitch his services as a tour guide. Once I was checked into a guesthouse, I opted for two days of exploration: On the first I would see archeological sites on a standard group tour, the next day I would rent a motorbike and head out on my own.

The group tour started the next morning at 9 when a small van showed up at my guesthouse. The driver and tour guide introduced themselves, as did the other tourists. Before visiting the first jar site, we stopped by a visitors center, decorated like most buildings in the area with disarmed bombs, land mines, and other rusted-out munitions dug up from the countryside. The front courtyard was lined with chest-high bomb casings.

As we walked single file into the first site, we saw red and white stone markers on the ground with “MAG’’ etched onto them. They had been placed by the Mines Advisory Group to show where the path was free of UXO. The short walk from the parking lot took us partway up a grassy hill. When we turned a corner, scores of large stone jars came into view. A few muffled gasps came from the group, and I felt my jaw go slack.

In the bright morning light, the crystal elements in the conglomerate stone sparkled, and the green and purple lichen on the rough sides of the jars appeared to glow. Among the jars were six 30-foot-diameter craters and an old trench warfare line. The combination of things made the experience overwhelming: the sheer size (up to 10 feet tall) and number of jars (250 at this site alone), the juxtaposition of the human ability to wage war and an ancient people’s drive to create, and the mystifying nature of artifacts in general.

Without knowing who made the jars, it is impossible to determine what they were used for. My favorite theory, and the least plausible, is the one put forward by some of the Lao people who live nearby: The jars were used by a giant king to brew lao lao, a clear, rice-based moonshine. An early theory, offered by Madeleine Colani, a French archeologist and the first Westerner to document the jars, was that they were ancient funerary urns.

Later we stopped at a “whiskey village’’ where we tried the local lao lao, and at a nondescript hillside where the remains of a Russian tank are still lodged against a tree. Two other jar sites, which we visited in the afternoon, sit atop small hills under stands of trees and are accessible by walking across rice paddies.

The next morning, after managing to get the motorbike started, I set out on a mountain road. The sun had yet to rise, and the thick fog lowered visibility to around 20 feet. About 16 miles out of Phonsavan, I stopped at a massive Hmong market, the lone Westerner among hundreds of people selling handicrafts, food, and beautiful Hmong clothing.

Back on the bike, I followed the road up above the cloud line, then descended into a narrow valley. When the sun suddenly cut through the cloud cover, I was awestruck by the beauty of what I saw: 6-foot-tall bushes covered in yellow flowers that ran past rice paddies and up the face of knife-sharp mountains still shrouded in fog. Shooting up through the rice plants were tiny lavender flowers, and carpeting the ground were sensitive mimosa plants whose leaves closed when they were touched.

Returning to town, I took a short detour down a bumpy dirt road to Baan Khai, or Crater Village. There were no signs marking the way, and I was just about ready to turn around when I spotted a gently sloping pasture of bone-dry earth covered in short tufts of bleached yellow grass.

A single set of tire tracks led through the pasture that was dotted on either side by massive craters, some up to 50 feet wide. I parked the bike near one, snapped a few photos, and scanned the horizon, fearful of wandering around without knowing whether the area had been cleared of UXO (it hadn’t, someone at the MAG office told me that evening). About half a mile over the next ridge was a small village of traditional houses on stilts, and in the distance, mountains on all sides. The only sound was made by the dried grass beating in the wind against the hard, clay-like ground.

Alone, I thought about the jars. It struck me that no matter the intention of their makers, the jars had taken on a vital purpose. After thousands of years of weathering and decades of being made inaccessible by unexploded cluster bombs, the jars are helping to rebuild the area. The influx of tourism money is aiding local development and paying for MAG to clear fertile agricultural land.

The jars may also bring a lesson of hope to those who come to see them: hope that our innate drive to create endures far beyond the tragedies of history.

Getting there
Phonsavan isn’t very far from Vientiane, the capital of Laos, but the roads are so bad that bus trips take up to 10 hours. It’s easier to take a 30-minute flight from Vientiane to Phonsavan (Xieng Khuoang) on Lao Airlines (www.laoairlines .com). There are only a few flights per week.
Where to stay
There are a few options in town ranging from $3-$15 per night, and most are within easy walking distance of one another on the main road. Look at a few places and negotiate on the price.
Nice Guesthouse
Centrally located, with clean rooms and a large public veranda.
Phu Vieng Kham Resort & Restaurant
At $50 per night, the most expensive place in town, but the location of its private, luxury bungalows on the very top of a small, nearby mountain, providing incredible views, may be worth it.
What to do
Basic group tours to see the jar sites, $15-$25 per person; private tours $20-$100 per person. A one-day motorbike rental about $10.