Where elephants (infants or in rehab) get under your skin 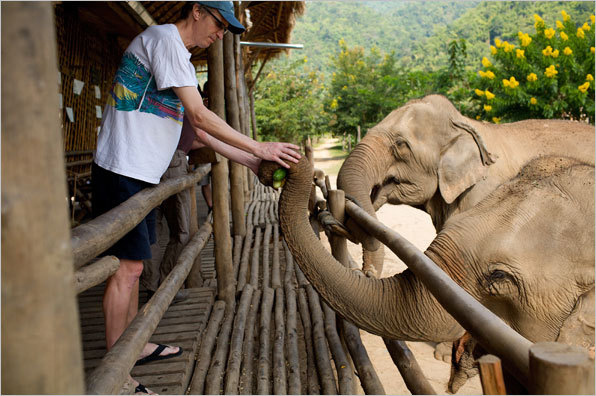 CHIANG MAI — “When you’re in the field with the elephants, keep an eye on the babies. They are very, very naughty.’’

Naughty, I thought? How can an elephant be naughty? “You’ll see,’’ said Jack Chaikarn, our guide.

He knew his advice would go unheeded because baby pachyderms are particularly endearing: They’re absurdly small next to their mothers, they flop around and play in the dirt like puppies, and it seems all their babyish curiosity is directed into a constantly searching, miniature trunk.

Hence, when 4-month-old Chang Yim ambled over to me, the last thing on my mind was safety. I must have stopped scratching his head when I turned to Chaikarn because Chang Yim let out a high-pitched squeal and I felt a solid jolt to my leg. I was lifted a few inches off the ground by the 400-pound infant throwing a head-butt to get my attention. “I told you,’’ said a chuckling Chaikarn once I regained my footing. “Naughty.’’

The Elephant Nature Park, covering roughly 50 acres in the tropical Mae Taeng valley, about an hour’s drive from Chiang Mai in northern Thailand, is one of the few places in the world where a scene like this could take place. Unlike the countless elephant camps scattered across Southeast Asia, this park is a sanctuary where formerly abused elephants live in a paradise of open space, pampering, and love.

The park is run by its founder, Sangduen Chailert, known by her Thai nickname, Lek (meaning “small’’ or “little’’). You won’t find elephant riding, elephant painting, or elephants performing circus tricks here. Nor will you see the “mahouts,’’ or elephant trainers, wielding sharp sticks or the ubiquitous “ankus,’’ a metal “bullhook’’ used to control working elephants in Asia. In a reversal of sorts, the people here work for the elephants, providing the money and labor needed to keep the nonprofit park operating.

I had signed up for a two-day, one-night Elephant Helper Overnight visit, though the park offers everything from day trips to multi-week, “volunteer’’ positions (which one pays to do) and multi-month internships.

As the minivan that picked me and the other visitors up at our various hotels in Chiang Mai pulled into the park on the first day, a beautiful landscape came into view: a grassy meadow, small wooden buildings on stilts, young teak trees, a shallow stream — and 34 elephants wandering throughout it all. After a short safety talk, we were led to an elevated platform to feed the elephants a lunch of bananas, pumpkins, and cucumbers.

I was surprised by how precisely an elephant would take a few cucumbers from my hand, stack them inside its curled trunk, and pop them one by one into its mouth. So graceful, I thought, until I was surrounded by a dozen elephants crunching, gurgling, and belching their way through hundreds of pounds of produce.

As we fed the elephants, the staff told us about them: Lilly, whose two previous owners kept her addicted to amphetamines so she could work double shifts; Malai Tong, whose foot was partially blown off by a land mine and with a handler was forced to beg on the streets with a life-threatening infection; and Jokia, who was blinded in both eyes by repeated slingshot assaults intended to make her work past exhaustion. Most of the elephants were purchased from abusive owners, many of whom are only too happy to sell off a so-called “garbage elephant’’ that costs more to keep than it brings in.

After lunch, Chaikarn led us down to a small river by the park’s boundary. “Bathing time,’’ he said, handing out buckets as the elephants lumbered into the water. “We need to rinse the mud off them.’’ And so we proceeded to go waist deep into the cool stream and heave buckets of water over our charges. Where we missed a spot, an elephant would drop its trunk into the water, and then spray itself clean. And when it couldn’t reach up far enough to scrub a particularly itchy patch of skin, it would roll onto its side for better access.

Later, in the early afternoon, we watched a pair of documentaries on elephants in Southeast Asia, and learned about the brutal practice of “pajaan,’’ or the “elephant crush,’’ in which baby elephants are tied up in restraints and repeatedly beaten with knives and bullhooks in order to “break their spirit.’’

Nearly every working elephant in Thailand, including those giving rides to foreign tourists, is subjected to pajaan, though they don’t all survive the brutal ordeal. That’s why in addition to providing a sanctuary, Chailert is pioneering the use of positive reinforcement, mainly tasty snacks and attention, to train elephants born at the park.

By my second day, I was regretting that I had to leave when Rachel Chen, a Singaporean volunteer, asked, “Are you going to the elephant haven tonight?’’ When she explained that it is a tract of virgin jungle where volunteers chaperone elephants for a night, I immediately inquired about extending my stay.

I wasn’t unique; a few days before, a woman from Britain had made the same transition from visitor to volunteer. There are even a handful of stories about volunteers who came for a week and still haven’t left, a few years on. I paid for three more days and packed a bag for a night in the jungle.

Getting to the haven involved a two-hour hike up the side of a nearby mountain. It would have taken half the time if the elephants leading the way hadn’t stopped every 10 minutes to chew on trailside vegetation. Near the top, under a thick tropical canopy, about a dozen of us arrived at a simple thatched hut on stilts where we would spend the evening. The elephants disappeared into the overgrowth.

As the forest grew dark, we ate a meal cooked over an open flame, and listened as Jittra Chakan, one of the park’s original employees and known as Pom, told stories. I was particularly moved by what she said about some of the park’s staff.

“Many of the mahouts come from Burma,’’ she said, speaking of their arrival in Thailand as refugees of a genocide happening over the border in Myanmar, which is under a military dictatorship. “They have seen such horrible things there. People not treated like people.

“And then when they work with the elephants,’’ she said, “they change. They open. They relearn how to trust, how to love, by being close to the animals.’’

For the rest of the week as a volunteer, feeding and bathing elephants was still on the agenda, but so was prepping their food, making sandbags for new construction, and shoveling mountains of poop (adult elephants eat 350 pounds of food per day). I also had more time to spend wandering the grounds, getting close to the animals, and chatting with the mahouts and staff. If only for a short while, it felt like joining an extended human-animal family.

“Quick, get in the truck!’’ someone shouted from the front seat of a pickup on my last day. We knew what it meant: A newly rescued elephant was scheduled to arrive from the other side of Thailand sometime that day.

A dozen people crammed in the pickup’s bed, we sped through a narrow mountain road until we reached a semi parked by the curb. A few of us climbed up the side of the truck and rode with its cargo, an emaciated, nearly blind elephant named Ratree, who was covered in fresh bullhook wounds.

As we rolled up to the park, Ratree lifted her snout and drew in an audible gasp of air. “She can smell the other elephants,’’ said Chailert, who was riding with us. “She’s very scared.’’

Then Chailert handed Ratree a banana and spoke softly, “Your life is about to change.’’

It did briefly. But then I heard that a few months later Ratree had died of her injuries.