Where they went: China 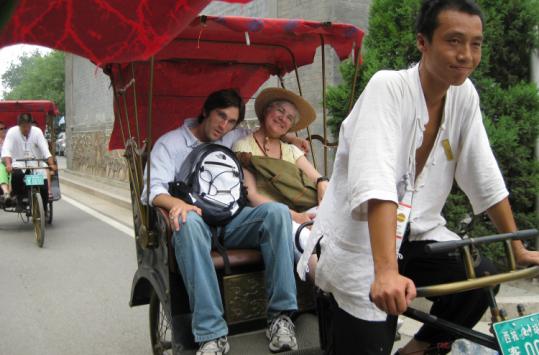 WHEN: Two weeks in July.

WHY: To view the total solar eclipse on July 22. “It was my mom’s idea,’’ Mike Foote said. “She’s a retired teacher and an astronomical phenomenon chaser.’’

FAMILY AFFAIRS: The Footes have seen other heavenly events. “As a family we saw the total solar eclipse in Mexico in 1991, and we were on a ship in the Pacific to see Halley’s Comet in 1986.’’ The Footes, from the Chicago area, frequented the Adler Planetarium there. The eclipse tour was organized by the Adler and led by China Advocates.

FELLOW TRAVELERS: On a whirlwind tour, the group visited attractions in Beijing (including the planetarium) and Xian, before the big day a week later. From their hotel in Hangzhou, the group of about 20, including a planetarium director from Australia, was bused to Anji, the best place in the country to view the eclipse. “We drove for hours up into the mountains to this big reservoir,’’ Foote said. “There were about 6,000 people, from all over the world.’’ Groups seated around their respective bus tours lined the reservoir, with leaders holding distinguishing items. “Our leader carried a yellow umbrella with a red rooster on it, and we wore Adler T-shirts.’’

THE CLOUDS PARTED: “It was cloudy out. We were all nervous, not knowing if we’d be able to see anything. But the clouds parted enough where we were. It starts off with ‘first contact,’ when you see a teeny shadow over a teeny part of sun. In ‘second contact,’ the moon starts to move over the sun and you get a 360-degree sunset. Right before the moon covers the sun, you see a diamond ring, a brilliant spot. Then there’s a wall of shadow that sweeps over you, and it’s completely dark.’’

DAY AND NIGHT: ’’When the moon is over the sun, you can see it with the naked eye, and we saw a solar flare. All the night animals start making noises, and the stars come out.’’ The total eclipse was exceptionally long, at more than five minutes.

MADE IN CHINA: At ‘third contact,’ when the moon starts to leave the sun, viewers were expecting the usual second diamond ring, but not a waterfall. “Across the reservoir was an island, and we think the Chinese released a waterfall at third contact, because no one noticed it before. That’s China - capping the eclipse with something spectacular and manmade.’’

Send suggestions within a month of your return to diane@bydianedaniel.com.