THIS STORY HAS BEEN FORMATTED FOR EASY PRINTING
World class

A semester in Cairo 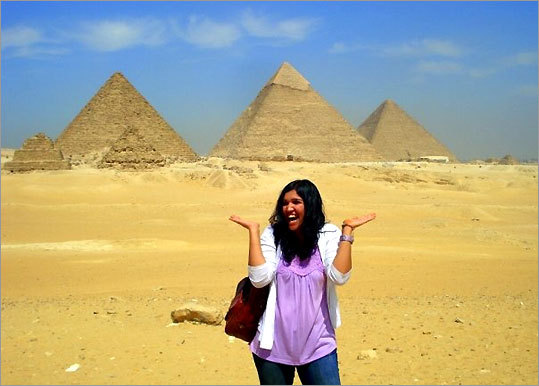 Olinda Hassan, a junior at Wellesley, is studying in Egypt this semester.
April 19, 2009

Being a woman in a socially conservative city in the Middle East can be a challenge, says Olinda Hassan, a Wellesley College junior from Tucson, who is spending this semester at The American University in Cairo. But while she has watched her etiquette carefully, other women have shaken her expectations. After dark, "many girls can be seen going to cafes with their friends - highly fashionable women wearing head scarves, smoking cigarettes with their girlfriends in a corner," Hassan says. "Hookah can also be seen everywhere, especially roadside, where small cafes will put out chairs and tables while men sit and smoke for hours, watching people pass by." Hassan, a political science major, traveled the region extensively as a child, but she says she's still got plenty to learn.

WHERE THE BOYS AREN'T: There isn't much to complain about in the student housing for Americans, where maids are on call to clean dishes, sheets, or rooms at a moment's notice. Hassan just has to make sure there aren't any men around. "The separation of gender and security is strictly enforced. Every time a male enters the girls' dorm, he is escorted by one of the female guards chanting 'Male on the floor!' the entire time."

WHERE THE BOYS ARE: "Even though it is a conservative city, dating takes place commonly. In fact I have found the boundaries to be more liberal than I had initially thought. Couples can be seen holding hands everywhere, young or old, and while physical affection is limited to none, it is widely known that dating takes place. Many will flaunt that they have multiple boyfriends or girlfriends."

TALK THE TALK: "Arabic is the primary language in Egypt. We call it 'colloquial Arabic' as it does differ slightly from the Modern Standard Arabic that students usually learn in the United States. One of the biggest challenges can be when you are haggling for a taxi or shopping in Khan Al Khali. You want them to know that you are not a tourist by speaking Arabic, and then realize you don't know how to say a certain number in Arabic. Regardless, you will get ripped off."

BIG MAC A LA MODE: "Because [the campus is in] a wealthy residential area, the streets are full of Western fast food chains: glamorized Pizza Huts, , and Hardee's, to name a few. These fast food stops are actual restaurants that do not look like a place you can just wear sweatpants to enter. I did eventually find some Egyptian family-owned stalls where I can get kebabs and falafel for a third of the price of a Big Mac."