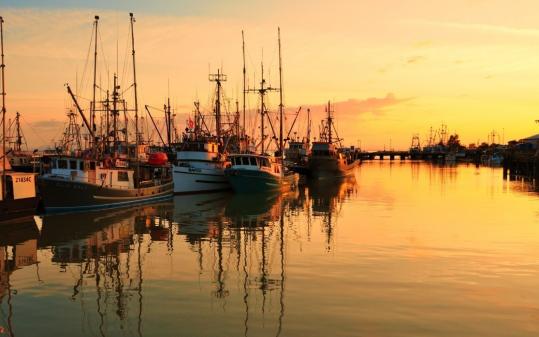 Steveston, a village in Richmond, sits on the Fraser River and is known for its seafood restaurants. In Richmond’s Aberdeen Centre, Tomiko Nishimura makes American-style Japanese pastries at Beard Papa’s. The view from Vancouver’s Queen Elizabeth Park. (Photos By Kari Bodnarchuk/For The Boston Globe)
By Kari Bodnarchuk Globe Correspondent / January 17, 2010

What to do when you’re not slopeside or ringside, cheering on the world’s best cold-weather athletes next month? We’re taking you on a mini-tour through Whistler, Richmond, and Vancouver, highlighting cool neighborhoods near each Olympic venue and offering ideas on sights to see and things to do, from gallery tours and gondola rides to 24-hour skiing and snowboarding adventures.

“Live sites are intended to make people feel as if they have one foot in the stadium,’’ says John Rae, executive producer of Whistler Live! “You could keep yourself thoroughly engaged and entertained during the Games without having a ticket to any of the sporting events.’’

Whistler
Whistler Village, located at the northern end of the famously scenic Sea to Sky Highway, will turn into a big block party with an alpine vibe come Games time. A pedestrian-only walkway, the Village Stroll, links six outdoor sites in a half-mile stretch that will serve as enter tainment hubs, featuring free live music and performances: Watch artists create giant canvases, see bands like Barenaked Ladies and Bedouin Soundclash, visit the kid-friendly zone for storytelling, and witness skiers and snowboarders leaping through rings of fire.

While Bode Miller and Lindsey Vonn tear up the slopes at Whistler Creekside, the rest of Whistler Blackcomb Ski Resort will remain open. Translation: Out of 200 named ski runs, only four will be closed to the public. That leaves you with nearly 7,400 skiable acres to traverse, and bragging rights for enjoying the only glacier skiing and snowboarding in North America. (Whistler Heli-Skiing will also transport upper-intermediate and expert skiers into the surrounding Coast Mountains for guided backcountry adventures.)

Whether you ski or not, don’t miss a ride on the new Peak 2 Peak gondola, one of the longest and highest in the world, which can whisk up to 28 people 2.73 miles over a forested valley with the glacial-fed Fitzsimmons Creek 1,400 feet below. Transit time: 11 minutes. Your gondola ticket lets you to travel back and forth all day, so you can grab a bowl of chili at Blackcomb’s Rendezvous Lodge, explore both mountains, and then get back to Whistler Village in time for the nightly victory ceremony at Whistler Medals Plaza.

Hop a free ride on one of the area’s eco-friendly hydrogen buses and visit the new Squamish Lil’wat Cultural Centre in Whistler’s Upper Village to learn about two of the four tribes co-hosting these 21st Winter Games. Built to look like a traditional Squamish longhouse, the museum has a 220-foot glass wall and forest views, and contains ceremonial blankets, authentic clothing, cedar totems, and dugout canoes. Squamish or Lil’wat guides offer tours of the building in between drumming performances and a short film that discusses modern-day First Nations’ culture and lifestyle. Sample traditional dishes in the cafe, including smoked salmon on bannock (fried bread), and peppered chicken with cedar jelly and brie.

Richmond
Just south of Vancouver, in a delta region where the Fraser River meets the Pacific Ocean, the city of Richmond reflects its roots as a vital fishing port and multicultural hub. The cannery boom of the 1800s drew thousands of Chinese and Japanese workers and helped shape Richmond, turning this sleepy community into a lively city where more than 60 percent of the residents are of Asian descent.

Necessary tools for exploring the city: a good pair of walking shoes and a TransLink ticket, which covers the light rail and local buses.

From the Richmond Oval, located in a quiet light-industrial park on the banks of the Fraser River, walk 10 minutes to downtown and catch the 401 bus to Steveston Village . In an afternoon, you can wander through the Gulf of Georgia Cannery and nearby Britannia Heritage Shipyard, both National Historic Sites that capture the importance of the local fishing industry. Then stroll along the wharves in this charming village where seafood restaurants line the docks. (It’s no surprise the city has Canada’s largest commercial fishing fleet.) Small, independent shops offer everything from First Nations artwork (try the native-owned Canoe Pass Gallery for a good selection) to kitschy souvenirs. The harborside Sockeye City Grille and Blue Canoe restaurants specialize in Pacific Northwest fare and serve excellent fish and chips.

Steveston’s mellow pace contrasts with the Golden Village , a microcosm of all things Asian in downtown Richmond, where you’ll find more than 300 Asian shops and eateries. The Aberdeen Centre, an immaculate, bustling mall, looks like it’s been transplanted here from Hong Kong (thankfully, most Chinese signs have English translations).

Richmond’s celebration site, the O Zone , will have live bands, a public skating rink, the Holland House where medals celebrations for Dutch athletes take place, and a Winter Games Dome where you can ride in a bobsled, ski through the woods, and experience other Olympic sports in a virtual realm.

Downtown Vancouver
Yaletown turns pedestrian-only during the Olympics as Mainland and Hamilton streets link two of Vancouver’s LiveCity sites. In this renovated warehouse district, hip furniture stores and chic boutiques occupy old red-brick buildings, and cafes and espresso bars spill onto loading-dock-style patios. Visit the Coastal Peoples Fine Arts Gallery for native jewelry and carvings, stop into the Yaletown Brewing Co. for a pint, grab an artfully prepared steak or salmon dish from the trendy new Society dining lounge, and then head to LiveCity Yaletown at David Lam Park for the nightly laser and water show. Or hop an Aquabus to nearby Granville Island , where you can visit the Swiss and Francophone Olympic pavilions, stroll through the public market, and poke around shops selling organic chocolate, outdoor clothing, native carvings, and “everything for dogs and cats under one woof,’’ in the funky Woofles & Meowz red caboose on Cartwright Street.

Lace up your ice skates a few blocks northwest of Yaletown in Robson Square and glide around the outdoor rink at GE Plaza. Skating is free; rentals cost $3. Next door, the Vancouver Art Gallery hosts a free exhibit of Leonardo da Vinci’s anatomical drawings, with their remarkably precise details, and the nearby Bill Reid Gallery of Northwest Coastal Art displays works by one of the province’s most renowned First Nations artists.

Take a 10-minute taxi ride from the Pacific Coliseum , located in a working-class neighborhood due east of downtown, to Commercial Drive , an eclectic neighborhood with everything from a Turkish coffee lounge, a take-out sushi joint, and an all-organic Indian eatery to old-time pizza shops and fresh produce markets, with an Italian shoe shop and the People’s Co-op Bookstore in the mix. Hop out around Venables Street and, with the mountains at your back, walk south about 15 blocks to the big SkyTrain station next to North Grandview Highway , enjoying the whimsical wall murals en route. Refuel at Stella’s Tap and Tapas Bar, which serves 60 imported Belgian beers and some of the best mussels in town.

Enjoy one of the best panoramic views of Vancouver and its mountainous backdrop from the city’s tallest hill (Little Mountain, 550 feet), located in Queen Elizabeth Park near the Vancouver Olympic Centre. Snap a few cityscapes next to the playful bronze statues, visit The Bloedel Conservatory where hundreds of exotic birds fly free under the geodesic dome, and enjoy a mountaintop meal at Seasons in the Park, which has an extensive wine bar, creative Pacific Northwest fare, and an outdoor patio with stone fireplaces and city views (President Clinton dined here with Russian President Boris Yeltsin). Then walk or catch a bus to nearby Main Street , an edgy, up-and-coming neighborhood known for its antiques and where low-end storefronts mix with trendy lounges, fair trade coffee shops, a United Nations roundup of restaurants, and boutiques and boutiques selling everything from vintage clothing to Buddha supplies. Don’t miss Burgoo, a bistro specializing in comfort food from around the world, like Irish stew, Swiss fondue, and “the best mac and cheese in the Northern Hemisphere,’’ according to one Vancouverite.

The University of British Columbia (UBC) area near Thunderbird Arena has lush parks and gardens (much stays green here year-round), picturesque drives, several of the city’s top beaches, and more elbow room and a mellower pace than downtown. Wander the trails at the UBC Botanical Garden , where you can stand under massive trees found only in the Pacific Northwest, and discover Japanese katsura trees, which have heart-shaped leaves and smell like blackberry crumble. UBC students offer hourly tours of the new Greenheart Canopy Walkway , a “tree-friendly’’ collection of elevated platforms and bridges that form a 1,010-foot loop around the forest. The newly renovated and expanded UBC Museum of Anthropology captures the splendor of First Nations art, with two-story-high totem poles and canoes.

Ask the locals where to hang out after a snowboarding or aerial event at Cypress Mountain , located in a quiet provincial park, and they will probably point you to Grouse Mountain in North Van , a ski area north of the Lions Gate Bridge that offers 24-hour skiing, snowboarding, zip-lining, and full-on entertainment throughout the Olympics, and easy access by public transportation. The city and ocean views are so stunning, NBC’s “Today’’ show will broadcast from here daily. Catch the best view from an observation deck on the world’s first elevator-accessed wind turbine, The Eye of the Wind , located near the top of the Peak Chair at 4,500 feet. A $145 after-hours ticket gets you unlimited mountain access for 17 nights between 8 p.m. and 6 a.m. Reach the mountain chalet via the Skyride , North America’s largest aerial tramway, which whisks 100 people a mile up the mountain in about 5 minutes.

Before heading back downtown, save a couple of hours to explore the Capilano Suspension Bridge and surrounding park, just 2 miles south of Grouse, where a canopy walkway and boardwalks take you through a coastal temperate rain forest and past 200-foot Douglas firs. To reach the park, you have to cross the wide and sturdy suspension bridge, which passes over a gaping canyon and the Capilano River 230 feet below.

Kari Bodnarchuk, who lives less than an hour from Vancouver, can be reached at travelwriter@karib.us.