Moseying on the Merritt Parkway 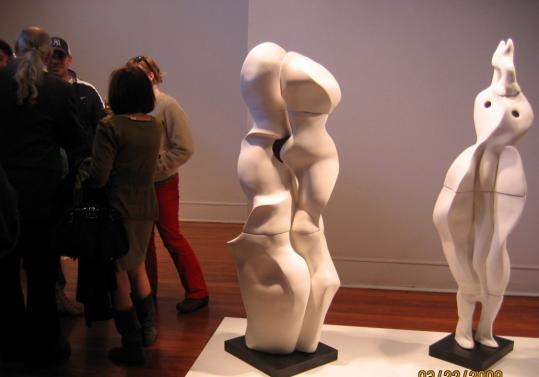 On a trip, I want to get where I’m going - unlike my husband, who is happy to drive half an hour off the highway to find a state park or restaurant.

The Merritt Parkway has always seemed like a good compromise. It runs parallel to Interstate 95 through southwestern Connecticut, making the trip from New Haven to Greenwich eminently more bearable. No trucks or billboards allowed; instead, it’s a kinder, gentler divided highway, now designated a National Scenic Byway. It was built in the 1930s, and among its biggest attractions are its dozens of concrete bridges, sculpted in styles including Art Deco, Gothic, and neoclassical.

The other big plus is that the Merritt gives you easy access to parks, restaurants, museums, town centers, wildlife sanctuaries, and other attractions. The Merritt Parkway Conservancy has a map that highlights spots worth a stop. I made a recent trip to explore some, sticking mostly to places within a mile or two of an exit.

I get off first at exit 50 in Bridgeport for the Beardsley Zoo. The place is packed with adults pushing strollers. A large Amur tiger - one of only a few hundred left of the biggest cats on earth - paces the length of the fenced compound where it lives. The zoo was recently re-accredited by the Association of Zoos and Aquariums, and participates in several conservation programs, including breeding endangered species.

At the Discovery Museum and Planetarium a mile off exit 47 the noise level is akin to a playground at recess. Kids are climbing in and out of aerospace machines. Michael Ducharme, 2, lets a paper helicopter go over a stream of air blasting from the “Hover Port,’’ watches it waft into the air and circle down, then retrieves it and starts over. His brother Matthew, 5, has built a paper rocket, loads it into a machine, pumps the mechanism, then hits a release button that blasts it across the room. Their mother, Lisa, says this is their first time at the museum. Like me, they’re out exploring. “Every Saturday we go out and find something new,’’ she says. “We’ll go to a kids’ museum, or if it’s a nice day we’ll go for a picnic in the park and feed the ducks.’’

It is a nice day, and I next take exit 35, stopping at the Bartlett Arboretum. It’s a chance to walk through woods full of red oak, black birch, and other trees, past marshes and ponds. I keep it in mind for a future foray with the dog; they’re allowed, leashed.

A few blocks away is the Stamford Museum and Nature Center, housed in the former mansion of New York department store magnate Henri Bendel. Designed to re-create a British manor house, the building has leaded glass windows, half-timbered walls, and gargoyles. The museum has a permanent collection of art, as well as temporary shows. Several nature trails include the wheelchair- and stroller-friendly Wheels in the Woods Trail, which leads to a playground.

The site also includes the 10-acre Heckscher Farm, a working farm with a maple sugar house, organic vegetable gardens, and dozens of farm animals. Alexa Ferrari, 4, troops around the grounds with a bevy of friends, stopping to pet llamas, sheep, goats, and rabbits. Her favorite? “The horse!’’

I have held out for a late lunch at the Lakeside Diner, just off exit 34. The small white frame building doesn’t prepare you for what’s inside: turquoise and pink walls, and a plate-glass back wall overlooking the ducks on Holts Ponds. Ed Pollak, who lives nearby, is paying his bill as I walk in. “I used to drive by 40 times a week without realizing what was here,’’ he says. Now that he’s retired, he’s a regular. “Terrific food, terrific staff,’’ he says.

“You can’t come here and not have a doughnut,’’ says Bill Strong, who sits at the jammed counter with his son Will. “It’s one of the few places that still make their own. It’s also a real homey, neighborhood spot.’’

Owner Jane Agostino has run the diner for over 20 years. She ships her doughnuts to customers across the country. “Most of them come by chance, just getting off the road,’’ she says. “Then you see them every year coming and going.’’

To work off lunch I head up to exit 37 and the 300-acre Waveny Park. People are flying kites, playing catch, biking, and walking through the park. I mean to walk as well. Instead, I’m sucked in by a sign for an exhibition at the Carriage Barn Arts Center on the grounds. But the door’s locked - unfortunately, the show doesn’t open for an hour. Co-curator Chris Goldbach is inside setting up, and lets me in. It’s a beautiful space, a former 19th-century stone barn with a high, beamed ceiling.

Almost immediately a quartet of men and women start banging at the door. They know they’re early, but they plead to see the show anyway. “We have friends in this exhibit, but we’ve got to get back to Silvermine because we’re in the middle of an opening there!’’ says printmaker Jane Ingram. Goldbach opens the door, and we all peruse the show.

Silvermine is the Silvermine Guild Arts Center, one of the oldest art centers in the country. I was about to head there anyway, so I follow the quartet on back roads, passing first through downtown New Canaan. Silvermine’s low-slung buildings don’t look like much, but the guild has over 350 professional artists. One of them, photographer Tom Bernsten, says, “Being involved in a community of artists has made all the difference to my art.’’ In addition to regular exhibits, Silvermine offers classes and events.

I took another route to get back onto the Merritt. And I glimpsed just enough of New Canaan’s charming red brick center to vow to check it out on my next trip down the parkway.

Kathy Shorr can be reached at kshorr@mail2.gis.net.

Information
“A Guide to the Merritt Parkway’’ available for $6 from the Merritt Park Conservancy (203-661-3255, merrittparkway.org).
Fairfield County Convention and Visitors Bureau (www.visitfairfieldcountyct.com, 203-853-7770 or 888-289-3353) puts out “Kids Play,’’ a brochure with discounts and/or free admission for many attractions.