Pilot and postmistress ply Lake Winnipesaukee in summer, their mail packet carrying tourists and treats, too 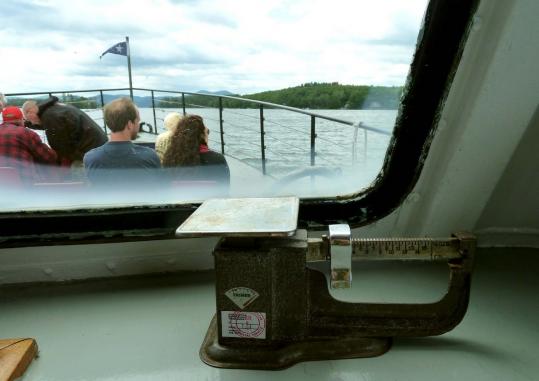 WEIRS BEACH, N.H. - As Captain Chris Day eases the M/V Sophie C. away from the dock, past the gigantic M/S Mount Washington steamboat and out onto Lake Winnipesaukee, postmistress Anne Nix has her hands full. The mail arrived late and she bustles around in the cabin sorting the letters and packages into gray canvas mail sacks, each destined for one of nine islands on the lake.

After all, people are counting on her. On the isolated islands, where many (but not all) summer folk eschew modern conveniences, mail delivery is a big deal.

“I grew up on Bear Island,’’ says Nix, 58, who works as a registered nurse and dietitian in Waterbury, Vt., in the off-season. “We would hike through the woods from the southern tip of the island to the northern tip to meet the Sophie C. When we were swimming, we knew what time it was when the Sophie C. went by.’’

Nix’s family was among the island’s original settlers, but when they arrived in 1896, the mail run was already established. Mail service on Lake Winnipesaukee began in 1892, and the Sophie C. is the only floating post office on an inland waterway in the United States. The fifth boat to serve in the lake’s postal service, the vessel was built in East Boston as a supply ship for the US Navy and was launched in August 1945. Welders later attached a B&M railroad car to the hull to create a cabin. Renamed the Sophie C., she became a tour boat on Winnipesaukee. In 1969, she took over the mail.

From mid-June to mid-September, the Sophie C. delivers mail Monday through Saturday to nine of the more than 250 islands on Lake Winnipesaukee. Although Nix has noticed a slight dip since Internet service came to some of the islands a couple of years ago, the Sophie C. delivers about 35,000 pieces of mail each season. Nix also accepts outgoing mail - some of it destined for another island on the lake. As Nix sorts express and priority envelopes into the mail bags, Day, 46, jokes that “our definition of express might be a little different from others.’’

The 76-foot-long, 80-ton vessel with a jaunty red, white, and blue paint job welcomes passengers to ride along on the two daily mail routes. The voyage attracts many return visitors each summer who enjoy the intimate, personal view of the lake, and the chance to get up close to some of the islands. Joe Columbus, a Woburn letter carrier, is aboard this day on the ultimate postman’s holiday. “Working for the post office I had to do it,’’ he says. “It’s a great way to see the lake.’’

This morning run early in the season is all about catching up. Day blasts the Sophie C.’s three-toned air horn as we approach Loon Island. “Did you have a good winter?’’ Nix asks as she hands down the mail bag to the island’s single family of inhabitants waiting at the dock. They have just arrived for the summer. “Six weeks on the island, that’s great,’’ says Nix.

A larger crowd awaits at Bear Island, where a small building that once served as a post office is now a free lending library. Nix hops ashore. She pauses to chat with the islanders and hand off dog biscuits to the summer canines that have already developed a Pavlovian response to the sound of the boat’s horn. But she has a schedule to keep. She briskly sorts the mail into rows of brightly painted mailboxes on the back of the building.

“Meeting the mail boat is the social event of the day,’’ says Richard Laronde of Walpole, who spends three months on the island. His son Carter is with him, anticipating an envelope from . Not everyone likes to be unplugged.

An even more eager crowd is waiting at Three Mile Island, home of an Appalachian Mountain Club summer camp that prohibits cellphones, PDAs, and even radios. We wonder if all the kids sunning on the dock will react like Bear Island’s dogs when they hear Day blow the horn. Sure enough, as soon as the deckhand lashes the Sophie C. to the dock, they rush aboard and storm the cooler full of ice cream treats.

Nix knows that ice cream is as important as the mail. The islands don’t have convenience stores on every street corner (or many street corners, for that matter). She keeps the cooler carefully covered with an insulated blanket so the sun doesn’t melt the top layer of Klondike bars, Hoodsie cups, and Good Humor bars. Nix collects money, chats with the kids, and hands out Wet Ones to the small fry with sticky fingers. “I hear you got engaged over the winter,’’ she says, congratulating a young woman.

Despite the rush of human minnows to the ice cream bait, plenty of cool sweet treats remain for the passengers enjoying this indolent cruise among the islands. They soak up some rays, eat ice cream, and enjoy the undulating shoreline, the distant mountains, and the glassy surface of the lake. Every so often, someone heads below deck to buy postcards and stamps, write messages, and have Nix process the mail on board with the Sophie C.’s unique cancellation.

Island vacationers wave at us from shore during the two-hour cruise to four islands (at the last one Nix simply grabs a bag hanging off a pole on the dock). Day keeps up a running commentary about the history of the lake and its inhabitants. A high school history teacher in Holderness, he spends his summers on Birch Island, where he summered when he was growing up. He still remembers the thrill of hearing the Sophie C.’s horn when he was a boy. “There are so few distractions on an island,’’ Day says. “The mail boat is a special occasion.’’

“Did you ever think you would be captain of the mail boat?’’ a passenger says.

“Oh, I think I did,’’ he admits with a sheepish grin. “Every kid wants to do it. But I’m living the dream. My little brother is so jealous.’’