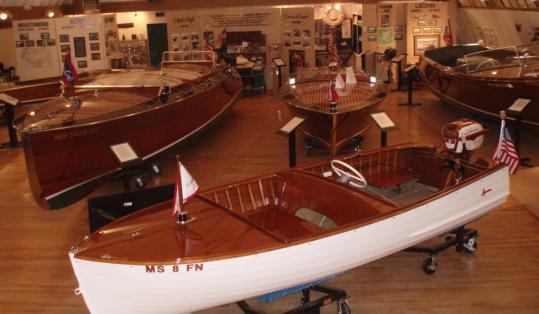 The New Hampshire Boat Museum in Wolfeboro showcases many a wooden boat that might otherwise have gone to the burn pile. (Marty Basch for The Boston Globe)
By Marty Basch Globe Correspondent / September 5, 2010

WOLFEBORO, N.H. — On a quiet July morning in 1910, Captain Frank Woodsum was steering the steamboat Armenia White into Sunapee Harbor when he blew a whistle to summon the purser.

Something had caught his eye. “Do you see what I see there on the dock?’’ he said.

It was the first Model T Ford Woodsum had seen in Sunapee.

Woodsum was right. But that era and more lives on in a collection of antique and vintage wooden boats, sailboats, kayaks, canoes, guide boats, toy boats, runabouts, and race boats inside the half-domed New Hampshire Boat Museum.

Located about two miles from downtown Wolfeboro near the shores of Lake Wentworth, the museum is loaded with vessels that provide glimpses into what life was like over the years on the state’s lakes and rivers. Here hands-on displays allow boat lovers to try tying various nautical knots, landlubber families to learn marine terms, and Lakes Region visitors to test their knowledge of Lake Winnipesaukee’s history. Lectures, boat-building programs, and events are among the offerings.

Founded in 1992, the museum was located in the boat-friendly towns of Meredith and Weirs before moving to Wolfeboro 10 years ago.

There’s a swing-era atmosphere inside the museum, which is housed in what was the Allen “A’’ Resort dance hall and theater. Visitors walk along a hardwood floor among black-and-white photographs, classic outboard motors, and powerboat race trophies as big band music plays. The former stage contains memorabilia including the replica of a 1930s boat and motor repair shop and several well-maintained canoes and kayaks.

One canoe, built in Auburndale, is from the time when gentlemen would paddle with their dates on the Charles River. Several canoe builders operated in Boston and its environs during the late 1800s and early 1900s. The graceful Courting Canoe is 18 feet long and perfect for bringing along a picnic basket. Boston police officers are said to have patrolled the river in those days to make sure activities in the vessels remained above board.

There is a romance linked to wooden boats, which need the deft hand of a skilled woodworker to restore them and keep them afloat. Wolfeboro’s George F. Johnson was such a man. One of the museum’s founding fathers, Johnson was a wooden boat dealer and restorer known for his restorative work and incredibly messy desk. He died in 2007 but his green wooden desk is on display along with the “Walk In’’ and “Gone’’ signs he hung on his door.

His dream boat,which he spent six years restoring, is next to the desk, a 27-foot Custom Chris-Craft from 1935. Initially powered by a 250-horsepower, 8-cylinder A120 motor, it cruised up to 45 miles per hour. Johnson enhanced it with original hardware, tan interior upholstery, and a Flagship Chevy motor.

“He was a colorful character,’’ says Ann Sprague, museum executive director. “He was very well known and respected within the wooden boat community.’’

When you see another boat, the sleek 1951 Sportsman Kaitlin-Anne, it’s easy to get nostalgic about the classic 1981 movie “On Golden Pond,’’ filmed on Squam Lake. A popular boat for its time that was able to cruise along at about 40 miles per hour, it sold new for between $3,250 and $3,810. The 22-foot vessel bears a strong resemblance to the same model boat, the Thayer IV, made famous in the movie, where it was run into the rocks by the irascible Norman Thayer (Henry Fonda) and Billy (Doug McKeon), the son of his daughter’s fiance.

There’s also a well-muscled workhorse, a circa 1929 Hickman Sea Sled. Once used to carry construction materials for fishing camps on a northern Maine pond, the 13-footer was scheduled for the burn pile before it was rescued, restored, and donated to the museum. Its inverted “V’’ hull was the predecessor of the famed Boston Whaler.

Hobby enthusiasts will find models of famous steamships. There’s a replica of the wooden side-wheeler Mount Washington, which went up in flames in 1939 and of the Lady of the Lake, which was sunk in 1895.

Marty Basch can be reached at www.onetankaway.com.