From Falmouth to Provincetown, fairs galore 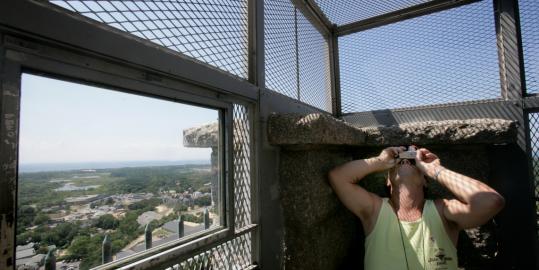 Bryan Schill takes in all the angles atop Provincetown’s Pilgrim Monument, which is celebrating its centennial on Aug. 5. At the Wellfleet Oyster Fest, join a shellfisherman on the flats to harvest and shuck your own. Scallops fried to perfection are the lure at Bourne’s annual fest. (Dominic Chavez/Globe File 2006)
By Ellen Albanese Globe Correspondent / July 4, 2010

Cape Cod loves a party. Dozens of festivals from summer into fall celebrate beaches, fishing, farming, seafood, the arts, and family fun. Here are 10 of them:

Festival of Native Art, Music, and Culture An organization that works to preserve indigenous lands, languages, and cultures around the world will present this festival July 10-11 at Peg Noonan Park in Falmouth. Artisans such as Zapotec weaver Jose Buenaventura Gonzales Gutierrez will demonstrate and sell their crafts; Yarina, a family of musicians from Ecuador, will perform their blend of traditional and fusion music; and Sly Fox’s Den will prepare Wampanoag cuisine, including fish tacos and sassafras tea. Purchases help support the projects of Cultural Survival. www.culturalsurvival.org/bazaar/falmouth

Barnstable County Fair Seventies rock icons Village People will open the 166th fair, which runs July 17-24 at the fairgrounds in East Falmouth. Entertainment includes pop rock Gin Blossoms and country music star Bucky Covington. For the first time, the fair will present Aussie Kingdom, a traveling animal education show that features kangaroos and wallabies, along with a collection of colorful Australian birds, petting zoos, and birds of prey. There are also 4-H demonstrations, horticulture displays, rides, games, arts and crafts, and food. In the arena, catch a demolition derby on Wednesday and three monster trucks in a freestyle mash on Thursday. www.barnstablecountyfair.org

Woods Hole Film Festival The 19th annual fest, July 31-Aug. 7 at several venues in the village, will screen more than 100 narrative and documentary feature films, shorts, and animation, many of them world or New England premieres. Two-time Academy Award-winning documentarian Barbara Kopple, this year’s filmmaker-in-residence, will lead a panel discussion on politics and documentary filmmaking, as well as a workshop. There will also be a panel discussion with authors whose works have been made into films, an outdoor screening powered completely by renewable energy, and master classes on acting conducted by Carolyn Pickman of CP Casting (“The Departed,’’ “Mystic River’’). www.woodsholefilmfestival.org

Pilgrim Monument The Provincetown monument celebrates its centennial on Aug. 5. President Theodore Roosevelt laid the cornerstone in 1907, and on Aug. 5, 1910, President Taft dedicated the finished 252-foot tower; that same year a museum opened at the base of the monument to educate the public about Provincetown’s role in US history. A parade down Commercial Street will be followed by a public ceremony at the monument at 1 p.m., ending with closing ceremonies and a laser light show in the evening. All summer long, the monument will show the exhibit “100 Views/100 Years’’ featuring Provincetown’s icon interpreted through art, postcards, and decorative objects. www.pilgrim-monument.org/monument.html

Cape Cod Stampede It’s bull riding, bronco riding, barrel racing, and more Western fun at the Aug. 14-15 fete at the Barnstable County Fairgrounds in East Falmouth. There will be professional rodeo performances and country music shows featuring Chad Burdick and Something With Digby. Participants can vote for the “best of the fest’’ barbecue and chili. The event, sponsored by the Boston-based Spirit of the American Cowboy Foundation, is a fund-raiser for the Jimmy Fund and Dana-Farber Cancer Institute. www.cowboyspirit.org/

CraftFest More than 100 artists, artisans, and craftsmen will offer their wares Aug. 21-22 on the Cotuit village green. The 40th annual festival draws exhibitors from all over New England and as far as Florida, with items such as decorated Ukrainian eggs, jewelry made from antique buttons, and sgraffito decorated pottery. Local painters, photographers, and sculptors will display their work. The event will include live music, craft demonstrations, workshops for children, and lectures by artisans. Some people come just for the lobster rolls and clam chowder prepared by volunteers from the Cotuit Federated Church. www.craftfestcotuit.com

Bourne Scallop Fest Some three tons of scallops will be consumed at the 41st annual festival, which runs Sept. 24-26 at Buzzards Bay Park, on the banks of the Cape Cod Canal. Fried scallop and herb-roasted chicken dinners are the big draws at the food court, which will also serve scallop chowder, lobster rolls, hamburgers and hot dogs, and beer and wine from local providers. Headlining a full schedule of live music is the Martha’s Vineyard-based band Entrain, who will perform Saturday evening. Rockwell Amusements will provide a midway of rides and games, and there will be a juried crafts show. www.bournescallopfest.com

Cape Land and Sea Harvest CLASH is a Cape-wide festival showcasing local foods and bounty from the sea. The fifth annual event, Sept. 24-26, will include a farmer’s market, educational sessions, food and wine tastings, and tours of farms, bogs, breweries, wineries, and piers across the Cape. A farm-to-table dinner will take place Sunday afternoon at Meetinghouse Farm in West Barnstable. This year ice cream shops will compete in ScoopApalooza to design the best new ice cream flavor using local ingredients, and restaurants will offer special CLASH menus all week. www.capecodclash.org

Martha’s Vineyard Food & Wine Festival The fourth annual fete, to be held Oct. 15-16 at the Boathouse Field Club in Edgartown, will feature sake sommelier Nancy Cushman and chef Tim Cushman of o ya in Boston presenting a comprehensive guide to sake and sushi. Other events include cooking classes with Andy Husbands, chef-owner of Boston’s Tremont 647; seminars on wine pairings; and wine dinners at local restaurants. A portion of festival proceeds will benefit the Martha’s Vineyard Boys & Girls Club, the local YMCA, and the Martha’s Vineyard Museum. www.mvfoodandwine.com

Wellfleet Oyster Fest Shuck and slurp at the 10th annual gathering, Oct. 16-17. The event includes shucking contests, food vendors, cooking demonstrations, speakers on fisheries and aquaculture, poetry readings, live music, a 5K road race, and a juried craft fair. The popular “Shucky’s Day,’’ in which participants join a shellfisherman on the flats, harvest and shuck their own oysters, then pair them with wines, has been expanded to two days this year, thanks to accommodating low tides. “Taste the Terroir’’ gives people the opportunity to sample oysters from different areas of Wellfleet Harbor and taste the subtle differences resulting from water depth, vegetation, and other factors. www.wellfleetoysterfest.org