Farm updated with Thoreau’s love of environment in mind 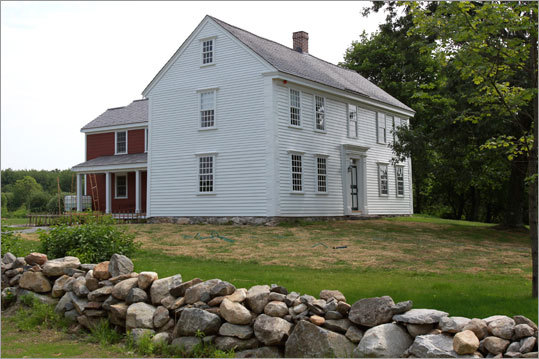 Beyond his most famous role as a “self-appointed inspector of snow-storms and rain-storms,’’ the writer Henry David Thoreau was a classic Yankee do-it-yourselfer, a genuine jack-of-all-trades. The Concord native and author of “Walden’’ was an accomplished historian, surveyor, naturalist, humorist, and engineer as well as the prototypical environmentalist and a pretty fair hand at carpentry, masonry, and small-plot farming. It’s therefore fitting that many of these skills were required to preserve his birthplace.

The newly restored farm at 341 Virginia Road opened to the public yesterday. “People can come here and bring a book, or write in their own journals,’’ said Nancy Grohol, 41, director of the nonprofit Thoreau Farm Trust. “We want visitors to be inspired.’’

Located on a twisting lane dotted with large swaths of meadow, the farmhouse where Thoreau was born on July 12, 1817, is set back from the road and shaded by a single oak tree. It’s a quiet, solitary, two-story, five-room house with a narrow entrance hall and stairway, and a modest addition out back that’s painted red to distinguish it from the white clapboards of the historic portion.

The house, built by the Wheeler family in the 1730s, will be open Saturdays and Sundays from 11 a.m. to 4 p.m. through October. Guided tours of the house, priced at $4, will be conducted at 11 a.m., otherwise admission is free. The farm will also offer children’s programming, author visits, nature walks, and other events throughout the year.

“Tourists have been coming here since the 1880s, but it’s always been in private hands,’’ said Grohol. She noted that the former residences of other local authors, including Ralph Waldo Emerson, Nathaniel Hawthorne, and Luisa May Alcott, have been turned into public spaces, but until now Thoreau’s had not. “And he was the only one born in Concord,’’ she said.

The property has been continually farmed for more than 300 years, and is located on one of the oldest streets in Concord, said Marcia Rasmussen, 55, the town’s director of planning. When the previous owner, James J. Breen Jr., died while working in his cornfield in 1995, the town secured an initial preservation grant of $160,000. Then, with the sort of bootstrap effort that would have pleased Thoreau, town selectmen and volunteers raised $960,000 via nonprofit contributions, anonymous donors, and “kids’ lemonade stands’’ to buy the property, thereby saving it from developers, Rasmussen said.

The farmhouse was added to the National Register of Historic Places in 2004. Three years later the Thoreau Farm Trust took title of the house and two of the adjoining 20 acres for $1. (The town owns the remaining 18 acres and leases them to Gaining Ground, a nonprofit that grows organic vegetables and donates them to food pantries, said Rasmussen.)

Vacant for 10 years, the farmhouse “was a disaster’’ when the project began, said Grohol. Thus far, renovations have cost $920,000 beyond the purchase price. When Thoreau built his tiny cabin at nearby Walden Pond in 1845, using mostly recycled materials, his cost was $28.12. The trust plans to raise a $1 million endowment to help maintain his birthplace.

Grohol said her advisory board, which includes former US poet laureate Robert Pinsky, decided that Concord had plenty of museums and that “we’re not filling this place with period furniture.’’

Describing Thoreau as “a hippie intellectual,’’ Pinsky, 69, said he didn’t think the irreverent and sometimes ornery writer would have been a “literal preservationist.’’ He certainly wouldn’t have wanted his former home “preserved in moral formaldehyde,’’ he said.

“Thoreau’s ideas were very forward-thinking,’’ said Grohol, adding that renovations have incorporated “a lot of green materials and technology.’’

For this task, the organization turned to historical architect Lawrence A. Sorli, 60. A gentleman farmer who grew up in nearby Carlisle, Sorli became a member of the Thoreau Society while in high school. He has worked on hundreds of historic buildings over his 40-year career including the Whistler House in Lowell and the West Concord train station.

Thoreau wrote that “if one designs to construct a dwelling-house, it behooves him to exercise a little Yankee shrewdness,’’ a sentiment that Sorli has apparently taken to heart. He said that the house had gone through a number of changes since its construction, including being moved 300 yards down the road to its present location in 1878. “We didn’t want to do false history,’’ he said, “adding characteristics [the house] had back at the old site.’’

During a recent tour of the property, Sorli noted that the house was “high style for a farm building,’’ a fine example of late-18th-century Georgian architecture, with rusticated quoins on the corner boards of the facade that resemble stone, and other unique details. Sorli pointed out the original old growth white pine of the second-floor window frames, and those of the lower windows, which were first replaced in the early 20th century but were restored to look like the originals.

The roof of the farmhouse was constructed with “Enviroshake,’’ which resembles traditional wood shakes but is made of 95 percent post-consumer recycled material. The stone walls lining the border of the property were recycled from local farms. Additionally, the house is heated with a low temperature heat pump and its new addition includes composting toilets and wheelchair ramps. Gaining Ground and the nonprofit Thoreau Society have offices at the farm.

“It’s preservation, allowing for change,’’ said Sorli, who studied early photographs of the farmhouse from the Concord Free Public Library. “We’re showing the evolution of the house.’’

On the second floor, where Thoreau’s friend Ellery Channing wrote in 1873 that Thoreau “first saw the light in the easternmost of its upper chambers,’’ Sorli called attention to one of several “view ports,’’ or “little windows into something behind,’’ that are located on the walls and ceilings, allowing visitors to see layers of material added to the house over its 280-year history.

One of Sorli’s key collaborators on the project was historical architect Bill Finch of Finch & Rose in Beverly. Finch determined the color of the room in Thoreau’s time by analyzing tiny paint chips through a high-powered microscope. Originally a brilliant blue-green, or verdigris, it was later repainted in the less intense “pea soup’’ color now covering the walls, Sorli said. The architects decided to locate view ports there, showing a swatch of the wallpaper that once dressed the chamber, as well as the hand-split wood laths and hand wrought nails in the ceiling.

“If you strip it all off, it’s gone forever,’’ Sorli said.

Jay Atkinson can be reached at jayatkinson3@yahoo.com.