THIS STORY HAS BEEN FORMATTED FOR EASY PRINTING
Detour 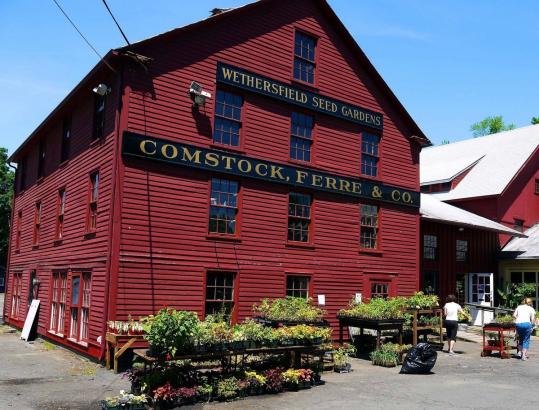 The complex of Comstock, Ferre & Co., the region’s oldest seed company, is a landmark in Wethersfield, Conn. (DAVID LYON FOR THE BOSTON GLOBE)
By Patricia Harris and David Lyon Globe Correspondent / October 16, 2011

“I love the history,’’ says Jere Gettle, who founded Missouri-based Baker Creek Heirloom Seeds in 1998. “They started selling seeds in 1811. That’s a lot of seed history.’’

The venerable company known for popularizing such vegetable standards as the Wethersfield red onion had closed its doors in August 2009. By the following June, the Gettles had reopened, and this year have partially resurrected the Comstock, Ferre seed line with about 250 packets. Augmented by another 1,250 varieties from their Baker Creek line, the store in the center of Old Wethersfield now offers one of the broadest choices of old seed varieties in the country.

Those old-fashioned seed packets, often using 19th-century art, seem to harmonize with the genuine old facility. With worn wooden floors, hickory-planked walls, oak-faced galvanized seed drawers, and tilting wooden bins designed to hold caches of beans, corn, and other large seeds, the barny structure is a direct link to the agrarian past.

“Everyone who operated this company never threw anything away,’’ Gettle says, marveling over seed scoops and a century of different scale designs. “We literally have everything we need to run an old-time seed company.’’

The Gettles are remaking Comstock, Ferre to reflect its roots. Gettle wears a loose-fitting linen shirt, cloth cap, and jersey trousers, and plans are afoot to outfit the entire Comstock, Ferre staff in 19th-century costume. One room in the spacious main structure displays arcane seedsman’s machinery, including a wooden threshing device that separates seed from the rest of a plant, and another that strips dried corn kernels off the cob. Brightly colored seed packets from the 1880s and 1890s are laid out in a glass case. “Comstock, Ferre is believed to be the first company to start adding color to its seed packages,’’ says Gettle.

Just entering his 30s, Gettle vigorously promotes heirloom growing practices. He and Emilee launched a magazine called “Heirloom Gardener,’’ and are under contract to write three books about the back-to-the-land lifestyle and cooking with heirloom vegetables. “There’s so much interest now in food,’’ Gettle says. “Everybody from every generation has decided that they want to grow food again. There are so many new gardeners - it’s a big opportunity to educate people.’’

Although many serious gardeners seek out the unusual heirloom varieties Gettle has rediscovered, he also encourages novice gardeners. “Whenever you have a hot, warm summer, like here in the Connecticut River Valley, you can grow everything,’’ he says.

Those conditions partly explain the diversity of Comstock, Ferre seeds, including the banana melon, introduced by a Massachusetts seedsman in 1885, and the small Persian melon, which Gettle traces to 1846 in the Comstock, Ferre catalogs. And contrary to the impression that New Englanders prefer bland food, Comstock, Ferre has been selling cayenne pepper seed since at least 1820.

For all its storied past, the company is building a future by encouraging new gardeners. The Wethersfield store holds inexpensive classes in gardening basics, much as some grocery stores offer cooking classes. For details, see the not-exactly-heirloom but very helpful website.

Patricia Harris and David Lyon can be reached at harris.lyon@ verizon.net.