World Cup bid puts the capital in the spotlight 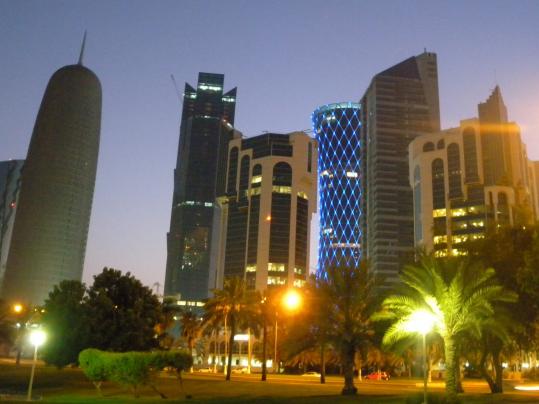 Modern buildings form the skyline of Doha, which grew out of a pearl-harvesting village. The Pearl-Qatar, a giant development project build on an artificial island in Doha Bay, is under construction. Outside the city are miles of dunes for riding. (Photos By Melanie Lidman for The Boston Globe)
By Melanie Lidman Globe Correspondent / November 21, 2010

DOHA, Qatar — Something felt odd as I browsed the stalls of brightly colored fabrics and ornate Arabic knickknacks in Souq Waqif, the most popular tourist attraction in Qatar. The walls were the expected mud brick, the roofs were a mixture of wood and bamboo. All of the vendors were wearing the traditional long white “thobes,’’ and merchandise arrived at the stalls in old-fashioned wheelbarrows. Yet something was off, almost -like, in this spotless souq, compared with the barely contained chaos of other traditional markets in the Middle East.

An old photo in the main plaza solved the mystery: This is Souq Waqif, version 2.0. In 2004, Qatar’s capital city of Doha demolished the 130-year-old market and built an exact replica in its place, cleaner, brighter, and with less soul.

Doha, too, is hurtling toward a future that is cleaner, brighter, and better packaged, both for the Western tourist and, the country hopes, a World Cup. On Dec. 2, FIFA (Fédération International de Football, Association), soccer’s ruling body, will name the hosts of the 2018 and 2022 competitions. Qatar is vying with Australia, South Korea, Japan, and the United States for the 2022 spot. The bid puts Doha in the spotlight as the city grows from a traditional pearl-harvesting village to a luxury metropolis.

Qatar sits like a small pimple on the eastern coast of Saudi Arabia, between Kuwait and the United Arab Emirates. Nomadic Bedouins first came to the peninsula in the 1850s in search of fresh water; some settled and developed pearling villages along the coast. Oil was discovered in 1940. Today, the country (an emirate) boasts the third largest natural gas reserves in the world, after Russia and Iran.

All of Qatar’s development has taken place since the first natural gas was produced in 1991. “Foreigners forget that Qatar is still a developing nation,’’ said Khalifa Saleh Haroon, creator of the country’s most popular blog and social networking site, ILoveQatar.net. “Because of all the money and all of the development, Qatar needs time to mature.’’

Doha is not exactly a well-trod tourist destination. Of the 1.2 million tourists anticipated by the end of this year, 90 percent came for business meetings or conventions. But when a friend extended the invitation to visit, I jumped at the opportunity. Now is an exciting time to visit the country. Construction happens at such a breakneck pace that postcards of the skyline quickly become outdated. Wild architectural wonders, like the Zig Zag Towers, sprout overnight, each more whimsical and complicated than the last.

A new airport is set to open in 2012, making the country a prominent travel hub for Asia. By 2015, travelers are expected to increase from today’s 14 million to an estimated 50 million per year. As Qatar Airways expands to South America and Australia, the country hopes to position itself as an ideal weekend layover.

Winter, when there are weekly camel races, is the most popular time to visit the region. During my late July visit, the heat was oppressive. Only well after sunset do Qataris emerge from their air conditioning to stroll along Al-Corniche, a 5.5-mile-long promenade that stretches the length of the horseshoe-shaped Doha Bay. The promenade connects the city’s two main tourist attractions, the Souq Waqif, located two blocks inland, and the Museum of Islamic Art Doha.

The souq is also home to a stretch of Qatar’s best restaurants, offering a culinary jaunt around the world from za’atar to meatballs. The airy museum is I.M. Pei’s most recent major work, and the sweeping lobby with its symmetry of traditional Arabic architecture exudes a calm that is lacking in other parts of the city.

Most of our time in Doha was spent eating at fabulous restaurants. Doha’s culinary scene is growing at the same pace as the buildings, attracting a broad spectrum of -starred fusion chefs to complement the traditional Middle Eastern cuisine.

When we were ready to escape the bright lights, we took a luxury SUV 15 minutes outside the city limits to the desert, where the textbook-perfect dunes are so desolate that the border with Saudi Arabia is lost in a sandy haze. If the wind blows right, the loose sand literally sings as it flies over the dunes, carving ripples along the way.

Plunging sideways down steep dunes might have been terrifying had I not been belted into a posh leather seat with air conditioning and tinny Arabic pop music exploding from the speakers. “No one else on the peninsula drives like me,’’ said our driver, Ibrahim, as we shot over the tops of dunes with no view of the drop on the other side.

After a rollicking three hours, we paused for a traditional Bedouin barbecue of succulent “machboush,’’ a slow-cooked chicken seasoned with “b’harat,’’ the gulf’s traditional citrus and spice blend. A dip in the Inland Sea, a large sea water lake with a narrow outlet to the Arabian Sea, made me feel as if I had discovered an accidental ocean.

Though five-star hotels, high-class shopping, and all the trappings of luxury tourism are readily available, Qatar still faces obstacles before it can become a big-time tourist destination. The most glaring problem is the country-wide alcohol ban. Hotel bars such as the ultra-chic Crystal Lounge in the W Hotel are the only places foreigners can enjoy after-dinner cocktails. Also, while no law exists explicitly banning tank tops and shorts, revealing clothing is strongly discouraged in public.

The World Cup bid has forced officials to look for creative solutions to accommodate visitors. Construction has started on “open areas’’: restaurants and beaches where visitors will enjoy beers and bikinis at the same time. The government claims that these sections will be built regardless of whether or not Qatar wins the bid.

“We need Qatar to be in the world spotlight so things can happen,’’ said Haroon. “It’s not just about developing infrastructure, it’s about changing the way people think.’’

The World Cup this summer in South Africa inspired many Qataris. Not only was the country’s existing infrastructure significantly improved, but world opinion of South Africa’s capabilities also changed. “We believe that the World Cup will give us a chance to present a different narrative to the rest of the world,’’ said Nasser Al Khater, the communications director of Qatar’s bid. “Seeing the Middle East will change a lot of misconceptions people have about the region.’’

Qatar straddles a line: a rapidly growing emirate with limitless money, fighting valiantly to maintain ties to its culture while vying for a place at the table of modern tourist destinations. But reaching back further than the World Cup bid, the renovated souq, or the discovery of natural gas is the Arabic enthusiasm for hosting that runs deep in Qatari blood. “Forty years ago,’’ Haroon recalled his father’s saying, “Qataris would sit outside of the old airport and wait to welcome foreigners to the country.’’

Melanie Lidman can be reached at melanie@willtravelforfood.org.

What to do
Dune Bashing With Arabian Adventures
(Pickup from your hotel)
011-974-5556-5359
www.arabianadventureqatar.net
Overnight camping in traditional Bedouin tents in winter, $120.
Museum of Islamic Art Doha
Al-Corniche Road
011-974-4422-4444
www.mia.org.qa
Save two hours to see the entire museum and the tranquil fountains jutting into Doha Bay. Free, $7 for temporary exhibit.
Villaggio Mall
Al Waab Street
011-974-4413-5444
www.villaggioqatar.com
Qatar’s chintziest mall has a canal running through it — complete with gondolas — and painted ceilings that change from dawn to sunset to starry night.
Where to stay
Hotel Souq Waqif
Souq Waqif
011-974-443-3030
www.hotelsouqwaqif.com.qa
The colorful marble murals are the most breathtaking detail in this ornate and richly decorated hotel nestled next to the bird market. In winter, $220-$425 per night.
W Hotels and Residences
Diplomatic Area, West Bay
011-974-4453-5000
www.whoteldoha.com
Best known for its Crystal Lounge, a favorite expat haunt for high-end cocktails. In winter, $330-$960 per night.
Where to eat
Isfahan Gardens
Souq Waqif
011-974-4436-0362
Rumor has it the emir copied this restaurant, which looks like an ornate explosion of tiny mirrors, from one of his favorite restaurants in Iran. No alcohol, $16-$55.
Layali
011-974-4431 0005
Salwa Road
www.layalirestaurantqatar.com
Lebanese food is ubiquitous in Doha, but this is considered the city’s top mezze, served in a tasteful venue. No alcohol, $27-$50.