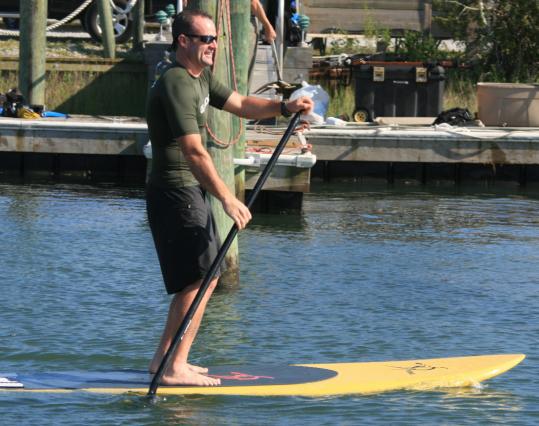 BOGUE BANKS, N.C. — “Ku Hoe he’e nalu: To stand, to paddle, to surf a wave.’’ With those words Dudley Brownlow began a stand-up paddle (SUP) class near our vacation rental on Emerald Isle beach. An instructor with Hot Wax Surf Shop, Brownlow caught the SUP wave three years ago as it hit the East Coast from its beginnings in Hawaii.

You may have seen stand-up paddlers at Chappy Beach in West Falmouth, Deveraux Beach in Marblehead, on Duxbury Bay, the Merrimack River, or York Beach in Maine. They are a sight at once strange and familiar, recalling Polynesian ancients who paddled wooden boards from island to island, fishing and surfing the reef breaks to get home. Ten years ago in Hawaii, modern-day surf king Laird Hamilton applied contemporary technologies to the old paradigm, and a new water sport was born.

Late May brings sun worshippers in droves to Bogue Banks at the southern tip of North Carolina’s 200-mile Outer Banks barrier island system. The beaches with their colorful umbrellas look like hothouses, and the water is a luscious Caribbean green. A small crowd gathered and gaped as we laid our gear on the sand. Compared with short performance boards, stand-up boards look like aircraft car riers, super wide and long for stability.

A first lesson starts where success is assured. On flat water, “You can’t not learn to SUP. My mother learned in five minutes,’’ says Clay Feeter, who publishes the glossy Standup Journal in Center Barnstead, N.H. In this case, an exception was made to hold the class on the ocean because Hot Wax owner Mike Crews was along. A type-A athlete who has been surfing Emerald Isle’s home break for 46 years, Crews, like me, was trying SUP for the first time.

Brownlow led us past the shore break to where the sea rolled gently. I found the board’s center of balance, stood, and began paddling, eyes on the horizon, balancing instinctively with what Brownlow calls “aware feet.’’ From this high vantage point a surfer can see waves forming in the distance and paddle faster to catch them than is possible by hand. (Taking the wave involves a much longer learning curve, however.) Mindy Fitzpatrick, a former National Women’s Surfing champion who lives and teaches nearby, has observed of her SUP students, “Women pick it up quicker than men. They’re better balanced.’’

Brownlow was so taken with the sport that he built a traditional “alaia,’’ or board, out of local juniper from specs provided by Honolulu’s Bishop Museum. “I’ve caught three waves with it, the most challenging surfing of my life,’’ he said. Jay Horn, owner of West Dennis outfitter Air Support, calls SUP “the new kayaking.’’ With family and friends, for fun and fitness, it is what the sport is increasingly about.

“Surfing is the wave, but SUP is the rest of the ocean — and the lakes, rivers, even riptide pools. When there are no waves, we go flatboarding,’’ said Richard Parker when I met him and his friends Rod Hoell and Patrick Dolan in Beaufort. About 20 minutes from Emerald Isle, the historic town of shiplapped white houses and whaling, fishing, and boat-building roots makes a Yankee feel at home. Facing the inner harbor, the North Carolina Maritime Museum recalls Mystic Seaport in miniature with a first-rate boat building and restoration shop. You can sail a boat, take a guided trip to the former whaling community of Shackleford Banks, or trawl for plankton samples on a research vessel.

Hoell, who took up SUP in Kauai, enjoys paddleboarding the six miles from his Beaufort dock to the west tip of Cape Lookout National Seashore to surf “the Shack’’ (short for Shackleford Banks), where the steep waves are known for embedding shells in one’s body. Luckily, he, Parker, and Dolan were taking a laid-back turn around the harbor and they invited me along.

Like a family on a Sunday stroll, four of us glided in loose formation, talking, detouring to see the wild horses grazing on Carrot Island, pointing excitedly at giant rays visible on the sea floor. The cloudless day had brought every kind of craft to the water, from kayaks to Captain Bob Rust’s Water Bug tour. In their midst we were an unusual sight, given a wide berth by passing power boaters. Yet we could pull up like any yacht to a dockside bar — and turn and be pushed downwind, planing over the water’s ripples.

Cape Hatteras may have the East Coast’s best waves, but “New England has hundreds of miles of coastal waterways that are perfect for SUP,’’ says Feeter.

Peter Panagiotis, known as Peter Pan in Rhode Island surfing circles, goes further: “I think it’s the best location in the US because of the amount and variation of coastlines.’’ A kickbox and karate instructor as well as 365-day-a-year surfer, Panagiotis paddles from Narragansett to Waterplace Park in downtown Providence for exercise and gives SUP classes on the Narrow River. “It runs for miles and miles up Narragansett Bay and is beautiful for SUP,’’ he says.

This summer, I look forward to paddleboarding on the Westport and Sakonnet rivers with the Ladds of Osprey Sea Kayak Adventures. In Buzzards Bay, Sailworld’s Jim Ballantyne equips beginners with rental boards and enough pointers for many to stand and paddle without a lesson on Buttermilk or Onset Bay. Likewise in Newport, the Boardroom staff gives beginners a rental board and a little coaching for a great day on the calm waters of Third Beach and Kings Park. Eric Gufstafson teaches SUP on Wellfleet’s estuaries and ponds. In the city, Charles River Canoe and Kayak rents gear at its Newton, Allston-Brighton, and Natick locations, and gives lessons on Lake Cochituate and the Charles. One of its instructors, Jim Blakeney, also teaches SUP at the UMass Lowell Boathouse on the Merrimack River. And Mark Anastas, considered New England’s earliest adopter, has added SUP to the lessons and gear at Liquid Dreams in Ogunquit and York, Maine.

Bob Babcock has a special take on the health benefits of stand-up paddling. With zero surfing experience, the 52-year-old Carver resident learned SUP in Plymouth Harbor after the removal of a brain tumor compromised his coordination and balance. The gift of a stand-up board from his brother changed his life. “The doctors said my conditioning from SUP helped me recover quickly from the second surgery. It’s such a cool workout. All your muscles are firing: arms, chest, abs, feet,’’ he said. With Mike Brown of Manchester, Babcock went on to found the 30-mile stand-up paddle race from Plymouth to Provincetown, the Cape Cod Bay Challenge, held this year on Aug. 14. The race benefits Christopher’s Haven, a resource for children undergoing cancer treatment at Massachusetts General Hospital.

Every beach has a place where young surfers with attitude compete for the best waves. On Emerald Isle, it’s the pier; for etiquette and safety. Brownlow kept our class well away. “Stay out of the lineup,’’ he advised. “To a prone surfer, your stand-up board bearing down from the outside looks like a freight train. If you have to pass through, paddle on your knees. There’s a subconscious superiority effect when you’re standing up.’’

For me, that won’t be a problem. The world is awash in waves; many too distant for shortboarders to paddle to; many more, too small or sloppy for them to care. On a SUP board, even a boat wake is a fun wave. Since paddleboarding on Bogue Banks, water has never looked the same.