With help from the Web, travel agents regain relevance 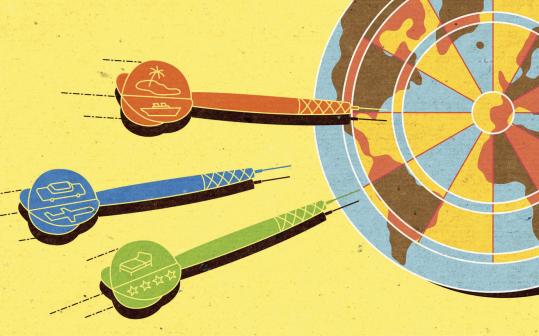 Not long ago, the advent of online travel - allowing travelers to research and book their trips with a few clicks of a mouse - was thought to be a death knell for traditional travel agents. But faced with the increasing cost and unpredictability of travel today, vacationers seem to be returning to the fold.

Twenty-three percent of online leisure travelers in the United States say they would use a good offline agent if they could find one, according to . And spotting an opportunity, a handful of new websites with catchy names like Zicasso and Tripology have emerged in the last year, offering to act as free matchmaking services for vacationers in search of traditional agents.

On the sites, travelers fill out forms describing the type of trip they're interested in (say, scuba diving in the Caribbean or a culinary vacation in Tuscany). The sites send those requests to agents who specialize in that region or type of trip. Travelers then receive e-mail alerts with up to three itinerary proposals from competing agents. Compete4yourseat.com, another matchmaking site, helps travelers connect with agents to find lower airfares. Travelers fill out a trip request form on the home page and once an agent bids on their requests, they can log in to view the deal.

Not unlike the online dating world, niche sites have begun to emerge. AdventureLink.com, for example, aims to connect travelers to adventure specialists, whether a tour operator or a travel agent. Though currently in test mode, it has 50,000 trips in its database that customers can search, and it plans to add travel agents this fall.

The new matchmaking services appeal to travelers used to doing Web research - but frustrated with online booking engines - while allowing agents, who have been squeezed by competition from online travel companies and commission cuts in recent years, to expand their reach and connect with new customers.

"We're combining offline personal travel expertise with the online world," said Brian K.Y. Tan, founder and chief executive of Zicasso.com, which went live in March, after a four-month test. Zicasso doesn't have a large number of agents in its roster.

"Our approach is about the quality of the travel companies and agents, not quantity," said Tan. Travel agent membership to Zicasso is invitation-only, and over the last two years, Tan and his wife, Yuchun Ku, say they have personally picked the 150-some agents and tour operators that are listed in the company's online network under "Explore." A major requirement, said Tan: "The agents who are selling that trip to X country need to have traveled there."

Zicasso forwards trip requests to specialists "whom we feel are the best personalized match," said Tan. Companies pay Zicasso a commission when a lead turns into a sale.

Tripology.com, which has been operating in test mode since June of last year, takes a more self-selecting approach. It has more than 7,500 agents who pay for every traveler referral they choose to respond to. While the site reviews each agent's application before they can receive leads, Tripology operates like an open marketplace. Travel agents "select those trips in which they really feel properly suited to handle and frankly want to handle," said John T. Peters, Tripology's chief executive.

The sites plan to keep agents honest by encouraging users to provide feedback, including ratings and comments about agents (think TripAdvisor for travel agents). Tripology.com lets anyone who has used the site comment on agents who responded. At Zicasso, only travelers who have booked a trip are eligible to write a review.

But does it work? I decided to try to find out, by coming up with two potential vacations - a two-week hiking trip to Patagonia, and a weeklong stay at the Rockhouse hotel or a similar resort in Negril, Jamaica - and then sending my requests to Zicasso and Tripology. (I sent my requests from my personal e-mail address, so that the agents would not know the query came from a reporter for The New York Times.) The results were mixed.

Zicasso took about a day to get back to me about my Negril request. Though the agent recommended a hotel that was not as design-conscious as the Rockhouse - a key element of my trip request - it was less expensive, and the flights from New York were nonstop. A day later, I received an e-mail alert with contact information for another agent who specialized in the Caribbean but was suggesting an itinerary above my budget of $2,000.

In response to my Patagonia trip request, the site sent me some sample itineraries to review and asked for more clarification about my budget and desired activities before offering to put me in touch with specialists.

From Tripology, I promptly received responses from three agents competing for the Patagonia trip. Two of them felt like canned package deals with little detail on hotels and transfers, but they both specified that the options were simply suggestions and could be customized to fit my needs. One response from a boutique adventure tour operator from Dallas, suggesting a 10-day trip at $2,790 a person, arrived less than an hour after I submitted my trip request.

A third agent, from Seattle, sent an enthusiastic note detailing his love for the region, pointing out that he had traveled there, and asking for more details about accommodation preferences. After receiving my response, he sent me two detailed 12-day trip proposals (one for $3,795 a person, the other for $4,349 a person) with descriptions of each hotel, including photos.

The responses for the more specific trip request for a week at the Rockhouse hotel in Negril at a better price were disappointing. One agent recommended a hotel based on TripAdvisor reviews. Another said the Rockhouse hotel was fully booked, when it wasn't - I called and checked.

Peters of Tripology said it was possible the Jamaica hotel was fully booked when the agent checked, as hotel reservations can "change by the minute." As for our trip request for a better vacation rate, he said, "If you're out trying to see if you can save $10 or $20 just looking for cheap, cheap, cheap, that's not what we're about. What we're about is value, and destination and product expertise."