Chasing eclipses around the world. 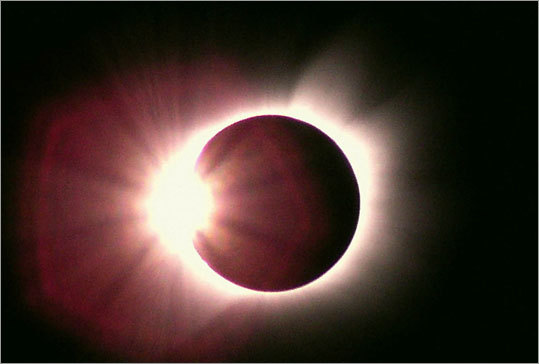 (Fred Espenak photo) The sun's corona (hot plasma registering 2 million degrees) is only visible during a total eclipse like the one viewed in Libya in 2001.
Email|Print|Single Page| Text size – + By Jane Roy Brown Globe Correspondent / July 6, 2008

I saw my first total solar eclipse in 1991, in Puerto Vallarta, Mexico," recalls Dan McGlaun, 44, of Belleville, Ind. "Everybody calls that The Big One, because it was one of the longer eclipses on record. Where I was, it lasted 6 minutes, 48 seconds."

Ever since, McGlaun, a project manager for an electronic-imaging company, has planned his vacations around catching the next total solar eclipse, or maybe the one after that, depending on the location and whether he can afford to get there. The five other eclipses he has viewed have taken him to India, Egypt, Turkey, Aruba, and Zambia. (His wife, not an adventurous traveler, takes their children to Disneyland.)

"I've seen each of my three kids being born, I've seen the Taj Majal and the Grand Canyon, and nothing compares to a total solar eclipse," McGlaun says.

On Aug. 1, the next one will travel a narrow band across northern Canada, northern Greenland, the Arctic, central Russia, Mongolia, and China. At 4 that morning, McGlaun will board a plane in Germany for a 12-hour flight over Norway and the North Pole. "We'll intercept the shadow and stay with it as long as we can," says McGlaun, who describes himself as "a total eclipse junkie."

When he and fellow eclipse-niks use the word "eclipse," they are not talking about lunar, annular, or partial solar eclipses. They are referring to the supreme natural spectacle, the event that some say is worth spending your last dime to get to Ulan Bator or Cape Town to watch, even if it's for a mere 45 seconds (as in India, in 1995): the total solar eclipse.

"It's almost a spiritual event," says Harvey Greenberg, 64, a business consultant in Waltham, who has traveled to six eclipses. Like many fans, he is smitten with the event's compelling beauty: "Minutes before totality, the temperature drops and the light is gray, like twilight. The wind picks up, and birds begin chirping like it's the end of the day. Then comes 'the diamond ring,' this last bit of intense light [which bursts beyond the circle of the moon], and people start shouting. The sky is a rich, dark blue. When the sun begins to emerge again, people cheer and hug one another."

Others rhapsodize about the "streamers" radiating from the sun during totality. These are particles shooting from the sun's surface at thousands of miles per hour, but the movement doesn't register to the naked eye. "They appear stationary, scintillating in a beautiful sky, like diamond fire," says Peter Leavitt of Newton, whose wife, Mimi, runs an eclipse-focused travel company, Winco Eclipse Tours.

Although some insist on watching the spectacle in solitude, the presence of a crowd adds to the thrall for many, like McGlaun, who describes the social atmosphere as "Woodstock-esque, but without the drugs and the love."

One veteran viewer believes that the alignment of the moon and sun may even exert a physiological effect: "Most people don't realize it, but you start not being able to think. It's like climbing a high summit over 20,000 feet," says Xavier Jubier, 40, a corporate IT manager in Paris, who also leads adventure-travel expeditions to eclipse sites. "I don't think there are medical studies on this, but it feels like your whole body is in some kind of trance. You have a hard time concentrating on anything else."

Astronomically speaking, the phenomenon of a total solar eclipse is fairly common, occurring every year or two: The moon passes between the sun and Earth, casting its inner shadow, or umbra, along a path 10,000 miles long but only about 100 miles wide, or less. This "path of totality" literally narrows the field for eclipse viewing to less than 1 percent of the Earth's surface.

The location challenge only ups the ante for veteran viewers. Fred Espenak, a.k.a. Mr. Eclipse, is an astrophysicist at NASA's Goddard Space Flight Center in Greenbelt, Md. He has calculated the paths of totality and published them, with charts, maps, and other data, in the "Fifty Year Canon of Solar Eclipses: 1986-2035" (Sky Publishing, 1987), the eclipse-chaser's vacation guide.

The path of the eclipse, however narrow, is certain, but the weather is another matter. Espenak, who has shown up for 20 eclipses since 1970, lost five of those to cloud cover. As a professional eclipse-viewer, he is philosophical about it. But for people who quit their jobs or take a second mortgage to get to the Gobi Desert, a cloud-blown eclipse can be devastating.

Enter the eclipse travel industry, which tries to pare down the risk of bad weather and, should clouds roll in, buffer disappointment with an intriguing itinerary. Espenak helps organize eclipse trips of 75 to 400 people, run by Oklahoma-based Spears Travel. This year he helped select a location between the Gobi and the Taklamakan deserts, in northwestern China, which presents a 70 percent chance of clear skies. "You make these choices based on [long-range] climate statistics," Espenak says, "but what you get on eclipse day is [short-term] weather, so you just try to stack the odds in your favor."

Mimi Leavitt of Winco Tours says that since launching her first trip, in 1963, all 11 tours have yielded clear viewings. She has a secret weapon in her meteorologist husband, who is a fellow of the American Meteorological Society and a member of advisory committees of the National Weather Service and National Academy of Sciences. "Peter picks a location based on the weather, then I plot the itinerary," she says. "Plumbing and amenities are not our priority." Winco's 17-day expedition this year will wind through China, culminating in the desert near Yiwu for the eclipse.

Jubier's travel company, Eclipse City, often partners with scientific expeditions. In 2006, he took a group to Libya, where he worked with the country's military to build "a cozy camp" in the middle of the Sahara, using military planes and helicopters to get people around safely. Three years before that, he flew 80 people from Cape Town to Antarctica, where they became the first travelers to witness a total solar eclipse from that continent. It lasted 1 minute, 24 seconds.

"The sun was just barely over the ice, and it was the best spectacle I have ever seen," Jubier says. "One woman sold her house to pay for the trip. After the eclipse she said, 'Now I can die.' "

McGlaun even has plans for a post-mortem viewing: "It's in my will that in 2024 my survivors have to open my urn and let me see the eclipse from my front porch, because the shadow will pass right over my house."

How to plan for it