Teas and a taste of Tajikistan in Boulder 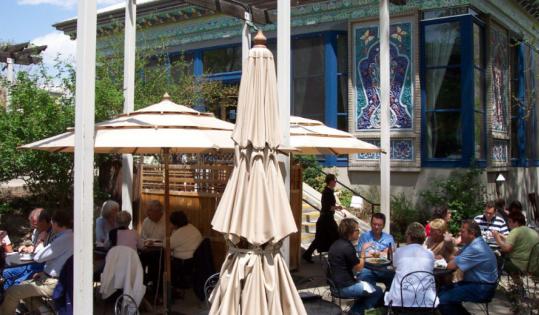 BOULDER, Colo. - This blissed-out city boasts a little bit of Tajikistan. With its brightly painted ceramic panels standing in bold contrast to the towering Flatirons beyond, the Boulder Dushanbe Teahouse is a vision. It was a gift from Dushanbe, Tajikistan, Boulder's sister city, and built by more than 40 artisans in several Tajik cities, then shipped over in pieces and assembled in its location next to Boulder Creek and steps from the city's downtown pedestrian mall.

In a community where life revolves around outdoor activities, the Teahouse is a calming oasis. But Boulder is made up of more than hikers and rock climbers. This unique spot, celebrating its 10th anniversary, meshes with the city's well-earned granola image as well. (A waiter at a local burrito joint, when asked for directions, noted, "I'm the wrong guy to ask about tea; I have to go ask one of the hippie waitresses.") Even students from nearby University of Colorado flock to the vibrantly colored building, especially for afternoon tea.

Teahouses serve as gathering places in Central Asia, and many are decorated with Persian art, using motifs from nature. The Boulder Teahouse reflects that tradition, with an intricately hand-carved and hand-painted ceiling and 12 carved cedar columns. The effect, both inside and out, is stunning. You feel like you're in a welcome, but very exotic space. Floor-to-ceiling windows on three sides of the main dining room and a large skylight over a fountain in the middle, make the teahouse very bright, even on a gray day.

The focus, of course, is tea. It can take time to wade through the thick menu of 80 varieties. But nobody rushes you. And if you're lucky enough to be sitting at a topchon (the traditional Tajik table), you can nestle against the pillows and peruse the selections in maximum comfort. Some highlights include rooibos tisanes, which have been shown to have many beneficial health properties; yerba mate, very popular in South America and high in caffeine; and rare and delicate white teas.

Tea arrives in individual pots accompanied by a timer. The server offers advice to each diner about when to remove the basket of leaves from the various pots.

Under the stewardship of chef Kyle Mendenhall, the food is equally impressive. The teahouse serves breakfast, lunch, and dinner on weekdays, brunches on weekends. Mendenhall, who has been here six months, recently overhauled the menu with the notion, he says, of "staying true to our roots and where the teahouse comes from." As a result, there are Persian dishes, some marked "world cuisine," and others that are prepared with tea, such as lapsang souchong brined pork. His Persian food, says the chef, isn't exactly authentic, but rather based on traditional recipes. When he decides what to serve, he's mindful of his audience.

Hence, he makes round balls of kufteh out of chickpeas instead of the traditional beef or lamb. "We like to do a vegetarian option," says Mendenhall. Kuku, another Persian specialty, Mendenhall describes as "a cross between an omelet and a souffle." It arrives full of cauliflower, with a cumin-scented yogurt sauce and the house bread, similar to crostini. An appetizer of mojama, loin of Spanish tuna, has been cured for days, dried for a few more, then sliced paper thin, its saltiness cut by lemon and olive oil. The fish is garnished with a frisee salad. The signature dessert, gingerbread, is made with tangerine tea and topped with five-spice whipped cream and orange syrup.

If you didn't come blissed out, you'll leave on a cloud.