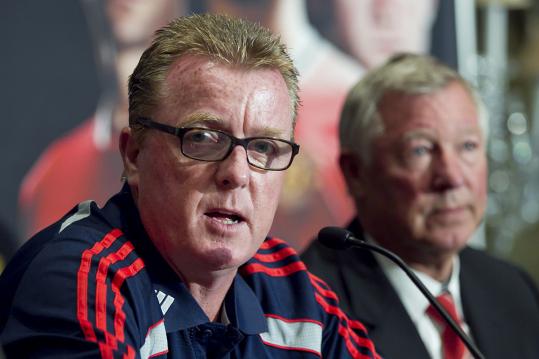 Steve Nicol brought stability and success to the Revolution as coach for 10 of the team’s 16 seasons of existence, a reign that ended yesterday.

Nicol, 49, and investor/operators Robert and Jonathan Kraft “mutually decided to part ways,’’ according to a team release.

“At the end of the day, we pretty much had great years here,’’ said Nicol, who was the longest-tenured coach in MLS history. “If the team is not doing well, that’s part of the game. It was a good time, a good experience, and there were certainly more good days than bad ones.

“I have nothing but good things to say about the Krafts. [Yesterday] wasn’t easy for them, either, but we parted on good terms and I thank them for giving me the chance to be head coach. I worked with a lot of good players and good people and it’s time to move on.’’

Nicol said it’s too early to predict what’s ahead.

“It’s not something I’ve had any time to think about,’’ he said. “The only thing I’m thinking is that I was lucky to be here for 10 years and do some of the things I’ve done. Obviously, not winning the MLS Cup - sometimes you don’t always get what you deserve, and, certainly, the teams in those finals deserved to win.’’

Nicol moved to the United States in 1999 to coach the Boston Bulldogs, a minor league team based in Framingham. Former Revolution general manager Brian O’Donovan hired Nicol as interim coach for the final two games of the 1999 season, and then offered him the position on a permanent basis. But Nicol turned down the proposal, saying he lacked the required experience.

In 2002, Nicol was named Revolution assistant coach and, after the team started the season with a 2-4-1 record, he again took over as interim head coach, replacing Fernando Clavijo. That marked the Revolution’s fifth coaching change in their first seven seasons.

“Every club needs stability and direction and I think I brought that,’’ Nicol said. “Otherwise, we would not have had the success we had. I’m really proud of that, for the supporters and the Krafts.’’

The Revolution were on the verge of postseason elimination in 2002, but rallied to close the season with a 5-0-1 record, advancing against the odds to the MLS Cup final. The Revolution lost, 1-0, in two overtimes to the Los Angeles Galaxy before 61,316 spectators at Gillette Stadium.

Nicol was named MLS Coach of the Year and the team soon became established among the perennial title contenders.

“It is a combination of a lot of things,’’ Nicol said. “Everyone believing in what we’re doing and, obviously, when you have good players who understand their roles. Any club that is successful has stability and good players.’’

Late-season rallies and strong runs into the playoffs became a trademark of the Revolution.

“It was a couple of things, the players believing in what I was trying to do and having good players, as well,’’ Nicol said.

But the Revolution began to decline soon after the 2007 MLS Cup, a 2-1 loss to Houston at RFK Stadium. The team was losing key players to Europe, the expansion draft, and retirement. Trades failed to produce expected results, foreign imports either performed below expectations or did not fit in, and Nicol lost his ability to pull rabbits out of the MLS draft hat.

In 2010, the Revolution remained strong defensively, threatening team records for consecutive shutout minutes and reaching the SuperLiga final. But the Revolution lost direction this season, finishing tied with Vancouver for last place in the overall MLS standings with 28 points.

“We all agreed a change of direction was needed to reverse the trend of the past couple of years,’’ said Jonathan Kraft. “Stevie was a successful head coach and a tremendous ambassador for the Revolution for the past decade and set a high standard for success. We thank him for all of his contributions.’’

Goalkeeper Matt Reis, who joined the Revolution in 2003, said he understood the decision even as he’ll miss Nicol.

“It’s not a total shock but when it does come down the line the Stevie Nicol era is over, it’s very, very sad,’’ Reis said. “Stevie is someone who gave me a chance and had faith in me to get out there and get the job done and I’ll always thank him for it.

“It’s unfortunate, but when players don’t perform and results aren’t there the coach is the one who gets the ax. But, every game and every year we went out there and played for him. He was definitely what they call a players’ coach. He commanded the respect of everyone in the locker room. It wasn’t a lack of effort on our part - we went out game in and game out and gave our all for him. This year and last year it didn’t work out, we didn’t get the bounce of the ball we would have liked. But when you miss the playoffs two years in a row, something’s got to give.’’

The Revolution will resume practice this week and have invited Colombian defender Oswaldo Henriquez of Millonarios to participate as a guest player. Assistant coaches Steve Myles and Remi Roy are expected to conduct training.