Walking around downtown, Boston’s international character is barely visible. So Mayor Menino’s plan to broadcast the World Cup finals on City Hall Plaza — and the explosion of interest in the tournament, replete with costumes and flags, at downtown sports bars — is a welcome expression of the city’s makeup.

The fact that Boston is among the most international of American cities is not evident at most times in its public center, amid all the tourist sites, office towers, and expense-account steakhouses. But Boston is a diverse city, more even in terms of national origin than race: while about 1 in 6 Massachusetts residents is foreign-born, in Boston that number is closer to 1 in 3.

The World Cup gives Boston a chance to show its true face. From Roslindale to Beacon Hill, thousands of people have taken to the streets wearing the colors of their ethnic homelands and proudly supporting their favored squads. The city’s melting pot will be on even greater display most prominently July 11, when a multinational crowd of fans will converge on City Hall. The scene will be festive and multi-cultural — and truly Bostonian. 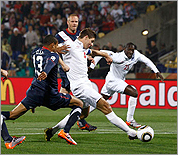 Photos: World Cup,
US vs. England