After shunning BC, Dartmouth standout commits to Georgia 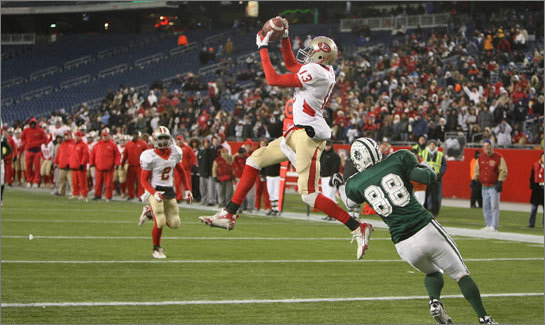 In May, Dartmouth tight end and highly prized prospect Arthur Lynch-Fontaine appeared set to spend his Saturday afternoons in The Heights. However, the soon-to-be senior has instead decided to go "Between the Hedges."

Lynch-Fontaine, who played a major role in the Indians' run to last year's Division 1 Super Bowl, made a verbal commitment to Boston College in May. But Tuesday he confirmed he has committed to suit up for the University of Georgia next fall.

When asked about why he chose Georgia, the 6-foot-4, 245-pound tight end / defensive end said that he felt he'd have a greater college experience at a school that wasn't as familiar to him as BC was.

"There's nothing wrong with [BC]," he said in a phone interview Tuesday night. "They have a great football program, but I was so familiar with the school... Part of college should be about going off to do your own thing for four or five years and mature as a person -- academically, physically and mentally. Just do your own thing for a couple years.

"With BC, I would have got a great education, a great degree and a great football career if it had played out, but I wouldn't have got the same experience because I was so familiar with it."

Despite the verbal commitment to BC in May, Lynch-Fontaine remained undecided and told his mother that he needed to see if "something was out there for [him]." He then embarked on a tour of multiple schools including Southeastern Conference rivals Georgia and Florida, as well as a group of Atlantic Coast Conference schools that included North Carolina, North Carolina St., Virginia and Maryland.

After taking another month to mull things over -- a process that he dubbed "torture" -- he decided that he needed to take another look at Georgia. He met with some of the team's players and coaches, including head coach Mark Richt and tight end coach John Lilly, the man that had recruited him originally. The second visit -- which occurred last week -- was the clincher for him.

With this matter finally closed, Lynch-Fontaine now looks forward to starting practice with the Indians Monday, the first official day schools can hold practice. He said that the Indians, which fell to Everett in overtime in the Division 1 Super Bowl, are returning a strong group of starters this year and believes that, despite the loss of former tailback and two-time Globe Division 1 Player of the Year Jordan Todman (now at UConn), another successful season is in the cards.

But he admitted that he's already had thoughts about playing in front of 90,000 fans at Georgia's Sanford Stadium and in one of the top conferences in college football next year. The Bulldogs are the preseason No. 1 in all of college football.

"I'll be nervous when the first game comes, but when you're out on the field, it's the same... You just block it out and play football."

"We’re just really excited for him to have the opportunity to go to the University of Georgia and play in the SEC," said White. "He’s extremely happy and we’re happy for him.