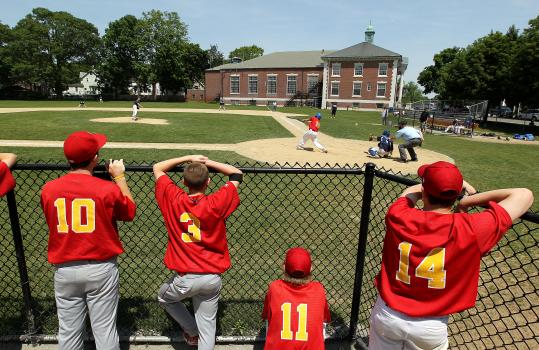 BRAINTREE: At French’s Common, the Town Hall juts out into right field and balls that bounce off its wall are in play, while anything over the roof is considered a home run. (Pat Greenhouse/Globe Staff)
By Michael Mancinelli Globe Correspondent / June 3, 2012
Text size – +

As the clock ticks down on Andrew McBride’s baseball career at Archbishop Williams High, the graduating senior will look back at the Bishops’ home field at French’s Common and instantly picture his father, Mitch, sitting at every game beneath a Braintree Town Hall air-conditioning unit just outside foul territory.

Arguably one of the quirkiest ball fields around, French’s Common is the only ball park with a town hall jutting out into play in right field, just 150 feet from home plate. Everything hit off the wall is in play. A ball that lands on the roof top is a ground-rule double. Balls sometimes skip around the building into a parking lot or down a stairway.

“I've been a pitcher here for three years and I’ve kind of realized it’s more of a hitter’s field than a pitcher’s field, so I can’t be aggravated when I pitch here,” said McBride, a righty from Abington. “You’ve got to play more as a team here. It’s all about defense when you’re here. It’s a lot different playing here.”

With its unusual layout and wild ground rules, the historic French’s Common diamond and adjacent Braintree Town Hall provide an odd home-field atmosphere for Archbishop Williams. But it is just one of several baseball fields south of Boston with odd characteristics, including a huge oak tree in play at Frothingham Memorial Park in Easton and a high chain-link fence at Strong’s Field in East Bridgewater.

At Archbishop Williams, Bishops coach Pat Clifford, who played at French’s Common on Archies’ state title team in 1992, spends a bit of time reviewing ground rules for visiting teams before each regular season game. Some things Clifford leaves intentionally gray - he once had a player run up the first-floor stairs to make an out in a tournament game.

While French’s Common can no longer host tournament games under MIAA rules, the first thing to know is there is no outfield fence at the park. Most of the two-story town hall acts as a wall, where the bounce is in play. A hit that lands on the roof is a double but if the ball hits a green pavilion on top, or clears the roof all together, it is a home run. Part of the building is only one-story high, providing an easier target for a short home run.

For easy extra-base hits, balls that roll under the first-floor staircase or down into the basement stairwell are ground-rule doubles.

If a hit kicks around the back of the Town Hall, fielders have to run into a parking lot after it. Stranger still, the visiting bench is situated so it creates a blind spot between part of the backstop and third base.

And the trees at French’s Common add yet another dimension. Each tree, including one behind third base with branches hanging in fair territory, is played like a wall — balls are live when they hit one of the branches. For a center-field home run, batters have to smash hits clear through the towering trees and hope the ball doesn’t get hung up in branches.

But when it comes to branches, a massive white oak tree in short right-center at Louis A. Frothingham Memorial Park in North Easton rivals any of the trees at French’s Common.

For generations, Oliver Ames High players have roamed the outfield of Robert “Buddy” Wooster Field at Frothingham learning how to play the tree like a wall — all bounces are in play. If a ball gets past the tree, outfielders will have to run around its thick base to make plays.

“It’s unique,” 26-year Oliver Ames coach Leo Duggan said of the tree. “But it really doesn’t come into play that often — surprisingly. People will say that it does.”

Frothingham was originally dedicated as a gift from the Ames family in 1930. Bordered mostly by a wrought-iron fence, the field was initially meant as a multisport facility.

The infield sits within the remnants of an old cinder track that makes for a sudden transition for outfielders and others making plays in foul territory. The track adds extra space in front of the backstop and makes for an enormous left field.

If Frothingham has a huge left field, Strong’s Field in East Bridgewater tempts hitters with a short left field, with a striking resemblance to Fenway Park’s dimensions. Both Strong’s and Fenway are 315 feet down the left field line and measure 420 feet at their deepest points.

The comparison with Fenway ends there, though. East Bridgewater’s answer to the Green Monster is a 14-foot-3 chain-link fence in left field, which dips down to a more average height around the 370-foot mark.

“I think the challenge for a lot of teams coming in is they all see that fence, that short porch, and they all want to take it out of there,” said Pat Cronin, East Bridgewater High’s coach since 1981. “In all the years I've been here, all our hitters have learned to hit the ball to the right side of the diamond and stay in the middle of the diamond.”

It is a strategy that has worked well for players like the Vikings’ senior captain Casey DeAndrade, who hit at close to a .500 clip during this regular season.

But with a new high school under construction on Route 18, complete with an on-campus field, Strong’s life as the Vikings’ varsity field is coming to an end.

Strong’s Field is off-campus, just like French’s Common and Frothingham Park. So, too, is Middleborough High’s home field at Peirce Playground, which is located off Route 105 in the center of town.

Peirce Playground features a high left-field wall similar to Strong’s Field — only it is constructed of stone and has a pair of staircases on either end leading to an elevated parking lot that offers fans a great view of game action.

Closer to the coast, at Marshfield High, the high school building itself acts as the right-field wall. In Hull, the Pirates play at an open field wedged between two softball infields.

On the North Shore, Seaside Park in Marblehead, with its historic wooden grandstand, has an outfield with park benches and trees bordering a street that acts as a fence. Further up the coast in Rockport, Evans Field has an old fieldstone grandstand built during the Great Depression and a 30-foot-high hill in play in right field. And home plate is less than 30 feet from a commuter rail station.

“You get very high hops,” said Salem High coach Jim Tgettis, whose team has played home games on Salem State University’s turf field this year. “You’ve got to slide much earlier or you’ll slide past the bag.”

Still, baseball purists would agree nothing compares to grass and some sandlot-style obstacles.

Michael Mancinelli can be reached at michaelmancinelli@comcast.net