In 4 years, Podurgiel played every inning 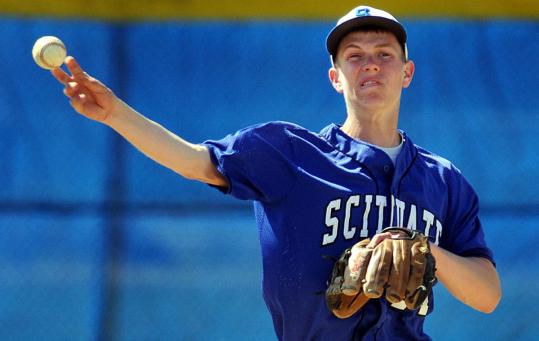 Scituate High senior shortstop David Podurgiel is solid defensively with a .960 career fielding percentage up the middle and a .461 career batting average. Below, senior first baseman Casey Burns steals second base in a May 13 game against Pembroke High. (Photos By Debee Tlumacki for The Boston Globe)
By Michael Mancinelli May 22, 2011

Chasing down a Pembroke High baserunner caught in a pickle between second and third base, David Podurgiel faked a throw to second, spun around to hide the ball, and promptly tagged the runner out. Clearly a veteran play, and one which left the Pembroke player scratching his head.

And there is no doubt that Podurgiel, a senior shortstop at Scituate High and a two-year captain, is a seasoned veteran. And it’s not a stretch to say that he is the Sailors’ answer to Cal Ripken Jr. His numbers aren’t nearly as gaudy as the 2,632 consecutive games played by the Orioles’ Hall of Famer, but Podurgiel has not missed an inning since his freshman year.

When the Sailors host Middleborough on Wednesday for the Patriot League Fisher Division crown, Podurgiel will close out the regular season having played 414 consecutive innings and 60 career games (including five tournament games in three years). With Scituate (12-3, 8-3 Patriot) in line to receive one of the top seeds in the Division 3 South sectional, his streak will continue as long as the Sailors keep winning.

Many talented freshmen develop into four-year starters in high school. But few make the impact that Podurgiel did right away. He’s been a consistent threat at the plate (a career .461 average) to help the Sailors qualify for the postseason four straight times. Plus he’s been solid defensively with a .960 career fielding percentage up the middle.

Now in his 17th season, Scituate coach Kevin Greer says he initially started Podurgiel as a freshman because of his baseball IQ.

“I had seen him come up through Scituate,’’ said Greer, an elementary school physical education teacher in town. “My assistant coaches had talked to me about it and that one year — he just had that baseball sense. He’s a very coachable kid. Once I put two and two together and he had a breakout freshman year, a great freshman year, I knew that I had to put him in a spot. He felt comfortable at shortstop. We thought about third base, we thought about second. But I like to be strong up the middle.’’

Jay Adams, who played at Boston College, coached Podurgiel, then age 12, with the Seadogs and recognized his talent. Their paths crossed again last year when Podurgiel played for Adams in the Bay State Games.

“I’ve loved the kid since the day I met him,’’ said Adams, adding that Podurgiel played six positions when he was 12. “He’s one of those quiet, hard-working, astute leader types.’’

Fast-forward to this season and Podurgiel is hitting at a .629 clip out of the third spot in the lineup. He says he’s stayed healthy through his streak of consecutive innings mostly because Greer’s careful approach to player health.

“My sophomore year I had a heel problem, but other than that I’ve been pretty healthy,’’ said the lanky 5-foot-11 Podurgiel. “I’ve been pretty fortunate that I haven’t had any really unfortunate things like a twisted ankle or anything like that.

Podurgiel, who is also a two-year golf captain, will attend Fordham University, majoring in finance. He is considering walking on to the school’s baseball team, but feels academics are more important. In a few weeks he’ll be inducted into the Scituate High chapter of the National Honor Society.

For now the focus is on making a deep tournament run, especially after Scituate was knocked out in the preliminary round each of the past two years. So far this season the Sailors have been one of the top teams in the area, with wins over Middleborough, Marshfield, and Duxbury, and also Cohasset twice.

“We’ve been playing together for so long we just build off that,’’ said Podurgiel. “We know how each other plays. Kids just really want to be here this year. Other than that we’ve just really worked hard over the offseason hitting and doing all that stuff to be prepared.

Aside from Podurgiel, senior pitcher Casey Burns has been key to the team’s success. He is undefeated through four starts with a 3.28 ERA and 47 strikeouts, and plans to attend Southern New Hampshire University.

But overall, the Trojans’ pitching has been better than he expected. On the mound, B-R (9-6, 3-1 Old Colony League) has utilized sophomore lefty Mike Bruemmel (2-0, 2.95 ERA), junior lefty Pat Chalmers, junior righty Connor Peterson, junior lefty Shane Holmes (a transfer from East Bridgewater who was injured early in the season), and senior Garrett Kelly in a middle relief role.

“We’ve taken our lumps, we’ve had a few bumps in the road here and there, but overall, 9-6, I’m very happy, very positive,’’ said Kearney. “It’s a great group of kids, they work real hard.’’

“Offensively we’ve been better than what I hoped,’’ said Kearney, adding B-R is hitting at a team .314 clip.

Foxborough hitting for charity The Foxborough High baseball team will play its regular-season finale against Catholic Memorial with an eye toward charity. On Saturday morning at 11, the Warriors will host a Hits for Hope game to benefit Curt Schilling’s Pitch for ALS.

Community members can pledge an amount of money per hit with their total contribution to the state chapter of the ALS Association equaling their pledge amount multiplied by the total number of hits by the Warriors.

Michael Mancinelli can be reached at mmancinelli@globe.com.