Coaches in the crossfire 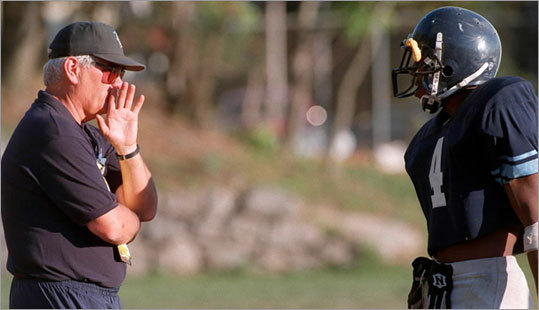 To some of Parker's critics, even those who witnessed English's 36-0 loss last Thanksgiving to a winless Latin team, the won-lost record is excusable. What's not acceptable to them is how Parker has presided over the decline of English's once-formidable football program. Winners of divisional Super Bowls in 1993 and '97, Parker's teams have since gone 42-76 and struggled for respectability.

Parker’s critics said he no longer exerts the energy, enthusiasm, and innovation to sustain a competitive program in an era when city coaches need to work harder than ever to overcome a multitude of challenges. Parker, 64, kept his coaching job after he retired last year from teaching at English.

“I love the man, but his time has passed,’’ said Clarzell Pearl, who starred for Parker’s teams in the 1980s and served as his assistant for several years, including last season. “It’s time for him to go.’’

Pearl and numerous other critics, including former NFL draftee Erle Garrett, who has coached against Parker and officiated his games, have expressed their views to Ken Still, the city’s athletic director. Still shares their opinion.

“Parker is a friend of mine, but it’s time for him to go,’’ Still said. “He’s still in the same mold he was 30 years ago, running the same stuff, and it doesn’t work.’’

Still said he would remove Parker if he could. But in a city where the best coaches routinely complain about ill-prepared, uncommitted, and underqualified colleagues failing their student-athletes, the hiring and firing of coaches is controlled by each school’s headmaster rather than the athletic director, who may be better suited for the task.

“I don’t know who’s trying to do Keith Parker in, but I’m not,’’ Duarte said. “Keith Parker is a gentleman who cares deeply about our kids. Some people only care about winning, but high school football is about developing young men to work as a team and developing them to understand the hard work it takes to achieve success. Keith Parker has done that.’’

Parker said he continues to give everything he has to the job.

“For 29 years at English High School, I have been the best I can be and I have helped the kids be the best they can be,’’ he said. “I understand that we all need to move aside one day for the younger guys, but I want to go out on my terms and I think I’ve earned that right.’’

As for Parker’s record against Latin, the coach described the rivalry as a monumental mismatch. Latin’s enrollment is three times the size of English’s, and while Latin is predominantly white (31 percent) and African-American (28 percent), English is mostly Hispanic (52 percent). As a result, English is far more competitive in baseball and soccer than football.

“I can win if I have the talent,’’ Parker said, “but I can’t wave a magic wand and make it happen.’’

Lucrative side job
Parker will coach another year because headmasters are empowered under the city’s contract with the Boston Teachers Union to hire and fire coaches. The policy, which gives union teachers preference for coaching positions, grants the final hiring authority to headmasters.

A number of other coaches disagree.

“Let our athletic director function like other athletic directors by hiring and firing his coaches,’’ said Garrett, the Brighton High basketball coach. “He has the expertise. Let him take the ball and run with it.’’

Under the system, coaching candidates are first interviewed by Still, who sends the headmaster a written evaluation and recommendation. Still said Parker is one of numerous coaches who have been hired or retained against his written or verbal recommendations.

“There are a whole lot of people who are coaching in the city who shouldn’t be,’’ Still said. “In a system of this magnitude, with 275 coaches, you would like to have 80-90 percent who are committed to the job and know what they’re doing. We’re not there yet.’’

Boston coaches rank among the highest-paid in the state, with salaries ranging from $2,777 for wrestling and tennis to $10,414 for head football coaches. There are too few coaches, however, and some of them see an inequity in the salaries.

“My [former] principal told me to get an assistant and pay him $500 out of my salary,’’ Brighton boys soccer coach Matt Krebs said. “I find it absurd that I was asked to do that.’’

Another problem, according to Still and others, is that too many teachers become coaches only for the extra check. The additional salary can boost a teacher’s pension.

“I know there are coaches who do it only for the money,’’ said East Boston High hockey coach Robert Anthony, a Boston police officer. “You hate to see it.’’

Paul Duhaime, the head baseball coach and assistant football coach at Burke High School, said he could tolerate colleagues enhancing their pensions if they were committed to coaching.

“We make very good money,’’ he said, “but some people just aren’t doing their jobs.’’

That was news to Stutman.

“I know a lot of coaches, and not one of them does it for the money,’’ he said.

The city can take pride in many of its coaches. But the Globe received numerous accounts of others selling short their athletes. The accounts ranged from coaches routinely calling off outdoor practices at the slightest forecast of rain to others showing so little interest in the job that they read newspapers or chat on cellphones during games and practices. Other coaches were criticized for failing to teach students the fundamentals of their sports.

Some headmasters were said to prefer appointing trusted allies rather than the most competent coaching candidates.

“You have headmasters who don’t know anything about sports and it doesn’t make any difference to them who’s running the program as long as somebody is running it,’’ said Turi Lonero, who coached boys soccer at East Boston High School for 20 years and has coached the men’s teams at Northeastern and Salem State. Lonero said he was not referring to East Boston’s current headmaster, Mike Rubin, the school’s former basketball coach.

Still said he would welcome hiring and firing coaches, but he is unlikely to get the opportunity because of opposition from the teachers union and headmasters.

“Headmasters should have the say about who coaches at their schools,’’ Duarte said. “We know the kids in our schools and we know what they need to develop and be successful.’’

East Boston’s Rubin, a director of the Massachusetts Interscholastic Athletic Association, also defended the hiring policy, although he acknowledged problems may arise when headmasters lack expertise in sports.

“Those headmasters need to reach out for help from people in the community who have some experience in athletics,’’ Rubin said.

Most headmasters assign teachers to serve as their athletic coordinators for a small stipend or as volunteers. Yet most coordinators have little influence, according to some, including Charlestown’s coordinator, Steve Cassidy, who called the job “kind of a joke.’’

The best coaches commit year-round to the job, enriching their knowledge of their sports, tracking the grades of their players, encouraging students to join their programs. Many reach deep into their pockets to provide uniforms and equipment players need to compete.

Personal investment
As for Parker, Duarte said the veteran coach has made invaluable contributions to many at-risk youths by steering them away from the streets toward brighter futures. Duarte also suggested that some of Parker’s critics have personal agendas. Pearl, for instance, has made no secret he would like to succeed Parker.

“To have somebody take a shot at that man, after all he has done to turn the boys in our school into men, is really sad and unfair,’’ Duarte said.

The challenge for Parker and most other coaches in the city is making the best of what they have. For many, like Margaret Cash, who retired last year as a science teacher at Snowden International School and remains the school’s girls volleyball coach, it means investing extra hours and personal savings in their student athletes.

Cash estimated she has spent about $5,000 a year on her students. She bought a winter coat for a player. She took another player and her siblings for a meal after she visited them and found their refrigerator empty. She also counseled the family of a girl who showed up at practice with her suitcase because her immigrant mother told her she needed to live with the coach.

“The idea is to keep their morale up,’’ Cash said. “I tell them all they are champions in their own way.’’

Many of her colleagues said the challenge for city leaders is finding more coaches who care.

“Unfortunately,’’ said Madison Park football coach Roosevelt Robinson, “we have a lot who need to go.’’