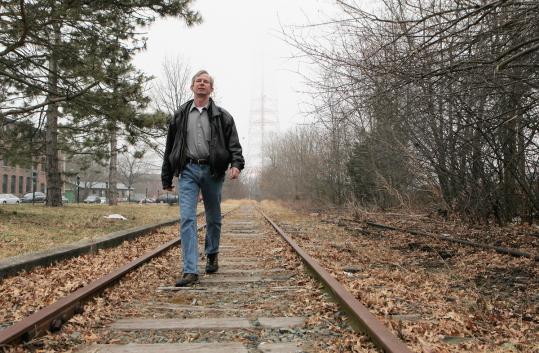 Nearly 15 years after planning started for a rail trail in Milford, residents can finally jog, stroll, or bike along a path there. However, the Acton section of the multitown Bruce Freeman Rail Trail is still in the design phase more than 20 years after it was first conceived.

In Dover, Medfield, Needham, and Newton, local officials and trail enthusiasts are looking at a new approach to building the recreational paths, one that could see trails done far more quickly and without relying on limited state or federal dollars.

As the communities look to create trails along unused railroad beds, many of them owned by the MBTA, all are exploring partnerships with the nonprofit Iron Horse Preservation Society Inc. The Nevada-based group pulls up the old track, sells the iron, and uses the proceeds to pay for the work and a basic walking path.

“It’s really the most exciting development that’s come along in decades,’’ said Needham resident Tom Connors, who has spearheaded efforts for the proposed 7-mile Bay Colony Rail Trail connecting his town with Dover and Medfield. “It’s a dramatically lower-cost option compared to going the state and federal highway funding route.’’

Groups traditionally seek state and federal grants for the design and construction of the trails, but the process can take years and cost millions of dollars. Connors said the price tag to build a single mile of paved rail trail, using the state and federal route, is about $1 million. A gravel path from Iron Horse would be free, with communities having the option to pay for an upgraded surface, he said.

“When communities look at how long it takes to get trails built, and the cost, they’re looking for faster, cheaper alternatives, and Iron Horse is one of those,’’ Watson said.

He said Iron Horse’s approach may not be for everyone. One downside is the rough surface, which he said isn’t ideal for rollerbladers, bicyclists, and wheel-chair users,

“There are pluses and minuses with that approach,’’ Watson said. “I can certainly see that it can create a viable trail faster than the more traditional approach, but it doesn’t necessarily yield a trail that’s optimal for all users.’’

Iron Horse, which was founded in 2005, has recently worked on several projects in Massachusetts, including rail trails in Chicopee, Danvers, Everett, Haverhill, Methuen, Rockland, Topsfield, and Wenham.

Officials in Danvers say they are pleased with the results, though the process was not without challenges. Kate Day, a senior planner with the town, said ties were not disposed of as quickly as they would have liked, and there were equipment breakdowns.

But less than three years after forming a committee to develop plans for the local trail, the path is packed with users, Day said.

“We would be nowhere without Iron Horse,’’ Day said. “It’s not fancy but it’s proved to be an approach that’s been met with tremendous satisfaction locally. You can’t wait decades for the federal money.’’

Jim Hattrup, president of Iron Horse, said he thinks communities should be looking outside government for funding, and his group is one way of doing that. He said it costs about $50,000 a mile to build a basic trail, and it’s paid for by selling the scrap iron.

“It’s catching on because people are tired of what’s been the rule,’’ he said. “If you follow the Bruce Freeman model, which is writing grants, it turns into a paper blizzard and then you can get a ‘no.’ I believe that people should find the means to develop it with their own local money.’’

But it’s an option that doesn’t work in communities like Milford, where the track has already been pulled up.

Reno Deluzio, who started working on the Milford project as a town planner, said the creation of rail trails is a time-consuming process because of onerous state and federal guidelines, funding limitations, and right-of-way negotiations. He said it took Milford four years to negotiate an arrangement with National Grid.

In Holliston, the town has been dealing with CSX Corp., a national freight railroad operation that owns the rail bed there, for more than 13 years.

“The major issue is property rights and permitting,’’ Deluzio said. “Those are the kinds of things that really chew up the clock.’’

Officials in Dover, Medfield, Needham, and Newton have all sent letters requesting to lease unused railroad right of way from the Massachusetts Bay Transportation Authority. Joe Pesaturo, an MBTA spokesman, said the requests are being reviewed and a recommendation will probably go to the agency’s board of directors in May or June.

There is no fee to lease the land. However, Pesaturo said, the T does reserve the right to reclaim the land for a future transportation project, or to lease it for additional revenue to utility companies.

While the four communities would be using the same rail line, they are working independently on their sections. In Newton, the Upper Falls Greenway would extend 1 mile from the vicinity of Easy Street south to the bridge crossing the Charles River.

Supporters say the Newton trail would offer good connections to other local walking paths, including the Charles River Pathway and loops to Nahanton, Cutler, and Millennium parks.

Eventually, advocates hope to bridge the 3.5-mile gap between the southern end of the Upper Falls Greenway and the start of the proposed Bay Colony line in Needham.

The Upper Falls Greenway project has broad-based support in Newton, from the mayor to business leaders and residents.

“I am pleased to partner with local businesses and residents on this important initiative,’’ Mayor Setti Warren said in a statement. “The Upper Falls Greenway will not only improve the quality of life for residents across the city, but will be beneficial to the environment, as it will encourage walking and bicycling.’’

Robert Rooney, Newton’s chief operating officer, said the city created a small working group to focus on the project, which could be done within a year. He said there are legal issues, such as the right of way and insurance, that need to be resolved before the committee can work on a design.

Rooney said the city is looking at the legality of bringing in a group like Iron Horse to do the work, and has contacted Danvers officials for a referral.

Jerry Reilly, a Newton resident involved in the project, thinks Iron Horse would be ideal.

“The magic here is you can get a new park built for free,’’ Reilly said. “The history of the big long ones is that they take many years and are very expensive. Let’s get this done fast and cheap. Before this idea came along, it would cost hundreds of thousands of dollars.’’

Dover residents will vote at Town Meeting in May on a proposal to spend $5,000 to study building a 3.7-mile trail through town. Board of Selectmen chairwoman Carol Lisbon said the Iron Horse approach will likely be reviewed as the town looks at its options.

“The traditional process worked well when there were funds available,’’ she said.