THIS STORY HAS BEEN FORMATTED FOR EASY PRINTING
Cross-Country Skiing 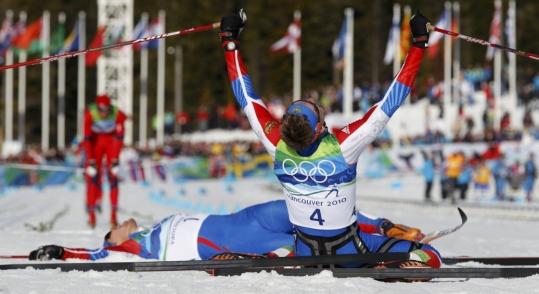 WHISTLER, British Columbia - Nikita Kriukov and Alexander Panzhinskiy clutched the Russian flag between them, bolting past the race marshals and down the straightaway for a victory lap at Whistler Olympic Park.

Appropriate, considering they also raced around the 1.6-kilometer cross-country course by themselves to cruise to a 1-2 finish yesterday in the men’s classic sprint, with Kriukov edging his countryman by the slimmest of margins.

By pushing the pace so ferociously from the outset, the pair negated Norway’s notorious closers, including Petter Northug, who took the bronze a whopping 9.2 seconds after the Russians zipped across the finish line in 3 minutes 36.3 seconds.

“I really didn’t agree upon a strategy with him,’’ Kriukov insisted. “It’s just that our coach warned us that there were going to be three Norwegians racing with us, and we really needed to get ahead. And then I saw Alexander speed up at the first elevation, and I tried to keep up.’’

So did the Norwegians, to no avail.

Soon, it was a two-man race.

“I tried to close the gap,’’ Northug said. “They went really fast, and I didn’t have the power over the last hill to catch them.’’

Northug was slowed down when he had to alter his line to avoid the pileup when Alexey Poltaranin of Kazakhstan lost control on a downhill turn more than halfway through the race and fell, taking out Norway’s Oeystein Pettersen.

The Russians were alone entering the stadium and put on quite a show the whole way, trading places with each push of their poles before each bent his right knee and scooted his left ski across the finish line.

They collapsed in a heap together, whooping it up, then smiled as they awaited the judge’s review.

When the winner was announced, Kriukov and Panzhinskiy grabbed a flag to celebrate the race they had dominated together.

They held the flag between them, trotting down the track-side stands in triumph, their skis and poles held high on either side.

“It was really unbelievable. Nikita is my roommate, and we’ve trained together many years,’’ Panzhinskiy said. “It really is a dream for us to be together on the podium.’’

There were no Americans in the final. Simi Hamilton of Aspen, Colo., failed to advance past the quarterfinals.

Women
Marit Bjoergen pulled away from Justyna Kowalczyk of Poland and Petra Majdic of Slovenia in a frantic finish to cross the line in 3:39.2 and end Norway’s gold-medal drought in cross-country skiing, winning the classic sprint.

Bjoergen made her move in the final downhill portion leading into the stadium, going by Kowalczyk on the inside in a curve to take a small lead. She held off the Polish World Cup leader and Majdic around the last bend before pulling away on the final straightaway.

Kowalczyk was 1.1 seconds back and Majdic was 1.8 behind.

American Kikkan Randall of Anchorage was eliminated in the semifinals.