Pat Petronelli, 89; trainer had marvelous way with Hagler, many others 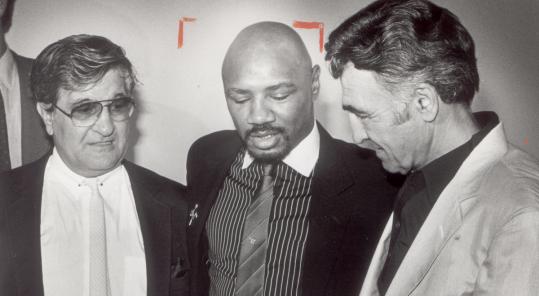 In 1969, 17-year-old Marvin Hagler moved out of his riot-torn neighborhood in Newark and walked into the gym operated by brothers and boxing trainers Pat and Goody Petronelli in Brockton.

“I didn’t trust anybody,’’ said the future middleweight champion in a 1980 Globe story. “I had a dollar in my pocket and I kept it to myself.

“Goody and Pat amazed me. We’d go out to lunch and they’d say ‘Keep your dollar. This is on us.’ I’d think they were going to take it out of my paycheck at the end of the week. But they didn’t. They said, ‘Marvin, when you make it big you can pay us back.’ ’’

Pasquale “Pat’’ Petronelli, who negotiated Hagler’s bouts with promoters and sat in his corner during Hagler’s seven-year championship run that ended with a controversial loss to Sugar Ray Leonard in 1987, died of complications of a stroke Sept. 2 at the Stone Institute life care residence in Newton. He was 89. Mr. Petronelli, who moved from Milford to Brockton as a youngster, had lived in Newton since 1998.

“Marvin had deals offered all over the country,’’ recalled Mr. Petronelli in the same story. “We couldn’t compete with these people moneywise. We told him, ‘Marvin, all that glitters is not gold. You lose a couple of fights with these people and you’re right back on the street. With us, you know we’re always behind you.’ ’’

“Marvin and Pat were like father and son,’’ said Betty Whitney of Newton, Mr. Petronelli’s wife of the past nine years. “There wasn’t anything Pat wouldn’t do for him. Pat was a warm person and full of fun, and there wasn’t an ounce of vanity in him.’’

Hagler declined to comment through a spokesman who cited his deep personal loss and request for privacy.

Hagler trained at the Petronellis’ gym from his first day as an amateur to his last day as a professional, and before he became famous as “Marvelous Marvin’’ he made a few extra dollars working for the Petronellis’ construction business.

Ward Street, where the gym was relocated, was renamed Petronelli Way in 1999. The Petronelli brothers were also honored in 2007 with the city’s Historic Citizens Award, and in 1983 by the International Boxing Hall of Fame when they were given the Al Buck Award as Managers of the Year.

Mr. Petronelli “was a down-to-earth guy who started in a small gym in Brockton and when he made good money managing Hagler, it never changed him,’’ said his son, Anthony Petronelli of Easton, a former North American Boxing Federation light welterweight champion who was managed by his father and uncle. “I can remember when the ice cream truck pulled up outside our house in East Bridgewater and my dad would reach into his pocket and treat myself and my other elementary school friends.

“People who used to fight for him and Goody still say to me, ‘Tony, he always made sure we had money in our pocket, food in our stomach, and a roof over our head. He felt boxing was essentially a poor man’s sport and that if he took them in, he would take care of them inside and outside of the gym. He gave boxing a good name.’’

Although the gym on Petronelli Way closed last month, Tony Petronelli is carrying on the family tradition at his Big East Boxing facility in Stoughton.

The Petronelli brothers were friends with the undefeated heavyweight champion Rocky Marciano, the “Brockton ,’’ and had talked with him about co-owning a gym in Brockton. Marciano perished in a plane crash on Aug. 31, 1969, the same year the Petronelli brothers opened their first gym, the Petronelli School of Boxing on Centre Street. They had previously rented space at the Ward 5 Club on Brockton’s East Side.

Goody Petronelli had retired from the Navy after a 20-year career while his brother had worked for the family construction business and had also run the gym at the Ward 5 Club.

Mr. Petronelli, the older brother by two years, had been an amateur fighter. His brother, Guerino (Goody) Petronelli, a welterweight, retired at the urging of his wife, but coached Navy boxers while in the service.

“Pat and Goody had a lot of respect for what Rocky was able to accomplish in the game of boxing because they were also fighters,’’ said Marciano’s brother, Peter of Plymouth. “Pat, first and foremost, was very knowledgeable about the fight game, but his expertise really came out in the business end. That’s where he excelled. He knew the lingo, and he knew the people in the fight game and how to get the most for his fighters from the promoters.

`“Both he and Goody were proud of their Italian heritage, and they were proud to represent the game of boxing. Pat was a down-to-earth, behind-the-scenes, blue-collar guy, soft spoken and respected with a terrific sense of humor.’’

One of Mr. Petronelli’s cherished mementos was a steel-wired bracelet with five loops.

“Marvin brought this back from Africa,’’ Mr. Petronelli told the Globe in 1980. “He gave one to me and to Goody. It’s hair from an elephant’s tail, and it’s supposed to be a sign of eternal friendship. Marvin put it on us and said, ‘Friends forever.’ ’’

The Petronelli gym had a mural of Hagler and a photo of Marciano on its walls.

“If you were Pat’s guy, he was on your side,’’ said Culbert, who trains youth boxers. “After my first pro fight, I went to Pat’s house for the prize money, and Pat said ‘Here you go . . . You’ll be a main event fighter before you know it.’ That made a 21-year-old kid feel pretty good.’’

Mr. Petronelli, who attended Brockton High School, was an Army veteran of World War II. He saw combat in Italy with the 88th Infantry Division’s Blue Devils. His first marriage ended in divorce, and Mr. Petronelli became a single and caring parent to Tony. “My dad and Pat were together 24/7,’’ said Tony Petronelli’s daughter, Laurie Melchionda of West Bridgewater. `“It really defined what he, my grandfather, valued in life.’’

In addition to his wife, brother, and son, Mr. Petronelli leaves four other brothers, Nick and Henry of Brockton, Guido of Halifax, and Ronnie of West Bridgewater; three sisters, Rose Clark of Yarmouth, Eleanor Walsh of Bridgewater, and Lorraine Santoro of Brockton; two grandchildren; and one great-grandchild.

Services have been held.

Globe correspondent Marvin Pave can be reached at marvin.pave@rcn.com