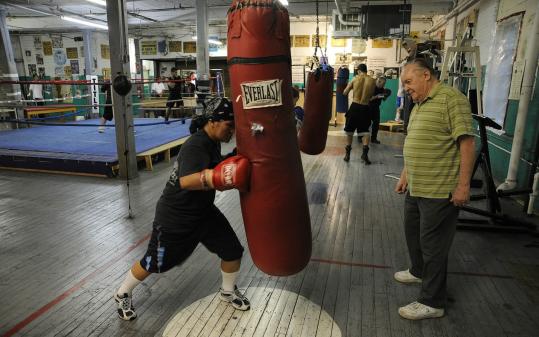 Stepping into Arthur Ramalho’s West End Gym in Lowell is like transporting back in time to the old days of boxing. Promotional posters from countless fights line the walls, and photos of boxers new and old form a room-sized collage in the main office. Only the hip-hop music playing in the background acts as a reminder of current culture.

It’s precisely this old-school feel that captivated producers of the upcoming film “The Fighter,’’ starring Mark Wahlberg and Christian Bale. The film premieres in November, with Wahlberg playing “Irish’’ Micky Ward, a working-class hero from Lowell who fought his way up from the streets to become a junior welterweight champion, and who is best known for a trilogy of fierce Rocky-esque battles with onetime world champion Arthur Gatti between 2002 and 2003. Bale’s character, Micky’s trainer and half-brother Dickie Eklund, was an equally talented boxer whose bright future was sidelined by his struggles with drug abuse.

Lowell Police Officer Mickey O’Keefe, 61, who trained Ward at the West End Gym during his comeback years, plays himself in the film, something he never expected.

“I thought I’d just have a small role,’’ said the veteran officer. “Now I’m a SAG member and am considered an actor — it’s surreal.’’

It was O’Keefe who suggested that Wahlberg check out Art’s gym.

“I told him he wouldn’t find a better gym,’’ he said. “The producers went to Art’s and fell instantly in love with it.’’

And so for seven days last July, Hollywood came to the West End Gym.

“Oh, the place was mobbed,’’ said Art Ramalho, the gym’s unassuming owner, 77, who has been devoted to boxing for more than 40 years. “Everyone wanted their face in the movie.’’

Ramalho’s gym has been in its current location since 1995, but he has been training fighters since 1968. He too has a role in the film, one which was unfamiliar to him.

Those who know Ramalho well, however, say the attention from Hollywood is just a bonus. What really sets the gym, and its owner, apart is the tireless work he has done over the years for the city’s youths. Just as Ward, himself a kid from a tough Lowell neighborhood, found his path in the boxing ring, so do many kids today.

“Art has never turned anyone away,’’ said O’Keefe. “He’s helped countless kids and he treats them all the same way; he gives each one respect.’’

Ramalho, a father of six, said his open-door policy fits in with his deepest convictions.

“I have a saying,’’ he said. “Building boys is better than mending men.’’

O’Keefe and fellow Lowell Police Officer Mike Miles are among a handful of police who routinely refer young people to Ramalho in search of discipline and direction. On the force for 30 years and working as a clinical social worker for the last nine, Miles said Ramalho is invaluable.

“I work with teenagers, some with behavioral issues, some substance-abuse issues, many from single-parent households without a male presence,’’ he said. “Going to the gym brings them confidence and humility.’’

At $25 per month for membership, the West End Gym remains affordable for just about anyone. For those who can’t afford it, Ramalho always makes room. “He doesn’t make a nickel,’’ Miles said. “But he changes the lives of so many kids.’’

Retired after 30 years as the director of the Lowell Council on Aging, Ramalho said he’s thankful his day job afforded him the ability to remain active in his passion for boxing.

On a recent Wednesday, the West End Gym was characteristically abuzz, with seasoned fighters training side by side with children as young as 7. As Colleen James watched her son Reinaldo train with 40-year boxing veteran Jack Morrell, she explained the effect the gym has had on her son, who began training there last year at age 6.

“This is the first sport he’s ever loved,’’ she said. “He has ADHD (attention-deficit hyperactivity disorder), and he is able to really focus on this.’’

James said she sometimes gets raised eyebrows from those who learn about Reinaldo’s favorite activity.

“Some people say to me ‘Boxing? Isn’t that extreme?’ But what it’s done for his self-confidence is amazing.’’

O’Keefe said the camaraderie at the gym transcends traditional roles held by the fighters outside its walls.

“Several police officers work out there, and so do some gang members,’’ he said. “They know who they are, but there is a respect there. They’re all here, working to improve.’’

Ed Anderson, 52, remembers training with Ramalho as a teenager. He said Ramalho’s devotion to youths has given them a second home.

“They come here and they can find their identity, be nurtured, and learn the importance of discipline,’’ he said. “It’s a place of hope, a place to find self-respect in getting themselves to do things they never thought they could do.’’

Listening to Anderson, Ramalho smiled humbly, and said comments like those from his long-time friend make him feel good about the work he has done over the years. One anecdote he shared from the movie shoot indicated that his paternal nature is contagious.

“Christian Bale bought a couple of fishing rods,’’ he said. “During long breaks, he would go out back to the canal and fish with the boy who plays young Micky.’’

From famed champion Micky Ward to the youngsters who see his pictures on the walls, those who come through Art Ramalho’s West End Gym say, movie or no movie, theirs is a community that benefits from the generosity and devotion of one man.

“Art puts his heart and soul into boxing and dedicates himself to the kids,’’ said O’Keefe. “We need people like Art to do the things he does.’’