Punching his ticket in the pros

Framingham boxer is fierce, flamboyant, and a fan favorite 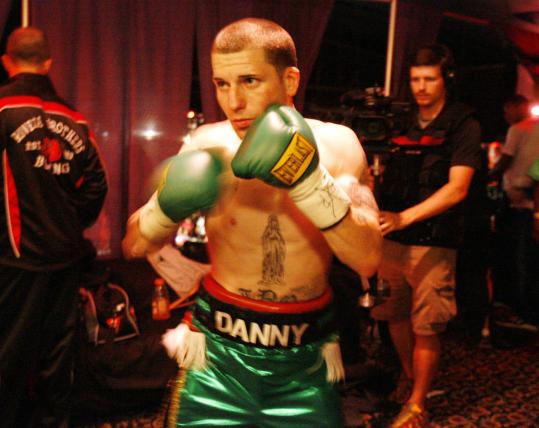 Framingham’s Danny O’Connor warms up before his bout Saturday night against Sebastian Hamel in Boston. The 5-foot-9, 135-pound junior welterweight has a 7-0 record since turning pro in September. (Jon Mahoney for The Boston Globe)
By Brendan Hall Globe Correspondent / July 2, 2009
Text size – +

BOSTON - Inside the ring, Danny O’Connor heard the voices.

In his seventh professional bout since turning pro in September, it was crucial for O’Connor to work in his right jab and open up the midsection against veteran Sebastian Hamel.

But when the 5-foot-9, 135-pound junior welterweight goes to work in a venue like this, the dimly lighted Roxy nightclub in Boston’s Theater District, he resists the urge to play to the raucous fan support.

Chants of “Danny! Danny!’’ resonated passionately throughout the hall from the moment he set foot in the ring Saturday night, and they did not wane until the early rounds - only to pick up again in the sixth, and final, round.

“It’s a special feeling, to not only know that everybody’s cheering for you, but that they came specifically to see you,’’ said the 24-year-old Framingham native.

“I saw people I didn’t even know were going to come. You do all that hard work in the gym, and when you’re able to showcase it, have everyone there cheering for me, it’s indescribable.’’

And yes, he does play to his loyal following.

He makes his entrance to the ring with music from the opening credits of “The Boondock Saints’’ playing on the sound system.

Wearing hand-crafted trunks and specially ordered green gloves, his pale upper torso highlighted by Irish-themed tattoos, O’Connor relishes his growing reputation as one of the region’s most charismatic - if not most popular - pugilists.

“Micky to me was a better puncher, but I don’t think Micky has as refined boxing skills as this kid,’’ said Leon Margules, executive director for the Hollywood, Fla.-based Seminole Warriors Boxing, which promotes O’Connor.

“With his amateur background, and being an Olympic alternate, this kid has the opportunity to win a world title. He reminds me of a young Paul Spadafora,’’ Margules said, citing a former International Boxing Federation lightweight champion.

O’Connor, who defeated Hamel by unanimous decision in his first six-round bout, demonstrated great balance and control for a guy who’s only been a pro for 10 months. He showed remarkable poise and agility in the ring - and a little bit of swagger. In the final round, he ducked under a right hook as the bell rang; the two exchanged several more punches and a few words.

“I honestly don’t remember’’ what he said to Hamel, O’Connor said with a laugh, beads of sweat dripping down his face as he greeted reporters. “One of those spur-of-the-moment things. But I told him it was a good fight.’’

His poise should come as no surprise.

A year ago, O’Connor was in Colorado Springs, gearing up as an alternate in the 141-pound weight class for the Beijing Olympics, a tremendous finishing touch on a proficient amateur career. He won more than 95 bouts as an amateur, including the US Future Stars national championship and the national Golden Gloves title.

Three months before Felix Manuel Diaz won the Olympic gold medal in the 141-pound class, O’Connor dominated the boxer from the Dominican Republic, 21-10.

O’Connor debuted as a professional Sept. 17 in Manchester, N.H., where he scored a second-round technical knockout over Jose Guerrido, and has quickly made some big strides. His win over Hamel last weekend upped his record to 7-0, with two knockouts.

Now, he looks polished. With exceptional footwork and a delivery that starts at his waist, O’Connor uses his swaying ability to get leverage on his opponent and open up their midsection.

The biggest climb has been adding power, but it’s also proven a task he quickly grasped. Early in January, during a match in Montreal, he hit Greg Jimenez so hard that his glove split open. The performance led to his first televised bout a month later on ESPN’s “Friday Night Fights,’’ where he defeated Jamar Saunders in a unanimous four-round decision in Hollywood, Fla.

Rather than putting in miles of daily jogging like boxers of past generations, O’Connor’s conditioning focuses on sprints at various distances and intervals, building up explosiveness. He’ll also take to the pool for swims.

“I think it’s part of the personality of boxing. He’s just incredible, so driven,’’ Cressey said. “You can leave him alone for an hour, come back and see him exhausted, soaked in sweat, dropped on the floor. We couldn’t ask for anything more for him. He sets a good example for the younger kids.’’

O’Connor and his management team are in turn happy with the results.

“You can just see it, in the way my body looks compared to before,’’ O’Connor beamed. “Physically, I’m stronger. Obviously, you don’t get stronger overnight. You’ve just got to keep working at it.’’

His manager, David Keefe, said, “The power stuff, you’re not going to see that overnight. Eric Cressey is one of the best strength coaches in the world. The strength I think we’ll see a little later on, but the conditioning you’re seeing now; Danny could have gone 10 rounds.’’

Next up? Margules said plans for O’Connor’s next fight were still being finalized, but he suggested there will be a bout late next month in Florida, followed by a return trip back to where it all started in Manchester.

On Monday afternoon, O’Connor spent part of his day driving around Framingham, looking for new fabric to use for his next wild trunk creation.

He went back to work on Tuesday. And you know he can’t wait to hear those voices again.