His attachment to race is heartfelt, literally 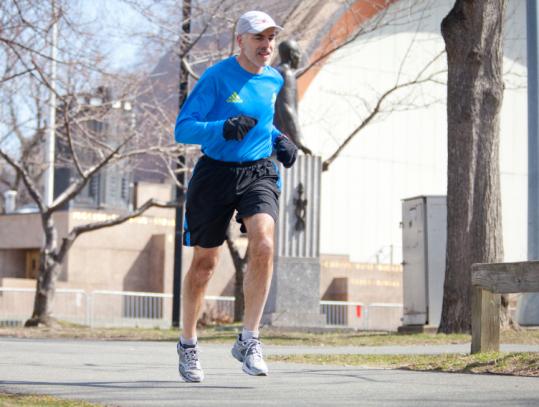 An incident of cardiac arrest couldn’t keep Bernie Zelitch off the roads; in fact, his fitness helped pull him through. (Erik Jakobs for The Globe)
By Amalie Benjamin Globe Staff / April 13, 2011

He collapsed on the commuter rail, his laptop falling from his hands. Bernie Zelitch, just a month before what would have been his 14th marathon, and fourth Boston Marathon, went into cardiac arrest. He had left work early, bound for Haverhill on the 1:10 p.m. train to pick up his 9-year-old daughter. He never made it out of North Station on that train.

Within four minutes, Boston EMS arrived and went to work on the unconscious man, applying shock treatment and breaking a rib, reviving him and lowering his temperature so he might regain some of the brain and body function that often gets lost in cardiac arrest patients lucky enough to survive.

He lost nothing. His body, molded by marathons, was able to withstand the stoppage of his heart, with help from doctors at Massachusetts General Hospital. And though he had to miss the 2010 Boston Marathon after his collapse last March 3, he won’t miss the 2011 race.

“Only 8 percent survive this,’’ Zelitch said. “And of the 8 percent, almost all of them have some brain damage. I like to say I’m just as stupid as before, but no more stupid. It’s incredible.’’

He was kept comatose for four days, and has little memory of that time. According to the doctor who performed the quadruple bypass surgery, Bruce Rosengard, the rhythm disturbance was caused by multiple blocked arteries — just two days after Zelitch checked out fine in his annual physical.

In his fog at the hospital, just weeks before the Boston Marathon, he kept asking his wife whether he could still run the race. He was focused on it, obsessed. It wouldn’t be possible, of course.

Zelitch, who was 58 at the time, feared he wouldn’t run again. He knew there was a chance that doctors would tell him it would be too much for his heart. But not long after his surgery — after deciding that the usual rehabilitation wouldn’t be nearly enough for him — Zelitch started walking.

His doctors had put no limits on walking, so once he got his atrophied muscles out of bed after two weeks, Zelitch started walking 10 miles a day. He asked if he could jog. He could. He asked if he could run. He could. And by October, seven months after going into cardiac arrest, Zelitch found himself on the starting line for the Chicago Marathon.

“I should have been thinking that I was king of the world, ’cause that’s what you’re supposed to think, or that you’re Kenyan,’’ Zelitch said. “But, in fact, I was not thinking that.

“I was thinking how vulnerable I was, that this could have been my last marathon for the very simple reason that if anything went wrong, that would have been it. I never would have risked my health or put my family through something like that again.

He ran the course in 3 hours 56 minutes, good enough to qualify him for Boston, though well behind his personal best of 3:33.

“And so, by the time I approached the Chicago Marathon, I was probably the only one of 35,000 runners who had negotiated a running pace with a cardiologist and my family. And probably the only one who had family who had the authority at Mile 17 to pull me from the race if I didn’t look good, which they didn’t do. I looked good. I felt really strong.’’

So, 13 months after he nearly died, Zelitch will step to the starting line for the 2011 Boston Marathon, after having to watch the 2010 race from the sidelines in Brookline, the first marathon he had ever watched.

He will, most likely, be wearing the official marathon shirt from the run he missed last year. He will, most certainly, be wearing a sign that says, “Thanks to Boston EMS/Mass General. Revived Repaired 2010,’’ as he attempts to run the course in 3:45.

It is, Zelitch says, “the time I actually feel most alive.’’

It is also likely a reason that he is alive at all. Had he not been at peak fitness to run Boston, he might have died last March 3 on that commuter train as it pulled out of North Station. Instead, he’s preparing again to run Boston, to go 26.2 miles on a heart that has been reconstructed and repaired.

“I just know that this is who he is and this is, besides family, the most important thing for him. I would say that this really is his identity. He’s a runner.’’