A passion for running, fueled by words 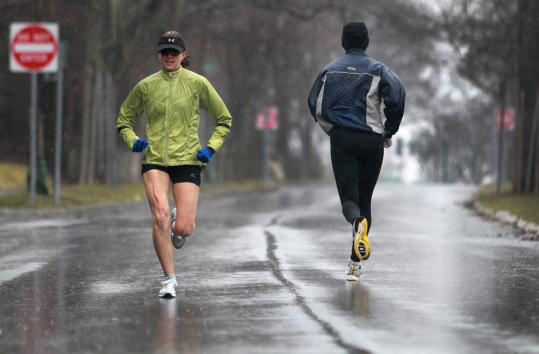 Much like parenthood, a marathon requires a commitment for the long haul. But that doesn’t mean you need to go it alone. Westford’s Kristina Pinto is proof.

A 33-year-old “recovering academic,’’ Pinto is a mother, wife, and runner. She also writes the popular Marathon Mama blog (www.marathonmama.competitor.com), a humorous, thought-provoking if sometimes irreverent column hosted by Competitor Group Inc., a media company that focuses on endurance sports.

On April 18, Pinto will line up for her fourth Boston Marathon, but it will be the first time she’s actually qualified for the legendary race based on her time.

“To me, the Boston Marathon is one of the world’s most significant sporting events because it celebrates athletic excellence among normal people who work and raise families while pushing themselves in sport,’’ she said. “It honors the passion for — not the profession of — running.’’

Pinto’s passion is evident in her work as a running coach for adults and teenage girls — she launched Mile Mannered Running (www.milemannered.com) last year — and her Marathon Mama blog. The column, she said, was intended to be a fund-raising tool, but it tapped into the greater running community. Competitor Group picked it up in 2009.

“I started writing it in 2006, because I had signed on to raise money for the Dana-Farber Marathon Challenge,’’ she said. “My husband suggested blogging as a way to update people about my training and fund-raising.

“I was reticent to do it at first, because it seemed like a big commitment. But I did it, and it has just snowballed from there.’’

These days, Pinto’s blog gets upward of 6,000 hits per month. Clearly, she’s caught the eye of runners nationwide with her wit, candor, and commitment to the sport.

“The most gratifying thing has been inadvertently motivating people,’’ she said. “Every now and then, someone will e-mail me and say they took some motivation from something I wrote, and that is just fantastic.’’

“Her writing appeals because she has a way of blending insight and humor that leaves the reader both satisfied and thoroughly entertained,’’ said Mary Holt-Wilson, a mother of three and triathlete from Westwood who writes her own blog, Mary: IronMatron (www.tri-ingtodoitall.blogspot.com).

“She has this strong, sharp wit that gives her posts a rebellious flair, yet she somehow always manages to stay in bounds — never stepping over the line into anything crude or insensitive.

Pinto has also found a nice synergy between her blog and coaching business.

“We met by me stalking her via the blog, and realizing we run similar paces,’’ said Meaghan Wilk, a running mom from Haverhill’s Bradford section. “I asked her if she was interested in meeting up for a long run.

“After several self-coached marathons, which netted mediocre performances, I asked Kristina to be my coach,’’ said Wilk. “I didn’t need the self-discipline, but someone who would understand my personality, my life demands, and who would truly listen to my goals.’’

Growing up in Carlisle, Pa., Pinto kept active, but wasn’t a runner. The epiphany came while she was living in Pittsburgh, studying for graduate school entrance exams. She stepped out one day to run some errands, and ran right into the Pittsburgh Marathon.

“At the Mile 10 mark, all these runners came running by,’’ she said. “It was a visceral experience for me to watch it. It just gave me goose bumps. It was one of those ‘I have to do that’ kind of things.

“As a poor postcollege student, I just wanted an efficient, cheap way to exercise. Then I saw this marathon, and it all sort of clicked for me.’’

So Pinto started running. And hasn’t stopped. “Running made me feel strong in a different way than any other physical activity,’’ she said. “Being outside and running gave me more of a sense of my own abilities, and what your muscles can actually do, and finding you can always do more than you think you can.’’

Her first race, a 5K, led to thoughts of tackling the marathon’s 26.2-mile distance. “It was nothing I’d ever entertained before,’’ she said. “If you told me in high school that I’d be a running coach and a runner, I would have thought you were nuts. I hated it growing up.’’

Pinto and her future husband, Brian Sawyer, moved to the Boston area in 1999 after she was accepted at Harvard’s Graduate School of Education, and married in 2000. In 2004, they had a son, Henry, and soon Pinto was eyeing the famed Boston race.

She entered the 2007 event as a Dana-Farber Cancer Institute team member, and introduced her Marathon Mama blog. But Pinto never expected the hand-in-glove relationship that developed between her blogging and her running, or how widespread her audience would become.

“I feel like the running and the writing have evolved together,’’ she said. “Running has helped me get stronger, and I think my writing voice has gotten more authentic and more powerful along with the running. They’ve started to coalesce.’’

“We mommy/athlete bloggers seek each other out because it’s lonely being a competitive athlete after you have children,’’ said Holt-Wilson. “It’s a relief to know there are others like us.’’

Pinto’s first Boston attempt ended prematurely; she dropped out at mile 16 with severe tendinitis, giving her a DNF (did not finish) in the record book.

“If you are doing it for charity, you feel like you owe it to the people who donated to your cause,’’ she said. “I was distraught to have not completed it. At the same time, it was incredibly motivating. Now I call it the DNF Club. If you’re in the DNF Club, you have perspective on what can happen that other people don’t have. It gives you so much more gratitude for finishing.

“Conveniently, I was very close to the Newton-Wellesley Hospital, so they just took me right there, gave me some crutches,’’ she said, laughing. “And I learned if you DNF, you get a free cab ride to the finish line, so that was a bit of trivia that I wouldn’t have known about.’’

Pinto did finish in 2008, and her time of 4:01 was close enough to her age-group qualifying mark (3:40) that she decided to earn her way into the race. After several attempts, she ran the Berlin Marathon in 3:39 last September. Then came the challenge to actually register for Boston. The field was filled in eight hours, she said, and many qualifying runners got shut out, creating a stir on the Internet.

“The site crashed a few times while I was trying to register,’’ she said. “It was nerve-racking.’’

The Boston Athletic Association added fuel to the fire by announcing faster qualifying times starting in 2013, to better manage a race that has grown to 26,000 runners. Coupled with the registration problems, the BAA became a lightning rod for complaints. But Pinto said the new standards are consistent with the organizing group’s mission of “honoring the top marathoners among us ‘regular folks.’

“I see this as a sensible response to a complex problem,’’ said Pinto.

“At the same time, the new rolling registration system takes some of the sparkle from a time that meets the standard because, in essence, you don’t know if your qualifying time actually qualifies you until the BAA lets you in, saying that you’re ‘enough faster than fast enough.’ ’’

Her response? “I plan to train hard to run faster and get a little older every day so I can qualify again at some point,’’ Pinto said in typical tongue-in-cheek style.