Julien is running a tight ship

Defensemen told to close the gaps 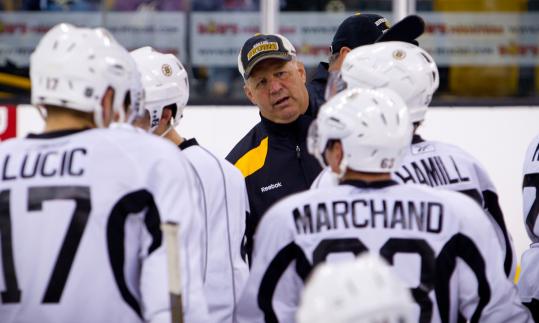 At the start of each season, Bruins coach Claude Julien has introduced a new technical approach.

Last year, Julien instructed his forwards to come back harder for the puck and thereby develop more speed through the neutral zone going the other way.

Two years ago, he wanted his forecheckers to go deeper on the attack and apply pressure up the ice.

This season is no different.

During the first two days of practice at TD Garden, Julien ran his defensemen through drills to emphasize that he wants them to keep tighter gaps with their forwards.

“Every year, no matter what happens, you always look for certain things to get a little bit better,’’ Julien said. “That’s an area we’ve identified. It wasn’t a major issue. But it’s an area we can get better at.’’

The approach is twofold. If the defensemen scurry up the ice and keep their gaps tight, they’ll be in better position to support the attack.

At the other end, assuming tight gaps, there won’t be as much area in the neutral zone for opponents to exploit. When gaps are too loose, other teams can generate more speed in center ice and leave the defensemen flat-footed.

Keeping tighter gaps should be aided by another core Julien belief: keeping a third forward high in the offensive zone. If that forward is positioned correctly, he’ll be a safety valve if the defensemen are up the ice. That way, the Bruins can reduce chances for opposing odd-man rushes.

“Our Ds can get that confidence if our third man is high, he can backcheck properly, and at least give them some confidence to stand up a little bit more at the blue line,’’ said Julien.

Second thoughts Because of the retirement of Mark Recchi, the Bruins will consider several replacements on the second line. Rich Peverley and Tyler Seguin are the leading candidates to serve as the new No. 2 right wing.

Regardless of who replaces Recchi, it will be up to Brad Marchand and Patrice Bergeron to reignite the spark they had last season.

The line will miss Recchi’s net-front presence and veteran savvy. But both Peverley and Seguin would be speedier options on the right side.

If their new right wing can stretch defenses and push defensemen back on their heels, more space should be available for Marchand and Bergeron.

Games approaching The Bruins will scrimmage for part of today’s practice. They will have a Black and White scrimmage tomorrow at the Dunkin’ Donuts Center in Providence. Wednesday will be their first preseason game, against Ottawa at Scotiabank Place - their first of four games in six nights. “We’ve got to be careful here,’’ Julien said. “Fatigue can set in pretty quickly after you’ve had tough physical testing one day, and had a pretty good skate [Saturday] and another one [yesterday].’’ . . . David Krejci scored a team-high 12 postseason goals last year because of a simple reason: He shot more. “We need that from David,’’ said Julien. “There was times last year where he was in some great scoring areas. He chose to pass instead.’’ . . . Seguin has pledged to show more jam and muscle in the danger areas as a second-year NHLer. Seguin weighed in at 190 pounds - he finished last year at 180 - to be stronger on the puck and in offensive situations. Yesterday, during down-low battle drills, Seguin popped Ference in front of the net . . . Seidenberg skated on the right side for the second straight day. Rookie Zach McKelvie was Seidenberg’s partner. Seidenberg has been more effective on the right side, although he can play on the left too.