Orr’s legend relished, remembered with fond memories of another era 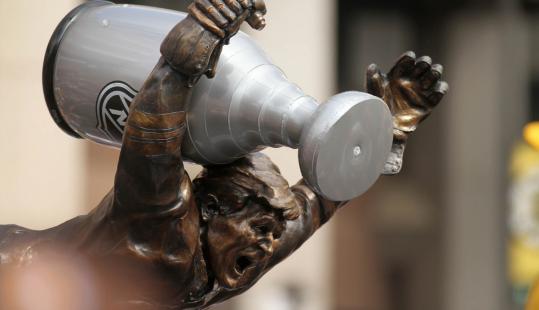 The Bobby Orr statue outside TD Garden was a shrine yesterday for revelers. (Jessey Dearing for The Boston Globe)
By Ben Wolford Globe Correspondent / June 19, 2011

Brian Cavanaugh was only 5 the last time the Bruins won the Stanley Cup. He remembers having pizza with his father and relishing the final glorious goal by Bobby Orr. The next day, they packed up the car and drove together from Malden to see the parade in Boston.

Cavanaugh is now 45, and his father has since died. But yesterday he paused at Orr’s bronze likeness outside TD Garden to dwell on his father’s memory.

“He would have been here today, no doubt,’’ he said.

Orr’s statue, a 110 percent scale representation of one of the greatest moments in hockey, was a shrine yesterday.

Young and old shouted Orr’s name as they passed and approached in silent reverie, taking photos or standing for a brief moment of reflection, as though the hockey great were a patron saint, honored not only for his talents, but for the old memories of family fandom.

“I met Bobby Orr when I was 2, and it was the strongest handshake I’ve ever felt,’’ said Timothy Gonsalves, 23, of North Redding.

He was with his grandfather, Jack Gonsalves, captain of security at an IRS facility in Andover, and they were heading home. Walking to their car, Jack Gonsalves spotted Orr in the parking lot.

“Bobby! Bobby! I want you to meet my grandson, Timmy!’’ he hollered, the two of them running toward him.

Orr led the Bruins to Stanley Cup victories in 1970 and 1972 — each time scoring the winning goal.

When “The Goal’’ won the 1970 Stanley Cup, Orr threw his arms up as he tripped over a St. Louis Blues player, leaping forward.

That scene was immortalized last year when the Bruins unveiled the more-than-600-pound statue on Causeway Street, outside the Garden.

Yesterday, Dennis Roy, 60, of Rowley snapped a photo of it.

The fans came from all over. Not just Massachusetts. Not just the United States.

Gilles Mazerolle, 52, who is from the Canadian province New Brunswick, said Orr “is the reason I’m a Bruins fan.’’

He and his son, Dennis, drove more than eight hours through the night to arrive yesterday morning in time for the parade. The two huddled beneath the Orr statue for a photo.

“I’ve been a Boston fan since I was born because of him,’’ Dennis said, referring to his father.

When Dennis, now 21, was 4 he went to a grocery store with his father wearing an Orr jersey. Another customer noticed it, and Dennis responded: “He doesn’t play,’’ he recalled saying. “He has a bad knee.’’