In high-stakes finale, Bruins were all in 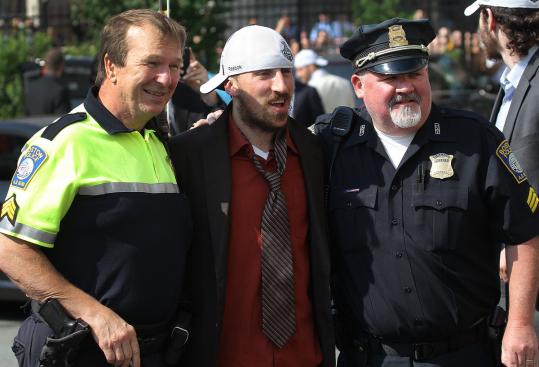 About the only thing that can stop Bruins spark plug Brad Marchand (center) in his tracks is a couple of Boston Police officers. (David L. Ryan/Globe Staff)
By Fluto Shinzawa Globe Staff / June 17, 2011

On June 6, the Everest-high Canucks strutted into TD Garden, eager to grab a 3-0 series lead and move a step closer to lifting the Stanley Cup.

That day, the Bruins decided that wasn’t going to happen. They would be the ones to claim the Cup.

At 5:07 of the first period of Game 3, Nathan Horton looked to his left, passed the puck to Milan Lucic, and approached the blue line. Vancouver defenseman Aaron Rome closed the gap and buried his shoulder into the Boston right wing.

Horton never saw Rome coming. Horton didn’t play again after the hit. His teammates, however, resolved that his absence wouldn’t torpedo their season. Instead, it would have the opposite effect.

“They really rallied around that,’’ said general manager Peter Chiarelli. “Horts had a terrific playoffs, too. He’s such a valuable contributor to the team.

“These guys, they can rally around anything. That probably was the turning point. But that’s the magic of this bunch. The core remained the same from last year. The year ended the way it did. They built on it.’’

That same day, the Bruins made what appeared to be a subtle lineup tweak. It turned out to resonate like a thunderclap.

Shawn Thornton had won a Cup in Anaheim. Since he signed with the Bruins on July 1, 2007, he has been a go-to player on the fourth line. The fact that Chiarelli landed the tough guy as soon as free agency opened that year indicates how highly he is regarded.

But in the playoffs, not everybody dresses. In the Eastern Conference finals, while Patrice Bergeron recovered from his third career concussion, Thornton skated on the fourth line for the first two games against Tampa Bay.

By Game 3, Bergeron was ready to play again.

One game earlier, Tyler Seguin had had the night of his life, recording 4 points in one period. So Thornton was the odd man out. And not just for Game 3. He was in suit and tie for the next seven games, including the losses in Games 1 and 2 of the Final.

The Bruins didn’t drop those games at Rogers Arena solely because of Thornton’s absence. They displayed shortcomings that filled coach Claude Julien’s notebook. They handled the puck as if it were toxic. They didn’t drive pucks deep into Vancouver’s zone. They didn’t generate enough speed in center ice to beat the Canucks to the puck. They never got their forecheck clicking.

So it was little surprise that the Bruins were blanked in Game 1, 1-0. And given how poorly they managed the puck in Game 2, it was no shock that Alex Edler picked off an Andrew Ference neutral-zone bank pass to spring Alex Burrows for the winning goal just 11 seconds into overtime.

So before Game 3, Julien and his staff agreed on a change that helped swing the series back in the Bruins’ favor. Seguin was out. Thornton was in.

That night, for the first time in the series, the fourth line had a heartbeat. Thornton, Daniel Paille, and Gregory Campbell combined for six shots and 11 hits. Despite losing Horton for the series, the Bruins rolled to an 8-1 win.

In the next four games, the Bruins racked up three more wins. The last and most important victory might not have taken place without that hard-hat unit.

As expected, the Canucks were flying when the puck dropped for Game 7. They were undefeated at home during the Final, and were committed to staying that way.

Four minutes in, Henrik Sedin sliced through the defense and cut into the crease. Defenseman Dennis Seidenberg was on his stomach. Goalie Tim Thomas was scrambling. Sedin didn’t get enough on his shot, though, and Thomas smothered the puck at 4:05.

Four seconds later, after Ryan Kesler beat Bergeron on the draw, Thomas had to boot out an Andrew Alberts point shot.

At 7:27, Daniel Sedin found an opening and slipped a backhander on goal. Thomas trapped the puck with his right skate, then reached back to make sure it didn’t cross the line.

During the following TV timeout, the Rogers Arena crowd reached another emotional level when injured winger Mason Raymond, wearing a full-torso corset because of his fractured vertebrae, flashed a thumbs-up on the scoreboard.

“Early on, they were getting pucks in deep,’’ Julien said of his grunts. “They were forechecking and doing exactly what we wanted to do. They were giving us momentum.

“I thought it was important to take advantage of those guys and keep putting them out there. They did a great job the whole series.

“When Thorny came in, that line took some life again. [Rich] Peverley moving up really did a great job of replacing Nathan. Our guys just fell into place. The puzzle sometimes falls into place and makes you look good.’’

Coaches often say that winning requires everyone — from the No. 1 center to the 12th forward — to pull the rope together. No passengers. All in. It is what makes the 2010-11 Black-and-Gold roster a once-in-a-generation collection.

More photos
Reaction
Sports coverage
Game 7 coverage
Your comment is subject to the rules of our Posting Policy
This comment may appear on your public profile. Public Profile FAQ