THIS STORY HAS BEEN FORMATTED FOR EASY PRINTING
STANLEY CUP VICTORY 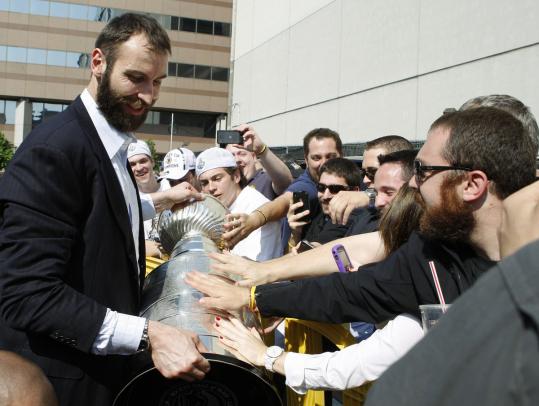 Through all the victory parades Boston has seen, the Bruins faithful wondered if they would ever again see the coveted Stanley Cup carried in triumph through the streets of Boston. Tomorrow morning, they will.

City officials announced yesterday that the parade would kick off at TD Garden at 11 a.m. The rolling rally will wind around Boston Common and the Public Garden, into the Back Bay, and finish in Copley Square.

Mayor Thomas M. Menino said the decision to hold the parade tomorrow was made to accommodate players who had commitments today.

“This is the players’ rally, not my rally,’’ he said. “We wanted to do what the players wanted. They’re the ones who brought the championship to Boston.’’

Boston teams have won seven championships since 2002, giving the city a wealth of experience in planning parades on short notice. At a planning meeting in City Hall yesterday, officials stressed the logistical similarities of tomorrow’s parade and the Celtics rally in 2008, the last time a local team won a title.

But for Bruins fans who have dreamed about a Stanley Cup for decades, this parade is special.

“This is the one we’ve been waiting for,’’ said Todd Cummings, a 26-year-old from Waltham riding the Red Line yesterday in a Bruins T-shirt. “People are going to come from all over to see the Cup back in Boston.’’

Hundreds of thousands of people are expected to line the route. Roads along the parade route will be closed from 9 a.m. until the conclusion of the parade about 1 p.m., and parking restrictions along the route will be strictly enforced. On Tremont Street near Government Center yesterday, “no standing’’ signs had already been posted.

State Police issued an advisory of construction delays in Interstate 93 north of Boston and asked drivers to seek alternate routes. City officials, meanwhile, said parking near the parade would be nearly impossible and urged fans to take public transportation.

To accommodate crowds, Massachusetts Bay Transportation Authority officials said the T will operate at near rush-hour levels through the day. Round-trip commuter rail tickets will be sold at a flat $10 rate and will also be sold on trains.

Service to the South Shore on the Old Colony and Greenbush lines, suspended last month on weekends for construction, will resume for the day on a Saturday schedule.

Officials advised riders to avoid North Station if possible and to add value to their tickets ahead of time.

To ease the anticipated traffic woes, the Red Sox moved their game tomorrow against the Milwaukee Brewers from 1:10 p.m. to 7:10 p.m. The Bruins will visit Fenway Sunday.

Police will be out in force tomorrow, officials said.

“Boston police will have a significant presence along the parade route as part of a comprehensive strategy to ensure everyone’s safety,’’ Police Commissioner Edward F. Davis said in a statement.

“I encourage fans to continue making the city proud and honoring the Bruins by celebrating responsibly.’’

City officials could not provide an estimate of the cost of hosting the event. The city plans to set up Jumbotrons on Boston Common and in Copley Square, so fans can follow the parade as it winds through the city.

The rally will feature 18 Duck Boats, about a dozen of which will carry players.

The Cup, of course, will be on full display, brought back to Boston for the first time since the Bobby Orr-led 1972 squad won the National Hockey League title.

The rally will not stop along the way, and players will not address crowds at City Hall Plaza as in previous championship celebrations. A Bruins spokesman said it was unclear whether players would address fans.

Yesterday morning, after landing at Logan International Airport just before 9 a.m., the Bruins took buses to the Garden, where several hundred fans gave them a hero’s welcome.

Stephen Smith of Medford raised his arms and whooped as the black-and-gold charter buses arrived at Causeway Street.

Proudly wearing their Bruins jerseys, T-shirts, and hats, fans said they had waited years for this moment.

“This is my dream,’’ said Janice Grassa, a 54-year-old from the North End who sported a soiled Bruins jersey with the faded signature of Bruin great Cam Neely.

“See how dirty this is?’’ she said, lifting the front of the jersey. “I’m not going to wash it until after the parade.’’

As the players got off the buses, fans chanted “Show us the Cup!’’ Bruins captain Zdeno Chara was happy to comply, hoisting the trophy high above his head.

“It’s awesome,’’ he said. “It’s an amazing feeling. We are so happy and thrilled. It’s unbelievable.’’

For fans who grew up mimicking the moves of their favorite players, the championship meant everything. Lenny Dutra, 29, of Fall River ditched his plumbing job yesterday to welcome home the team. His boss understood.

“He knows how much I love the Bruins,’’ Dutra said. “He told me to enjoy and have a good time.’’

More photos
Reaction
Sports coverage
Game 7 coverage
Your comment is subject to the rules of our Posting Policy
This comment may appear on your public profile. Public Profile FAQ