This 1-2 punch a tough combo 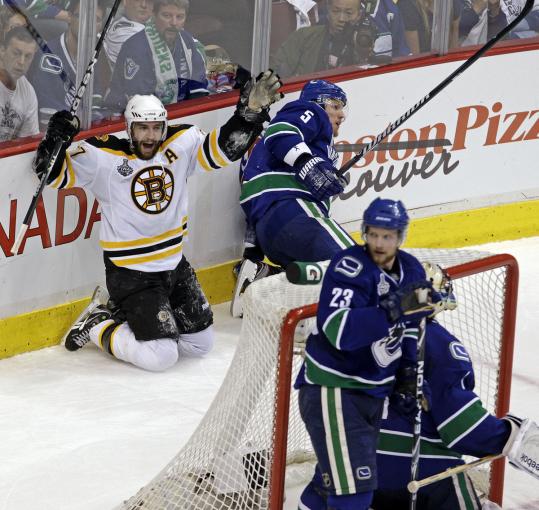 Patrice Bergeron brought the Canucks to their knees with a scrappy shorthanded goal in the second period that made it 3-0. (Jim Davis/Globe Staff)
By Cam Tucker Globe Correspondent / June 16, 2011

VANCOUVER, British Columbia — Forget the 1-2 punch of the Sedin brothers; how about the Patrice Bergeron and Brad Marchand combination?

Bergeron, a gold-medal winner with Canada at the 2010 Olympics, and Marchand, a two-time gold-medal winner for Canada’s national junior team in 2007 and 2008, brought that same championship-caliber hockey to the Bruins last night in a 4-0 Game 7 victory over the Canucks in the Stanley Cup Final.

“That doesn’t compare,’’ said Marchand of the world junior championships. “This is such a grind and such a battle and to be here and go through it for the whole year, over 100 games, it means so much more than just a few games.’’

Stories will be written about Tim Thomas. And deservedly so. But at the center of the sixth Stanley Cup in franchise history were Bergeron and Marchand, who each scored two goals last night.

Bergeron, as is his style, deflected credit.

“We couldn’t do it without everyone on the ice and also off the ice,’’ said Bergeron. “Going down, 2-0, against Vancouver, it was a tough road to come back.’’

If you believe in omens, Marchand was born May 11, 1988, which would be 16 years to the day the Bruins won the 1972 Stanley Cup, their last until last night.

In the fury of the celebration, the Bruins’ good-luck charm found time to share an emotional embrace with his family.

“It’s so surreal right now,’’ said Marchand. “You skate around and lift that Cup up, you can’t even believe it. You work your whole life for it and for it to be right there, it’s unbelievable.’’

The two linemates were the quick-strike jabs to the Bruins’ knockout punch, supplying all the offense the champs needed.

Bergeron opened the scoring at 14:37 of the first period and took the Canucks fans out of the game. Rogers Arena went silent.

He was the beneficiary of some incredible work along the boards by the shifty Marchand, who fed his linemate with a scintillating cross-ice pass.

Bergeron made no mistake, burying a one-timer past Canucks goalie Roberto Luongo, who barely flinched on the play.

But the duo wasn’t done.

Marchand gave the Bruins a 2-0 lead, a commanding one considering the way Thomas was playing, on a wraparound that barely squeaked over the goal line at 12:13 of the second period.

But it counted. And even though 27 minutes of hockey remained, it looked to be the nail in the coffin.

The Canucks looked disheveled. Their fans slinked into their seats.

Bergeron provided another blow, a shorthanded goal with 2:25 left in the second. It was an effort that exuded the will to win.

Given a partial breakaway from his blue line, Bergeron drove hard to the net, outworking Christian Ehrhoff and practically pushing the puck past Luongo.

“We wanted to come in and be a difference-maker,’’ said Marchand. “We knew we had to step up in this building. It’s very tough to play here and we always wanted to go out and work hard and leave it all on the ice.’’

The Canucks couldn’t regroup, and the two Canadians who have tasted international success finally got their hands on hockey’s biggest prize, the Stanley Cup.

“I’m going to kiss it,’’ said Bergeron. “I’m going to share it with my family and obviously first and foremost with the city of Boston and the Boston Bruins.’’

As this series wore on, it was the likes of Bergeron and Marchand, among others, who picked up for the fallen Nathan Horton, who was knocked out of the series with a concussion in Game 3.

Losing the first two games of the Stanley Cup Final to the NHL’s best team in the regular season is but a memory.

Bergeron put it best: “It’s tough to soak everything in, but at the same time, we’ve worked so hard. We believed in us that we could do it and we got the job done.’’

More photos
Game 7 coverage
Reaction
Video
Your comment is subject to the rules of our Posting Policy
This comment may appear on your public profile. Public Profile FAQ