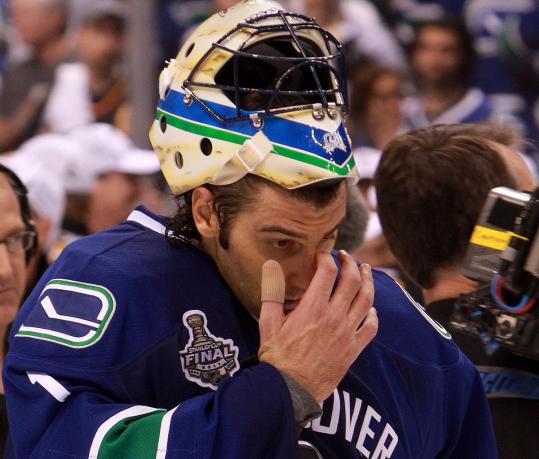 Roberto Luongo had his ups and downs in the series, the biggest downer coming as he leaves the ice after Game 7. (Barry Chin/ Globe Staff)
By Amalie Benjamin Globe Staff / June 16, 2011

VANCOUVER, British Columbia — After all the botched save attempts and soft goals, the ultimate miss came when Patrice Bergeron was sliding toward Roberto Luongo, the puck pushed toward the goal along with the Bruins forward. And as Bergeron passed through the crease, so did the puck, leaking past Luongo and into the net. In that moment, the focus and the game had slipped away from the Vancouver goalie.

By the end, when the Bruins were hoisting the Stanley Cup after their 4-0 win last night in Game 7, Luongo had allowed three goals on just 20 shots. He had proven to be a sieve, looking bad in game after game of the Final. The goals slid past him as the Bruins scored again and again and claimed their title.

“Listen, we’re all disappointed,’’ Luongo said, when asked if he took responsibility for the Canucks’ loss. “It’s a team game. We all wanted to do better, myself, we all want to be better. That’s the bottom line. It’s a team game. We’re not going to point fingers at one individual. If we all would have stepped up a notch, starting with myself, maybe we could have gotten the job done.’’

It wasn’t only Luongo’s fault — Vancouver scored just eight goals in seven games — but the goaltender didn’t make the offense’s job any easier.

So the quotes were repeated throughout the Canucks’ locker room after the loss, as the few players available kept talking about the team concept, about winning and losing together, about how the series loss can’t be blamed on Luongo.

There was a question as to whether coach Alain Vigneault would start Luongo in Game 7, after removing him for Cory Schneider in Game 6 in Boston. But, Vigneault said, Luongo was his guy. Luongo was in goal. And the Bruins took advantage.

Bergeron got the first goal, a one-timer off a Brad Marchand feed in the first period. It augured well for the Bruins, the team that scored first won each of the first six games in this series. The Bruins scored two more in the second period, and added an empty-netter in the third.

It was not Luongo’s finest moment — in a game he needed to be great, given the play of the goaltender on the other side.

“They worked extremely hard on the other side,’’ said Luongo. “You have to give them credit. They play a great system, they don’t give up much, and when they do their goaltender makes a save. They played us hard all series, and it came down to the last game.’’

And it came down to the goaltender, who came under fire for comments that were perceived as critical of a goal allowed by the Bruins’ Tim Thomas in Game 5.

And that was partly the fault of the man in front of their net.

“I think you work hard all year to get here,’’ Luongo said. “That’s the bottom line. No matter what the outcome is. If you lose it’s going to be devastating. It’s two great teams playing, and one team had to win. Unfortunately it wasn’t us.’’

More photos
Game 7 coverage
Reaction
Video
Your comment is subject to the rules of our Posting Policy
This comment may appear on your public profile. Public Profile FAQ