Veteran likely not on team’s radar 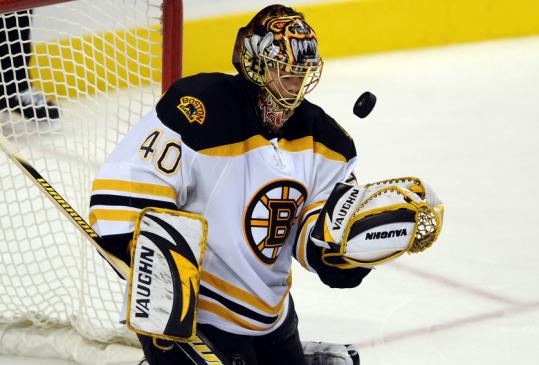 Under heavy pressure early, Tuukka Rask finished with 36 saves, including one on a breakaway in the final minute of regulation. (Michael Perez/Associated Press
)
By Kevin Paul Dupont Globe Staff / October 23, 2009

PHILADELPHIA - The Bruins have holes to fill in their lineup, especially up front where this week they lost Milan Lucic (fractured finger) and Marc Savard (broken bone in foot) for most, if not all, of next month.

What to do? For now, general manager Peter Chiarelli has patched the roster with one trade, acquiring forward Daniel Paille from the Sabres, plus with a boatload of minor leaguers. Newcomers Paille, Trent Whitfield, Brad Marchand, and Vladimir Sobotka all suited up last night vs. the Flyers.

As for veteran relief, the pickings are slim. One of the few names available is 39-year-old Brendan Shanahan, the aged power forward who is an unrestricted free agent after failing to catch on this season for a sunset tour with the Devils.

“Where is he? Well, at the moment, he’s about to have a haircut,’’ said Rick Curran, Shanahan’s longtime agent, when reached by phone yesterday. “I just spoke with him. He’s fine. He’s skating every day at Chelsea Piers [in lower Manhattan], and still hoping he gets a call.’’

According to Curran, there is one club, not the Bruins, that remains interested in acquiring Shanahan, a sure-shot Hall of Famer with 656 goals and 1,354 points, as well as three Stanley Cup rings (all with Red Wing logos).

The 6-foot-3-inch, 220-pound Shanahan was on Boston’s “person of interest’’ list last season before he signed with the Devils Jan. 15. By then, the Bruins were in high gear, en route to collecting 116 points and the top spot in the Eastern Conference.

Sell, sell, sell
According to nhl.com, more than 307,000 applicants registered to buy tickets to the Jan. 1 Winter Classic at Fenway Park that will have the Bruins and Flyers playing in the shadow of The Wall. Fans began to be notified this week that they were eligible to purchase tickets.

Meanwhile, the NHL stepped up its Classic marketing efforts here last night, handing all the Bruins and Flyers knit toques to wear instead of helmets during the warm-up. The Boston toque sported the cartoon-like “B’’ the club unveiled in September.

The equipment truck carrying all the necessary ice-making ingredients (except for water) will arrive at Fenway Park Dec. 10, and the first skating event is planned for Dec. 18. The Red Sox and Bruins have various on-ice events, including public skating, scheduled around the Jan. 1 game.

Details pertaining to those events are expected to be announced early next week.

Ruff stuff
Paille, who picked up a helper on Steve Begin’s game-winner against the Predators Wednesday night, hadn’t asked to be traded in Buffalo, nor did he feel the Sabres were about to move him. That said, he’s glad to be a Bruin.

“I never complained,’’ said Paille, who fell out of coach Lindy Ruff’s game-to-game plans and played only recently to fill a void while Thomas Vanek was sidelined by injury. “But I guess he had a couple of issues with me on the ice, thought I could be better . . . finishing checks and getting in scrums.’’

Overall, said Paille, he was glad the trade happened when it did.

“I’m happy it happened now rather than later,’’ he said.

“It’s only October, and it can be a long year if you’re not playing.’’

Minus symbol
Tough night for the Andrew Ference-Mark Stuart defensive pairing. They each finished a game-worst minus-3. Ference logged 19 minutes 17 seconds of ice time, Stuart 15:33. Stuart also needed a few stitches to close a gash on his upper lip after he was felled in the crease by a stick just before the Flyers’ Darroll Powe knocked home the 2-2 equalizer . . . Former UNH standout James van Riemsdyk, only 20 years old, picked up an assist for the Flyers. The rookie is 0-4 -4 in four games . . . The Bruins hot-footed it out of here after the game and caught a charter flight to Ottawa, where tomorrow night they’ll take on the Senators in the first of a half-dozen matchups between the rivals. It’s the only divisional game this month for the Bruins . . . Guillaume Lefebvre, called up earlier in the day from Providence, did not suit up. Nor did Shawn Thornton, nursing an undisclosed injury, make it back to the Boston lineup.