He is standing by action on Kelly 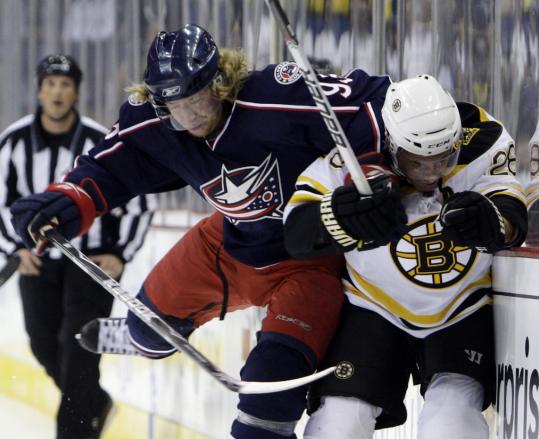 COLUMBUS, Ohio - Andrew Ference has read comments, ranging from former NHL Players Association president Trevor Linden to union graybeard Chris Chelios, that have been critical of the ouster of executive director Paul Kelly, which took place with a drop-the-gloves abruptness.

Ference, who played a central role in Kelly’s firing, still believes the right decision was made.

“Well, Linden’s not in the league,’’ Ference said of the former Canuck. “He hasn’t been in the meetings or been around what’s been going on. Cheli was involved. He was in the meetings. He was there for the decision and there for all the information. It’s interesting to hear what he has to say.

“But it’s like any other organization. We’re there to make decisions and make decisions for the group. That’s the way that real life works. People get elected into office, whether it’s at the government level or business level. They’re expected to take the responsibility to be educated and to make what are sometimes tough decisions. You can’t have the entire population vote on every issue. It just doesn’t happen in real life.’’

Ference, as part of a four-member committee, helped conduct interviews of NHLPA employees and an operational review of the union to determine Kelly’s fitness for the position. On Aug. 31, the 30-member executive board, in a 22-5 tally, voted to fire Kelly in an early-morning decision.

Last week, Linden voiced concerns to a Vancouver radio station about Kelly’s firing and how the NHLPA would hire a new executive director. Chelios, one of the 30 player representatives, acknowledged that the vote was abrupt. The player reps waited until after the vote to explain the firing to their teammates.

“Guys that say, ‘Oh, you need to have everybody vote on something that big,’ well, we had five guys voting on hiring [Kelly],’’ Ference said. “I didn’t hear too many guys complaining about the process of hiring him. We didn’t have 740 guys vote on that.

“So it’s not something that bothers me because it’s the majority of guys who were in that room. I’ve talked to quite a few of them, and talked to those who work at the PA and former players who are very supportive.

“Obviously some guys are a little louder than others when they give comments, and they get more play. But guys are very comfortable with the decision that we made. We did the right thing. It doesn’t make me feel any different from the moment that we had the meetings.’’

The player representatives have a conference call next week in which they’ll continue discussions regarding the search for the next executive director. While Kelly’s firing indicated that the players wanted a hard-line labor man to represent them when the current collective bargaining agreement, Ference said that’s not the case.

“Last time around, the decision was that we needed either a strong labor guy or a good business and marketing guy,’’ Ference said. “We got a lawyer, and he didn’t have expertise in either one.

“We need somebody who’s going to be proactive and a solution-maker - somebody who is working directly with the league. Obviously there are certain issues in the next CBA that are going to be extremely important to us. We have to work through those.’’

Right-wing policy
For most of last season, the Bruins had what one Western Conference executive considered “a perfect line’’ in Milan Lucic, Marc Savard, and Phil Kessel. Lucic provided the space-clearing muscle. Savard had the hands and vision to create offense at every turn. Kessel featured the defense-stretching speed and whistling wrister.

But with Kessel off to Toronto, the Bruins are looking for a new No. 1 right wing. Last Saturday against the Rangers, Michael Ryder got his crack. Last night against the Blue Jackets, it was Blake Wheeler’s turn.

“If we can generate some more puck possession in the offensive zone, that kind of ties into winning some more battles, and that’s when you start getting a ton of chances,’’ said Wheeler. “We were almost there.’’

Marco Sturm and Mark Recchi also might get some consideration for the slot.

Ryder is the purest goal scorer among the bunch. Sturm would come the closest to matching Kessel’s speed. Wheeler also brings good skating and offensive abilities. Recchi doesn’t have wheels like Sturm and Wheeler, but he has the most blue-collar style of the group and could be a dangerous net-front presence. However, Recchi has existing chemistry with Patrice Bergeron and Chuck Kobasew.

“They’re all different looks,’’ Julien said. “Rex may not be the speedster, but he’s got the skill and he goes to the spots. He’s got a great shot. When you’ve got a great feeder, that could work at times.

“You’ve got Sturm, who has Kess’s speed and can give you the resemblance of last year’s Phil with his speed. You’ve got Ryder, who’s also a sharpshooter that Savvy can feed. Wheels also has pretty good speed at times, good outside speed.’’

Dany boy
Dany Sabourin, starting in goal last night, allowed five goals in regulation, then saw Antoine Vermette and Nikita Filatov net shootout goals as the Bruins dropped a 6-5 decision at Nationwide Arena. Given Tuukka Rask’s stranglehold on the No. 2 job, Sabourin could be assigned this week. Sabourin must clear waivers before landing in Providence . . . Last night was Ference’s first preseason appearance. He scored a power-play goal in the first period when jumped up and took a tape-to-tape cross-ice pass from Bergeron. “We’ll see how it reacts and take care of it,’’ said Ference, who underwent groin surgery in June. “Just that progression of keep stacking it on. Once the season starts, you don’t have the luxury of backing off on certain days. Training camp is nice that way.’’